The FDA is getting feisty as a cascade of early research on the effectiveness of COVID-19 bivalent boosters, which were authorized without human data, intersects with embarrassing headlines about “rebound” infections for highly inoculated federal officials.

Public health officials stand to get even more defensive amid revelations that Pfizer is sharing undisclosed booster efficacy data with the White House and that boosters may actually weaken immune systems’ ability to fight COVID.

He told CNBC the studies, which have not yet been peer-reviewed, are too small to generate real conclusions before Pfizer and Moderna provide data from their clinical trials.

The studies nonetheless show bivalents are “generally at least as good or better as the original vaccines in generating an immune response, particularly to [Omicron subvariants] BA.4/BA.5 and other newer variants,” Marks said, referring to temporarily increased antibodies, not longer-term immunity or better protection against severe outcomes

It’s not clear Marks has been privy to the latest Pfizer data. Politico reported Thursday afternoon the drugmaker was “slated” to give unidentified Biden administration officials bivalent efficacy data that day, continuing a year-old pattern of the White House leading the FDA in vaccine decisions.

In November 2020, @pfizer did what it could to slow the release of (apparently) hugely positive vaccine data that would help Donald Trump days before an election

Today, with Joe Biden in the White House, they appear to be sitting on lousy data – playing the same game in reverse. https://t.co/hlEbzaopn3

Titers rose 13.2-fold from “pre-booster levels” in that age group a month after boosting, compared to a 2.9-fold increase for the original booster. The bivalent increase was 9.5-fold in ages 18-55.

“Based on all the data we now have in hand, we have confidence in the bivalent covid-19 vaccines and their ability to create better protection against covid-19, including these currently circulating variants, than the original vaccine would have,” Marks told the Washington Post.

FDA press officer Abby Capobianco declined to tell Just the News whether “all the data we now have in hand” includes the undisclosed White House Pfizer data.

The drugmaker reportedly paused its Twitter ad spending in protest of new owner Elon Musk’s feared light-touch approach to content moderation. The platform suspended a user for more than two months until he agreed to delete a tweet “gently poking fun” at Pfizer CEO Albert Bourla, the newly reinstated user claimed in a thread Thursday.

I found the irony of his statement rich, and attempted to add to the hilarity by gently poking fun at Bourla by QT-ing him. Within a few minutes, Twitter gave me a 12-hour soft suspension, meaning I could access my account but could not tweet. Offending tweet in screenshot below. 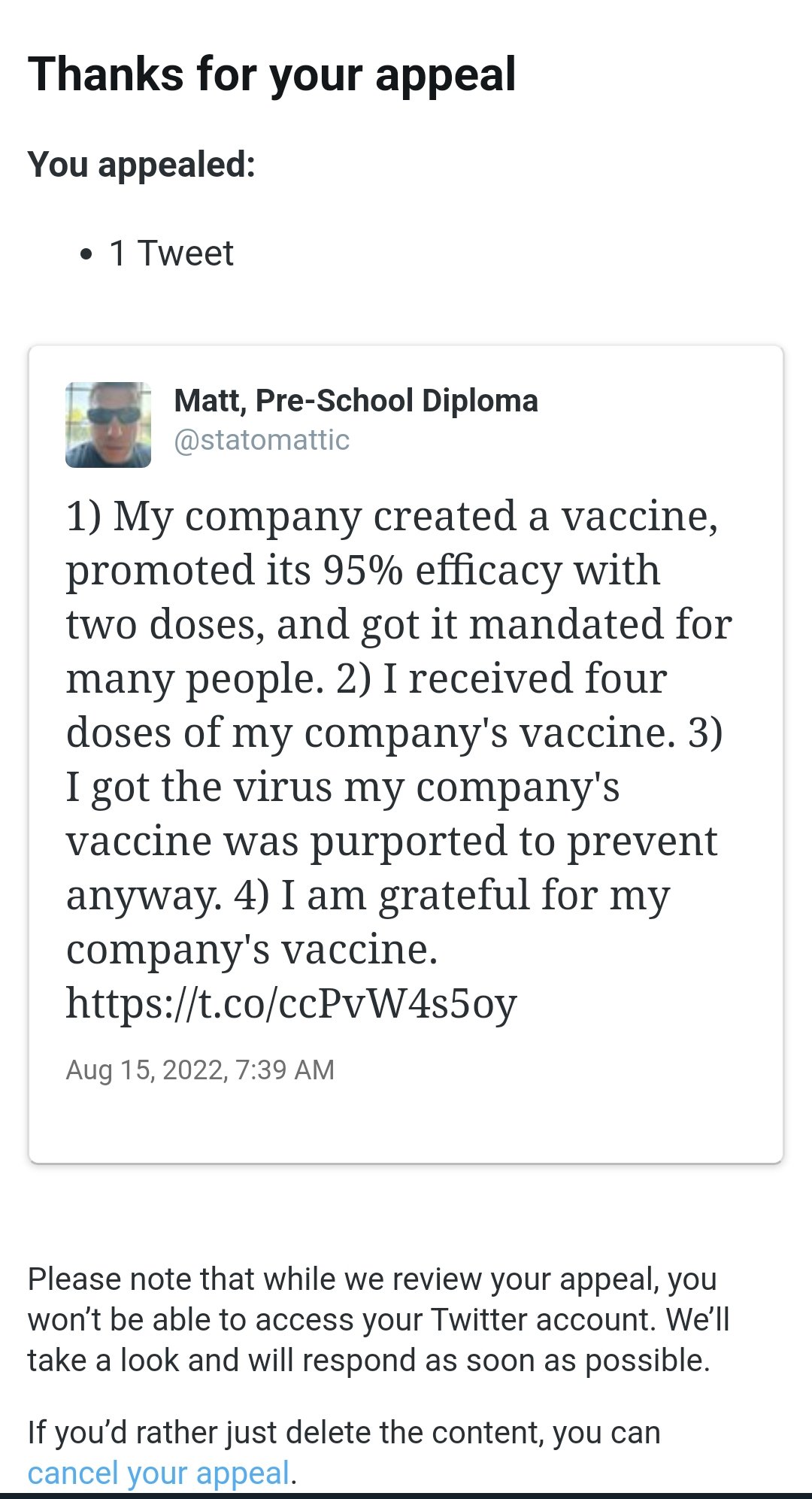 Each suffered a subsequent rebound infection shortly after taking Paxlovid. Pfizer’s clinical trial data said rebounds happen in only 2% of cases, but it only tested unvaccinated patients.

The focus on rebounds is “distracting us from the basis for the Emergency Use Authorization … a substantial reduction in death and hospitalization for high-risk patients” rather than a “change in duration of symptoms or viral load reduction,” Califf wrote Tuesday.

“Real world studies published after Paxlovid was authorized have generally been consistent with the reduction in mortality that was observed in the clinical trial,” he said. “Randomized Controlled Trials (RCTs) are now underway” to understand the rebound phenomenon.

“I have never seen the FDA commissioner promote a specific drug product before,” University of California San Francisco epidemiologist Vinay Prasad tweeted Wednesday, saying he received a flurry of messages from agency-watchers along the same lines. “They usually wait until they’re not working at the FDA to start marketing for Pfizer,” said Prasad, citing ex-commissioner Scott Gottlieb as an example.

The big Q is not what to do about Pax rebound, but who actually benefits from Pax pic.twitter.com/jGvspwk6tp

Prasad faulted Califf for neglecting to mention the Paxloxid study population was unvaccinated, categorically different than the healthy, 53-year-old, quintuple-jabbed Walensky. Califf, he said, is referring to “sh**ty real-world observational study data” confounded by socioeconomic differences in Paxlovid uptake when he points to post-authorization studies.

Those studies still differ on the age threshold for Paxlovid benefit — a question not tackled by RCTs, Prasad claimed. “You fail the American people every day you allow this product to be pushed without actually knowing who benefits,” he said, questioning the mainstream scientific reaction if the Trump administration did this.

It was a pleasure joining @HypochonActor to discuss @US_FDA’s important work, the threat of misinformation, the updated #COVID booster and @SeanHayes’ proclamation that his benefits outweigh his risks. Look forward to chatting again, Sean & @WaliPriyanka! https://t.co/lM6QlS9Uia pic.twitter.com/5DuRiJ9V6h

The Qatari research team responsible for the study that found natural immunity outperformed Pfizer’s vaccine in previously uninfected people, published in the New England Journal of Medicine this summer, has a new preprint study not yet peer-reviewed that could complicate the White House bivalent-booster crusade.

The two-dose cohort had a more favorable “adjusted hazard ratio” (0.43) than did the three-dose cohort (0.53) versus the unvaccinated cohort when it came to reinfection. Compared to each other, the booster cohort had a higher likelihood of reinfection than the primary-series group (1.38).

The “most interesting result of the study to me,” tweeted University College London Genetics Institute Director Francois Balloux, “is actually not the effect (or lack thereof) of the third dose of vaccine, but that: ‘No reinfection in any cohort progressed to severe, critical, or fatal COVID-19’.”

The Qatari research team has “consistently produced robust studies during the pandemic,” he said, while noting the “retrospective observational” design could afflict the study with “all sorts of biases,” such as greater likelihood of those who boost to “test upon mild or asymptomatic Covid.”

Seattle tech CEO Kevin Gemeroy, who moved his family to Arizona in late 2020 so his kids could attend school in person, pointed Balloux to surrounding King County, Washington’s COVID dashboard by vaccination status as evidence that the booster backfire was real.

This divergence can’t be explained as a result of less common unvaccinated testing, he said: Walgreens’ national COVID dashboard shows the unvaccinated are testing more frequently than every jabbed group except those inoculated more than a year ago. They also have the lowest positivity rate in the most recent weekly figures.

The dashboard has its limitations, but you can quickly see that those who are boosted are getting infected at higher rates than those who are 2x vaccinated. pic.twitter.com/hIqNMFuyWS

And for those who inevitably will say that the unvaccinated aren’t being tested as frequently, the opposite is true according to the Walgreens data dashboards located here (go to #3):

The highest period of negative efficacy appears to be 9-11 mos.https://t.co/tXjTtEfJBi pic.twitter.com/T1fbLr9kqU