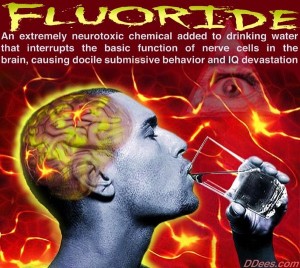 Mr. Charles Perkins, a chemist, wrote a book called “The Truth About Water Fluoridation.” He explains that Hitler and the Nazis devised a plan to control the population by making them docile, unresisting and also cause sterility. The master plan became the use of medication in the form of fluoride.

Later the Russian communists went on the bandwagon, feeling it would fit their plans well to dominate the world.

But fluoridated water is still flowing. Today, the practice is thriving as the American Dental Association and governments have convinced a great majority of the public that fluoride is needed to preserve our teeth – especially children’s teeth.

The results of ingesting fluoride in water and toothpaste, especially on a daily basis, are quite the opposite – fluoride causes illness and lowers I.Q.  Children are especially vulnerable to its effects.

Here’s some of the effects of fluoride:

Fluoride is not only in the water but in food and medicine processed with fluoridated water.

However, studies show fluoride has no real benefit in preventing tooth decay. In fact, most of mainland Europe does not fluoridate their water and their teeth are just fine – or even better than Americans.

In the 1950s, a study showed extreme damage to lungs and lymph nodes in experimental animals due to fluoride. Unfortunately, the study was suppressed.

There is a definite connection between children’s I.Q and fluoride in the blood, according to Dr. Paul Connet, Director of the Fluoride Action Network. In fact, the I.Q. levels in those areas were even lower that the standard, acceptable level. Further, fluoride is even more toxic than lead and a little less toxic than arsenic, so the danger is made worse. Even at the lower fluoride level, a bottle-fed baby gets 175  more times fluoride than breastfed babies. That’s fairly dangerous, considering these brains are still developing.

At present, 75 percent of the population adds fluoride to water and toothpaste. It’s been classified as a drug and is the only drug added to the water supply. This severely violates informed consent, the right to take or not take a drug and certainly the right not to be forced to take one or be ignorant of  the fact it is in our very water supply.

The use and enforcement of fluoride appears to be quite a bit less innocent that the apparent claim that it prevents tooth decay – on which it has little if any effect. In fact, it causes damage to the outer layer of teeth.

Considering all the poisonous fluoride waste from such things as glass production, phosphate fertilizer and others, the bright idea came up to create a story that fluoride was good for teeth and so it was then added to the water supply. That way, the manufacturers could get rid of it while making an income from it. But that is not how it actually began.

Journalist Christopher Bryson spent ten years writing a book called “The Flouride Deception,”  which tells the history of this dangerous drug.  After WW II, there was a government campaign which resulted in adding it to toothpaste and later, it was put into all the water supplies. 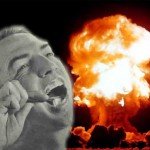 He reveals the details of how it started in the 1940’s in the U.S. The Manhattan Project (making of the atomic bomb) needed fluoride to produce plutonium and uranium for weapons. However, the fluoride was greatly damaging to the workers in these plants and resulted in many lawsuits.

There was also damage in the facilities that were making fluoride in a certain part of New Jersey, causing a blighting of crops and illness.

In an effort by the government to avoid massive lawsuits for all this growing damage and to calm the public’s fears, they ordered a campaign to promote fluoride as safe and effective for tooth decay. However, if more people knew sodium fluoride is used to make rat poison, they wouldn’t have been be so convinced, would they? And we shouldn’t be either.

According to thesecretmoongarden.ning.com, it is illegal to dump fluoride waste and is considered an act of terrorism. But it’s legal. Also, it says most of the fluoridated water is used for showering, gardening and laundry. That means the water flows into our lakes and rivers, causing more contamination.

However, the ADA persists in asserting fluoride is safe and effective in preventing tooth decay. Why is that? It’s because if they don’t, they would have to eat crow and admit they were wrong; fluoride is not good for you and will make you sick. They lose credibility.

On a positive note – the Supreme Court of Israel has also decided to ban fluoride in their country by this year, according to Natural News.

This country is lagging behind but, still, about 70 states have rejected or discontinued its use. We should take our cue from the 19 countries who have rejected fluoride in there water supply.

To rid your water of fluoride, certain water filters will remove it effectively, such as reverse osmosis, natural spring water and distillation. It’s a shame we have to go to such lengths and expense to take something out of our water that should never have been put in.

The evidence is clear that the use of this waste material and dangerous poison, fluoride, causes illness and lowers I.Q. when used in water. Does a nation of zombies come to mind?

L. Femine is a Staff Writer and The Print media Director for The Liberty Beacon project.