Part 3: Greece, the sacrificial lamb –  France is the real target

Today, May 19, continuous TV news has been full of scenes of unusually violent protest around France, with a police car getting smashed and set on fire with the occupants still inside.  This after weeks of heated demonstrations nationwide.

So to what degree is the hand of Brussels behind all this, that is to say the unelected members of the EU Commission along with its partner in crime, the IMF?

An excellent article published in RT in French explains via documentary evidence how the reforms to the French economy, demonstrated in the Macron Law and Khomri Law, have been both demanded and managed by the EU Commission.

Specifically, it identifies an EU Commission report on France from February, 2016 which praises the move the French government has made toward putting employment negotiations in the hands of individual companies and away from professional organizations in the various professional fields, such as pharmacists, insurance, notaries, etc. The report also praises the degree to which the firing of workers has been simplified.

Would that score an 7.5/10 for the French government bending to the dictates of Brussels?

Another EU Commission report to the French government issued a few months earlier, in July of last year, wanted to see a move away from the two categories of employment contract that currently shape the job landscape in France – the CDD or temporary employment contract, and the CDI which guarantees a permanent job. In other words, Brussels was demanding to see the permanent contract done away with in favour of employment conditions which permit companies to pay less if needed, and to employ someone only during those times of need.

The new reforms have largely accomplished those demands.

Just where does the democratic will of the majority fit in here?

RT goes on to note how similar reforms have been made in Italy under Mateo Renzi’s government in the so-called ‘job act’, which has redefined job contracts and made firing easier. And in Spain under Mariano Rajoy, who has also loosened up the conditions under which employees can be let go.

In France, these labour market reforms have been negotiated with Brussels as part of a larger package of reforms including pensions and unemployment insurance, and a reduction in public spending.

And what does France get for bowing to this pressure?

Mere leniency from Brussels over France’s inability to reduce its budget deficit according to an agreed-upon timeline has been obtained at the price of accelerating the dismantling of the labour code starting with the Khomri Law: 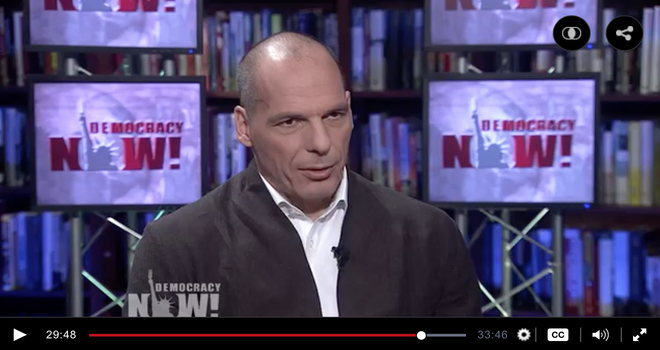 Yanis Varoufakis, Greece’s ex-finance minister, has a flair for exposing the unelected globalists at the heart of the EU and has unique experience in dealing with them since it was he who negotiated with Germany and the IMF the first two Greek bailout loans. These loans, he says, the largest in human history, he never wanted: they were foisted on Greece.

He puts the situation concerning France this way, which can be found in the following video starting at 23:30 minutes, in an interview he gave recently to Democracy Now!:

Amy Goodman: Is Greece being used as an example by Germany, a kind of warning to France?

Yanis Varoufakis:  In the economic reality, there is absolutely no doubt about that. One of the few wonderful aspects of having served for 5 or 6 months sitting on that electric chair of the finance minister of Greece was that for the first time in my life I didn’t have to theorize about these issues. I was told. German officials of the highest rank answered your question in the affirmative. They said to me explicitly, ‘how can we let you off the hook when we want the troika to go to Paris and rein in the French national budget.’ So a proud nation like the Greeks is being used as collateral damage – its misery is being used as a signal to France that it cannot have its cake and eat it.

By that what I mean … and the German elites have a point of sorts. The French elites always wanted to rule over Europe, to be the administrators of Europe using German monetary credibility to do so. And the Bundesbank and the German government want[s] to smack them for this. Unfortunately, they are smacking them by smacking Greece and pushing the Greek nation into an awful, frightful recession.

Now when Europe uses whole populations as instruments for the pursuit of nineteenth century-like power politics, you know that there is something deeply rotten in the kingdom of Europe.

Deeply rotten, indeed. Not least because few sources are willing to reveal who is really responsible for the rottenness and cynicism that is steamrollering citizens into increasing hardship.

And as of yesterday, the violent demonstrations in France took on a whole new ugliness.

We can hope that Brussels is paying close attention, but Greece still got sacrificed when citizen protests there took on the same tone.

Pam Barker is a TLB staff writer/analyst based in France. She has an extensive background in the educational systems of several countries at the college and university level as a teacher and administrator.

IMF Now Ready To Slam The Door On The U.S. And The Dollar

Two Years After A Resounding “No” Vote, Greece Still Says “Yes” To Austerity