Freedom for me but not for Assange (or thee): The breathtaking hypocrisy of CNN’s Christiane Amanpour

CNN anchor Christiane Amanpour has some strange ideas about democracy and journalism, believing her colleagues to be above elected officials – but only if they have the correct politics and serve the right masters, obviously.

“We need to guard against leaders delegitimizing the press,” Amanpour exhorted her colleagues on Wednesday, speaking at the Royal Television Society awards ceremony in the UK. Arguing that the current British government – just like the Trump administration in the US – is trying to marginalize the mainstream media, she called for their own version of NATO’s Article 5: “an attack on one of us is an attack on all of us.”

We need to guard against leaders delegitimizing the press.

Journalists are the pillars of democracy and freedom.

Let’s have our own “NATO Article 5”: an attack on one of us is an attack on all of us. https://t.co/GVw0ALfH0x

The rant came during an acceptance speech for the achievement award Amanpour received from the RTS, for spending “over four decades covering major conflicts and campaigning for media freedom and the safety of journalists.”

This is incredibly rich on so many levels, given that WikiLeaks publisher Julian Assange has spent nearly a year in a British prison and is currently attending hearings on his extradition to the US, based on spurious charges that essentially seek to criminalize journalism. Has Amanpour so much as mentioned him? Of course not.

These are all your tweets about the journalist most severely threatened by the Trump admin: 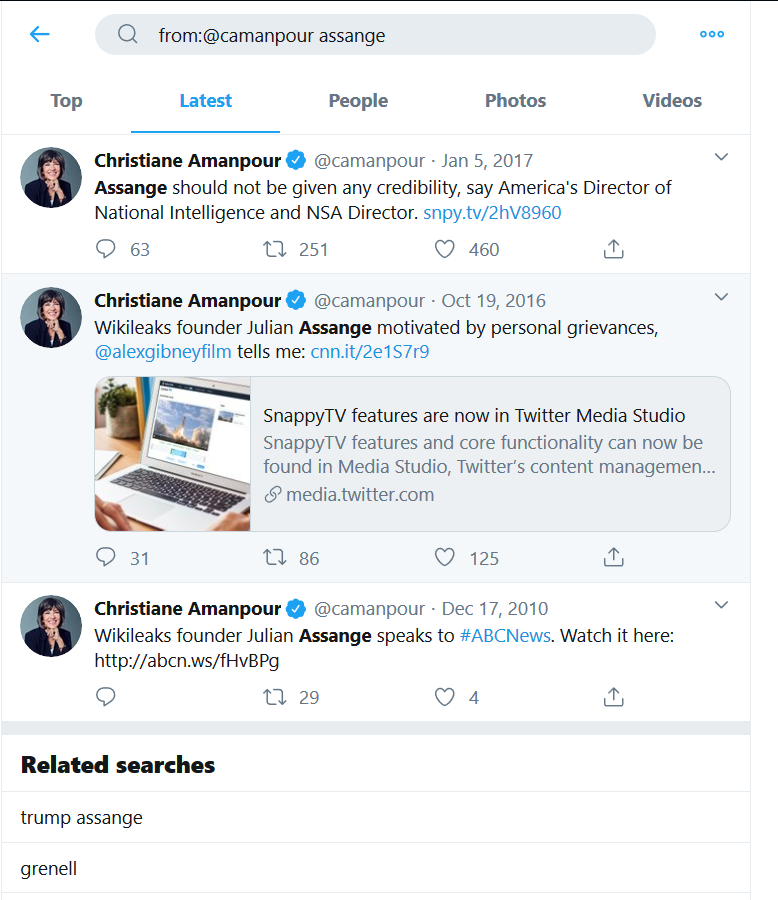 You see, Assange isn’t a ‘real’ journalist to her. Only those working for CNN and other mainstream outlets need apply.

They are the “pillars of democracy and freedom,” as she put it. Presidents and prime ministers democratically elected by the people? No way! “They may be there for a few terms, journalists are there forever,” according to Amanpour.

Again, the sheer hypocrisy is astounding. During the 1999 Kosovo War – illegally launched by NATO against what was then Yugoslavia – Amanpour was literally in bed with the Clinton administration, having married State Department spokesman James Rubin in 1998.

She certainly didn’t preach about the sanctity of journalism at the time, as NATO was busy murdering Serbian TV journalists that dared contradict its official propaganda line – which Amanpour and CNN dutifully parroted.

NATO and the protection of journalists really shouldn’t be in the same sentence!

Not that this was difficult for her, as she’d made her name during the Bosnian War a few years earlier by openly championing “advocacy journalism” – damn the objectivity, news should serve an agenda. Amanpour’s agenda just so happened to coincide with one of the parties in the conflict and later the Clinton administration’s desire to assert US power over the UN and the EU. So what if she reported on ‘Serb atrocities’ from Croat cities and pretended to be on the front lines when she was in fact nowhere near? It all served a higher truth, don’tcha know?

Her network has also become notorious for this sort of approach – which manifested openly in the Trump era with CNN’s obsession with the ‘Russiagate’ conspiracy theory and anything that would fit the worldview best summed up as ‘Orange Man Bad.’

Worse yet, even as it doubled down on covering Trump in a way that would make decent journalists blush if applied to any other politician, CNN insisted that they were the real victims – just as Amanpour did on Wednesday.

By adopting the advocacy approach and pushing ‘Russiagate,’ CNN and other mainstream media did more to delegitimize themselves than any of Trump’s derogatory comments possibly could. Yet even as they cry bloody murder every time Trump calls them fake news, CNN journalists campaign to ban people from social media, or threaten to doxx private citizens who made memes.

The insistence of Amanpour – and those applauding her – that journalists are some sort of special protected category, of vital interest to freedom and democracy, betrays a fundamental misunderstanding of the US Constitution’s First Amendment, which guarantees free speech to everyone, not just a privileged few.

Nebojsa Malicis a Serbian-American journalist, blogger and translator, who wrote a regular column for Antiwar.com from 2000 to 2015, and is now senior writer at RT. Follow him on Twitter @NebojsaMalic

The scurry of rats: Ohr worried Comey’s firing threatened to expose their plot