Lauren Boebert, a mother of four with outspoken views on guns and fringe internet theories, has uprooted Colorado Rep. Scott Tipton. Her primary victory is part of a larger political insurgency taking shape across the country.

Tipton, the incumbent, (Pictured Rt.) had served five terms in Congress and was endorsed by Donald Trump. Apparently unbothered by her victory, the president took to Twitter to congratulate Boebert on her “really great win.”

Boebert’s colorful political ads and staunchly conservative platform made her a popular target of praise – and mockery – on social media. In one campaign video, she explains that she is raising her four sons to be “strong men” and will not allow them to grow up in a “socialist” nation.

“Their freedom IS my motivator! Threaten the liberty of Americans, and I’ll be there to hold you accountable!” reads her tweet.

In 2019, she grabbed headlines after attending a rally of then-Democratic presidential hopeful Beto O’Rourke (Pictured), during which she told him: 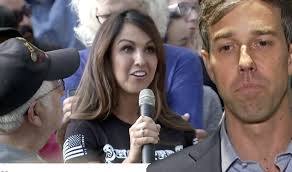 “I was one of the gun-owning Americans who heard you speak regarding your ‘Hell yes, I’m going to take your AR-15s and AK-47s.’ Well, I’m here to say, ‘Hell no you’re not.’” Boebert, a fierce gun advocate, is the owner of Shooters Grill in Rifle, Colorado. The cafe is famous for its armed waitresses and encourages patrons to also pack heat.

She has also publicly stated her belief in the internet ‘QAnon’ theory, which alleges that Trump has an elaborate plan to dismantle the ‘Deep State’. She said that she “hoped” the theory is true because “it only means America is getting stronger and better and people are returning to conservative values.”

A spokesman for the National Republican Congressional Committee declined to pass judgment on her beliefs, arguing that Democrats should first disavow “dangerous conspiracy theorists like Nancy Pelosi and Adam Schiff” who are haunting the halls of Congress with their “wide-eyed claims” that Trump is a “secret Russian double agent under the control of the Kremlin.”

Although Boebert’s victory came as a surprise, she’s far from the first rogue candidate to uproot establishment Republicans. In May, Jo Rae Perkins, another QAnon supporter, won a Republican Senate primary in Oregon. Another outsider and QAnon backer, Marjorie Taylor Greene, will compete in an August congressional primary runoff in Georgia.