On January 31, two Chinese nationals staying in a hotel in York, became the first confirmed cases of COVID-19 in the UK, but the earliest transmission in Britain is thought to have occurred on January 28 to a man in Surrey who had not travelled abroad recently. It was not until one month later, on February 28, that Britain would see its first official fatality – a woman in her seventies treated at the Royal Berkshire Hospital in Reading – who, according to chief medical advisor Professor Chris Whitty, caught the virus in the UK. By March 1, there were cases reported in Wales, Scotland and Northern Ireland, before it was declared a pandemic by the World Health Organisation (WHO) 10 days later, leading to the closure of schools, restaurants, pubs and leisure centres, before a full lockdown was introduced by the Government on March 23.

Said to have originated from Wuhan, China, in December, a recent study by researchers at University College London and the University of Reunion Island, found COVID-19 may have made the jump from its initial host to humans at some point between October 6 and December 11.

Looking at the Office of National Statistics (ONS) official death figures, Express.co.uk identified what experts have now determined to be a “spike” in fatalities in England and Wales between adults 45-85+ starting on week 45 of 2019 – November 8 – with the same figures being almost 1,000 deaths higher than the previous year and around 200-300 higher than the five-year average.

The ONS confirmed to Express.co.uk that there were 129,821 deaths registered in England between October and December 2019, 6,752 more deaths than the five-year average (2014 to 2018) for this quarter and that age-specific mortality rates significantly increased between this same timeframe for all age groups aged 75 years and over, in comparison to the year before.

Dr Jason Oke of the University of Oxford says these deaths need to be studied further to understand their implications.

He told Express.co.uk: “I’m interested in looking at this excess in deaths, but it depends on what you compare to, if you look back at other data, the expectation of what happens is quite variable year-on-year.

“Life expectancy has plateaued now, but it’s been going up for a while, so you would expect, perhaps, fewer deaths in later years.

“I think these comparisons are tricky – it’s very easy to see the effects of COVID, because the jump is so large – there’s no mistaking those because the magnitude is so big.

“But, smaller deviations are a bit more difficult to determine what’s going on, or whether that’s just an artefact.”

Dr Oke said there were no doubts over a significant rise in deaths among the elderly before Christmas, but said it was hard to put a finger on whether they could be attributed to coronavirus without further investigation.

He added: “If there were excess deaths before Christmas, I don’t think everyone would necessarily think that was because of COVID, unless there is some further evidence.

“Doctors don’t specify the cause of the influenza-like illness, now they write down the specific cause of being COVID, but before, no one wrote down that it was Influenza Type B on the death certificate.

“They just wrote down that the person died of what looks like the flu.”

Dr Oke acknowledged the possibility they could be attributed to an unknown virus, but called for further investigation to confirm.

He added: “It is entirely possible they could have been dying from an unknown detected undiagnosed version that looks like the flu. 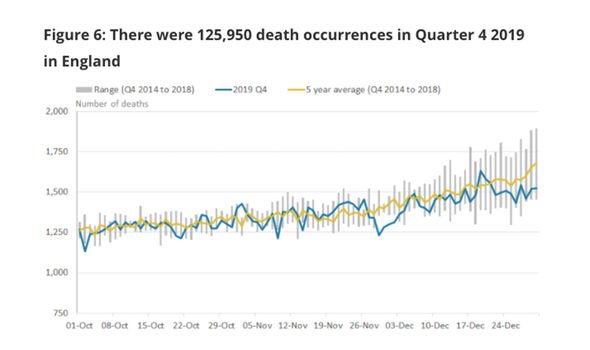 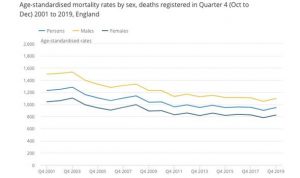 “The ONS monitor excess deaths around winter and that season before, there was nothing remarkable over what is expected.

“We’ve been looking at these excess (deaths) overtime, and modulating deaths over time for about five years and you do see these winter spikes and drops.”

Looking at the data, Dr Oke said he would not have expected such a high rise in deaths for a mild winter.

He added: “What we noticed was, at the end of 2019 – a mild winter – the number of deaths should relate to how cold it gets.

“So if you have a mild winter, you should have fewer deaths in the elderly.

“We were just looking at whether we’ve been hit particularly bad by COVID, because what it’s done is it has taken some of those people who would have gone in a cold winter had it been there. 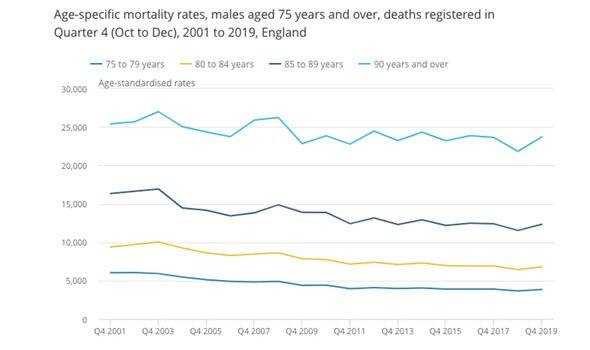 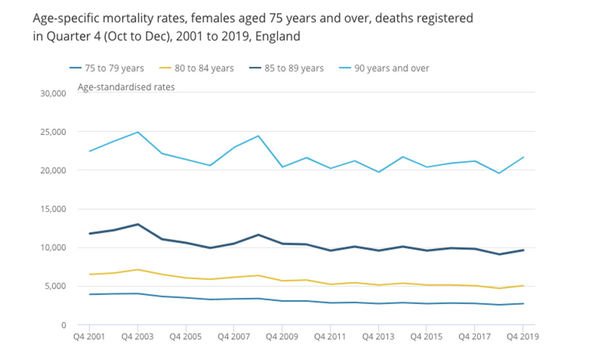 “If you do an accumulative number over the years, they come to roughly the same, but in women over 85, the difference is really large.

“So it looks like about 8,000 fewer deaths compared to the year before, it’s a large disparity, you don’t normally see those often.”

Dr Oke said he would “support a public inquiry that would lead us to understand when the first case came into the UK and how far it had spread before the lockdown”.

Dr Amitava Banerjee of University College London says it is impossible to attribute these deaths to coronavirus by just looking at the data, adding that he did not experience a jump in respiratory deaths while working in hospital.

The deadly virus has now infected just shy of five million people worldwide, claiming the lives of more than 300,000 and affecting billions more in the process. In the UK, the earliest transmission is thought to have occurred on January 28, but it was not until one month later, on February 28, that a woman in her Seventies became the first Briton to die. By March 1, there were cases reported in Wales, Scotland and Northern Ireland, before it was declared a pandemic by the World Health Organisation (WHO) 10 days later.

This led to the closure of schools, restaurants, pubs and leisure centres, before a full lockdown was introduced by the Government on March 23 as deaths began to spike.

But, two leading UK scientists say it could have been circulating weeks earlier than the first reports among the healthy population.

Dr Amitava Banerjee of University College London told Express.co.uk that flights coming in and out of London may have been to blame, suggesting there could have been isolated cases before Christmas.

He said: “There’s undoubted evidence, particularly with our lack of testing until the end of March, that it’s quite possible we did have earlier cases.

“I work as a clinical doctor and we weren’t seeing excess deaths in hospitals during winter.

“So I would say it was early March, end of February where we started to see these, but, of course, there might have been the odd case and with London – Heathrow and other airports – being such hubs, it’s not only likely, but probable that we had many cases that we didn’t see.

“If we were seeing hundreds of deaths, per month throughout November and December, that’s something we would see in hospitals.”

But Dr Banerjee also stated that he did not experience a jump in respiratory deaths while working in a hospital.

He added: “We’re very good, as doctors, at knowing if things were getting worse, and my sense was that I don’t remember seeing more pneumonia.

“I made the shift into COVID care in late February and March, so even if we were missing care home deaths, they would have had to have started somewhere.

“However, I do think it’s quite possible that the virus was in the UK between October and December, we know that people were flying from China, Hong Kong, every day, sometimes several times a day.

“All it takes is one person, so some cases would have been possible, but lots of cases, it’s less probable, because we would have expected to see people with severe pneumonia admissions.

“But, one thing to factor into all of this is most of the people who die from COVID have been people with underlying conditions and people who are older, so this at-risk group are the people who we’ve been shielding and watching.”

Dr Banerjee said he thought the first cases from healthy individuals to the elderly started developing around January or February.

Express.co.uk also spoke to Professor Keith Neil, an expert in the epidemiology of infectious diseases at the University of Nottingham, who agreed with Dr Banerjee’s transmission theory, but placed the date a little later.

He said: “It is quite possible COVID-19 arrived in the UK much earlier than thought but it did not really start to produce lots of chains of transmission.

“This probably took off with skiers returning from Italy and Austria as in Germany.

“The excess deaths per week runs for much longer than COVID-19 earliest reports suggest.

“I think the most likely event was the skiers around February half-term, we know it was in Italy and France in large numbers, even before the Italians recognised it.

“If the virus was in the UK in October, the infection rate would go up three times every week, so within a month its exponential growth would be huge.” (ER: this is not how French doctors have reasoned the same phenomenon – of slow-to-start infection, followed by a month-long infection frenzy.)

Despite this, Professor Neil said there may have been the odd case at the start of the year.

Covid-19 more Widespread but NO MORE DEADLY THAN FLU