ER Editor:  This would bring the number of UK military bases to a total of 17 if the plans go ahead. See also UK to Establish New Overseas Military Bases After Brexit – Report.

In ‘Post-Brexit Expansion’, UK Plans Military Bases On China’s Doorstep And In Caribbean

“This is our biggest moment as a nation since the end of the Second World War, when we can recast ourselves in a different way, we can actually play the role on the world stage that the world expects us to play,” the British Conservative MP and Secretary of State for Defence said. “For so long — literally for decades — so much of our national view point has actually been colored by a discussion about the European Union.” 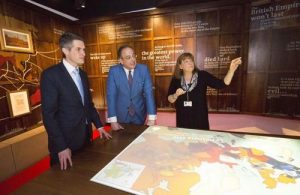 And while discussing future military bases abroad, he said:

This is our moment to be that true global player once more – and I think the Armed Forces play a really important role as part of that.

The 42-year old Williamson, in his second year as Defence Secretary, added of the post-Brexit future that, “We have got to be so much more optimistic about our future as we exit the European Union.”

Suggesting a reversal of policies active during the final decades of the decline of the British Empire, he said under his watch the 1960s policy of pulling back from areas “east of Suez” has been scrapped and expressed a desire to “recast” the UK’s role and leadership in the world.

On this point, Williamson hearkened back to the empire, saying “the rest of the world saw Britain standing 10 feet tall –when actually we stood six feet tall– Britons saw us standing five feet tall, not the six, and certainly not the 10.” He said further, evoking British settlement in Canada, New Zealand, and “nations right across Africa” – that they “look to us to provide the moral leadership, the military leadership and the global leadership.”

“They realize that we are good partners and actually the values that we stand for, of tolerance, democracy and justice, these are the values that they hold dear to their hearts,” said Williamson.

Concerning military bases, perhaps the more controversial part of his interview, he proposed Singapore or Brunei in the Pacific – deep in what China considers its sphere of influence – as potential sites for a base, asserting that “if we have economic interests there, we should have a military interest there.” He also mentioned a potential base in the small South American country of Guyana, or on Montserrat in the Caribbean islands.

But many populations across the globe might be confused on the basic assumption that Britain is currently not imperial, given that merely within the past two decades it has joined allies like the United States in military adventurism and occupation in places like Iraq, Afghanistan, Syria, Libya, and Kosovo, and while increasingly sailing near China, testing Beijing’s resolve to defend its claims in the South China Sea.