During his tenure as the director of national intelligence, James Clapper has maintained a classified blog. It’s called “Intercept,” and is only accessible to people within the intelligence community with clearance to access the government intelink site. It even offers a secret RSS feed so analysts will never miss a post. Clapper’s Intercept blog has no relationship to The Intercept, except that he hates pretty much everything we stand for. In one of his posts, written in May 2013 and obtained by The Intercept, Clapper posted a handwritten letter he says he received from “a constituent in Nevada.” It’s unclear what makes this person a constituent since Clapper was not elected to any office. In any case, this constituent “discusses supporting the IC’s [intelligence community’s] position on civil liberties” in the aftermath of the Boston Marathon bombing.

“If the american [sic] people are not willing to release some freedoms, they cannot blame the IC when they can’t stop” domestic terror attacks because of the intelligence agencies “having their hands tied by Law [sic] & policy,” the “constituent” wrote. He adds that Americans “cannot have your cake and eat it too,” and then offers what has become a dangerous cliche in the post-Snowden mentality of the intelligence community: “So if one has nothing to hide why would a little government watching for mass protection be such a big question.” The letter ends: “WE SUPPORT YOU.” 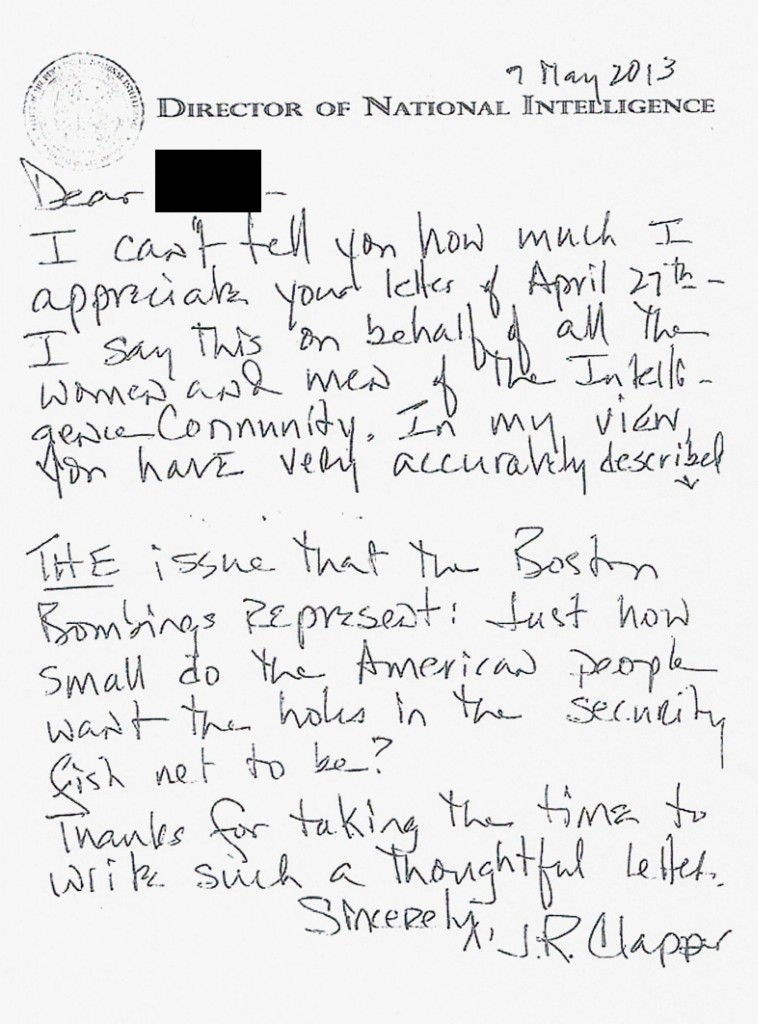 That someone in the U.S. would write such a letter to Clapper is not controversial. A lot of people have made this same ridiculous argument over and over. But Clapper’s response to the letter, which he also shared on his Intercept blog, is not surprising, but nonetheless disturbing. “I can’t tell you how much I appreciate your letter,” Clapper wrote. “I say this on behalf of all the women and men of the Intelligence Community. In my view you have very accurately described THE issue that the Boston Bombings represent: Just how small do the American people want the holes in the security fish net to be?”

But soon after Clapper’s post, it became clear he did not actually speak for “all of the women and men” in the intelligence community. While the blog is only available to people with proper security clearance, Clapper does welcome commenters. The first two intelligence people to comment on his post took Clapper, and his “constituent,” to the woodshed. “I think it was inappropriate for DNI Clapper to respond in a way that indicates he agrees with the premise of the writer’s letter, namely, that government must expand its domestic “watching” and the people must give up “some ‘rights’ in the interest of the greater good,” one IC commenter posted. “The head of the US Intelligence Community — the business of which is foreign intelligence —should not be taking sides on matters of domestic intelligence policy.”

Another commenter wrote that, like Clapper, he agreed with the letter’s author about “the fact that it is impossible to defend 100% against these kinds of attacks given the restrictions placed on America’s security forces and the freedom and range of targets enjoyed by the attackers.” However, this commenter, who went by the name Wormy, warned against being “too quick to release your freedoms and “rights” in the name of security.”

Among the points Wormy made:

Wormy concludes with the following:

“The Constitution and the Bill of Rights have survived for centuries, defended by courageous man and women both in the armed forces, in various civil rights movements, and just individual citizens standing up for themselves and others. They have made incredible sacrifices and endured tremendous hardships to pass these sacred rights down to you. Do you want to be part of the generation that threw it all out because a group of Islamic radicals is posing a threat to you that statistically doesn’t even come close to the threat posed to you by lightening [sic]?”

We don’t know if Clapper ever responded to Wormy or other commenters. But we do know that Clapper is a big fan of expanding domestic surveillance operations and doing away with some civil liberties in the name of security. *Clapper has submitted his resignation, but rest assured his successor will carry the torch of domestic surveillance. Will the Intercept blog continue to secretly publish under the new administration? As Donald Trump would tweet, Stay tuned!

Documents published with this story:

TLB recommends other pertinent articles at The Intercept.com

About the writer Jeremy Scahill