The lead juror in the Roger Stone trial is a former Democratic congressional candidate who hates President Trump, and actively posted anti-Trump material online during the trial, according to Cernovich.com and the Daily Caller.

Tomeka Hart (Pictured here/Twitter) admitted to being a Stone trial juror in a Facebook post expressing outrage after four prosecutors withdrew from his case on Tuesday in protest of the DOJ revising the longtime Trump adviser’s recommended sentence of up to nine years in prison for a process crime (while James Wolfe, the former Senate Select Committee on Intelligence (SSCI) staffer who leaked a top secret FISA application to his mistress, journalist Ali Watkins, was sentenced to just two months in prison).

“I have kept my silence for months. Initially, it was for my safety. Then, I decided to remain silent out of fear of politicizing the matter,” Hart wrote on Facebook, adding “But I can’t keep quiet any longer.

CNN first reported Hart’s post but did not note that she was a Democrat. Commercial Appeal, a news outlet affiliated with USA Today that spoke to Hart, reported details of her professional background. Those details match up with the same person who ran for Congress in 2012. A Politico reporter who covered Stone’s trial identified Hart as a former congressional candidate. –Daily Caller

Meanwhile, Hart – who was a Democratic congressional candidate in Tennessee in 2012, has a Twitter history littered with anti-Trump propaganda and was actively posting on social media during the trial. This, as attorney and journalist @Techno_Fog points out, raises questions over how she responded to the juror questionnaire which asked specific questions regarding social media, the Mueller investigation, and running for public office.

Her Twitter feed shows dozens of references to Trump, many of them links to negative stories about the Republican. In a Twitter post on Aug. 19, 2017, Hart quoted a tweet referring to Trump as the “#KlanPresident,” in an apparent reference to the KKK. –Daily Caller

The judge in the Roger Stone case rigged the case against Stone and should never ben allowed to hear a case ever again!https://t.co/vHZoMwBbvM

Here is the Tweet from one of the jurors who voted to convict Roger Stone, from the same day. pic.twitter.com/p54zkoMDCB

On that Roger Stone juror –

Of the utmost importance will be her responses to these juror questions on:

(1) Social media and the Mueller investigation

If she answered in the negative… things will get interesting.

Now it looks like the fore person in the jury, in the Roger Stone case, had significant bias. Add that to everything else, and this is not looking good for the “Justice” Department. @foxandfriends @FoxNews

One of the jurors on the Roger Stone show trial is the wife of an official who still works at the DOJ division that took down Stone!

The Oabama-appointed judge Amy Jackson says this is ok! 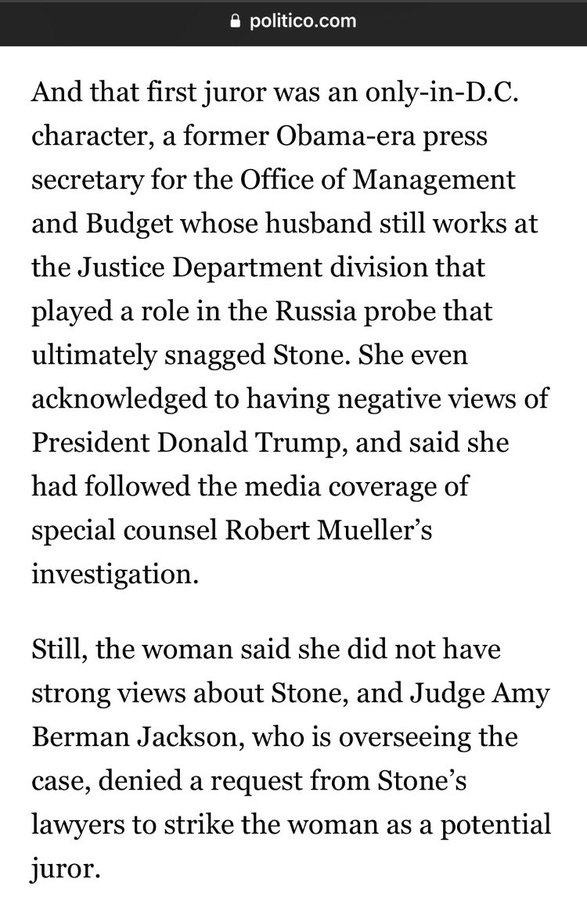 Stone, who was arrested in a dramatic pre-dawn FBI raid for a process crime in January, 2019, argued that he would be unable to receive a fair trial in Washington D.C., according to the Daily Caller. He was convicted on November 15, 2019 on five counts of making false statements to Congress, along with one obstruction charge and one witness tampering charge.

The government lawyers quit the Stone case after the Justice Department ordered a revision to the U.S. attorney’s office’s recommendation that Stone serve between 87 months and 108 months in prison on false statements and obstruction charges related to the House Intelligence Committee’s Russia investigation. –Daily Caller

It’s worth noting Robert Mueller knew Russian collusion was a farce when he went after Roger Stone. His goal was to catch Stone in a process crime to feed the media hysteria of a hoax Mueller knew to be untrue. Roger Stone was PERSECUTED.

It’s Mueller who belongs in prison.

Everything Is Fake: Top 40 Pieces Of Fakery In Our World – Part 1

Has Drug-Driven Medicine Become A Form Of Human Sacrifice?