“Lockdowns For Thee, But Not For Me” – Newsom, Pelosi Attend Dinner Parties

As Joe Biden’s camp continues to try and walk back talk of another national lockdown, Democratic leaders are once again exhibiting via their behavior that social distancing restrictions and lockdown rules are “for thee and not for me.” In an incident that may remind readers of Nancy Pelosi’s quarantine-time visit to a San Francisco Hair Salon, California Gov Gavin Newsom has been busted attending a swanky party at one of California’s top restaurants.

According to the SF Chronicle, Newsom attended a birthday party for one of his top advisors at the French Laundry, the Michelin-starred restaurant run by Thomas Keller. The paper noted that the party included members of “several households”, in violation of the recommendations delivered by Newsom’s administration, which has urged Californians to retreat to their personal bubbles and only leave for “essential” purposes. Current state regulations limit any type of social gathering to members of no more than three households, tops.

The dinner the night of Nov. 6 at the famed French Laundry in Yountville in Napa County brought together at least 12 people to celebrate the 50th birthday of Jason Kinney, a longtime friend and political adviser to Newsom who is also a partner at the lobbying firm Axiom Advisors. In addition to the governor, his wife, Jennifer Siebel Newsom, was in attendance. State guidelines limit gatherings, defined as “social situations that bring together people from different households at the same time in a single space or place,” to no more than three households. Representatives for Kinney and Newsom declined to specify how many households the diners represented, but did not dispute that it was more than three.

Click said the birthday dinner for Kinney was permitted because state guidelines require only that restaurants “limit the number of patrons at a single table to a household unit or patrons who have asked to be seated together.” A spokesperson for the public health department was unable to answer questions about whether the state considers it acceptable for residents from an unlimited number of households to mix if the gathering is at a restaurant.

At a news conference Friday, state Health and Human Services Secretary Mark Ghaly reiterated that activities where it is difficult to wear a mask the entire time, such as dining, and mixing with people from other households are higher-risk situations during the pandemic. “As we look at surging cases, we have the guidance and the tips for a reason,” he said. “We believe they are the strategies to keep ourselves and our communities safe, and we hope and expect people to take them seriously.”

When first approached by the Chronicle, Newsom’s camp tried to deny that the gathering violated the state’s guidelines. But after the story was published, Newsom released a comment saying attending the party was “an error in judgment” (just in case you thought President Trump and his team were the only ones who lie to or mislead journalists).

The California Department of Public Health issued guidelines on Oct. 9 allowing small private gatherings for the first time during the pandemic. Under the guidelines, gatherings that include more than three households are prohibited.

The state also requires that gatherings be held outside, where experts believe virus transmission is far less likely.

Amusingly, Newsom wasn’t the only California politician to attend a social gathering this week while governors around the country are imposing new restrictions and even moving to move schools back to remote-only.

Nancy Pelosi held a dinner for incoming Democratic members of Congress. She told reporters that the venue was “very spaced” with enhanced ventilation.

Leigh Ann Caldwell@LACaldwellDC
House Dem and GOP leaders are holding respective dinners for new members. .@SpeakerPelosi told me it’s safe. “It’s very spaced,” she said and there is enhanced ventilation and the Capitol physician signed off. 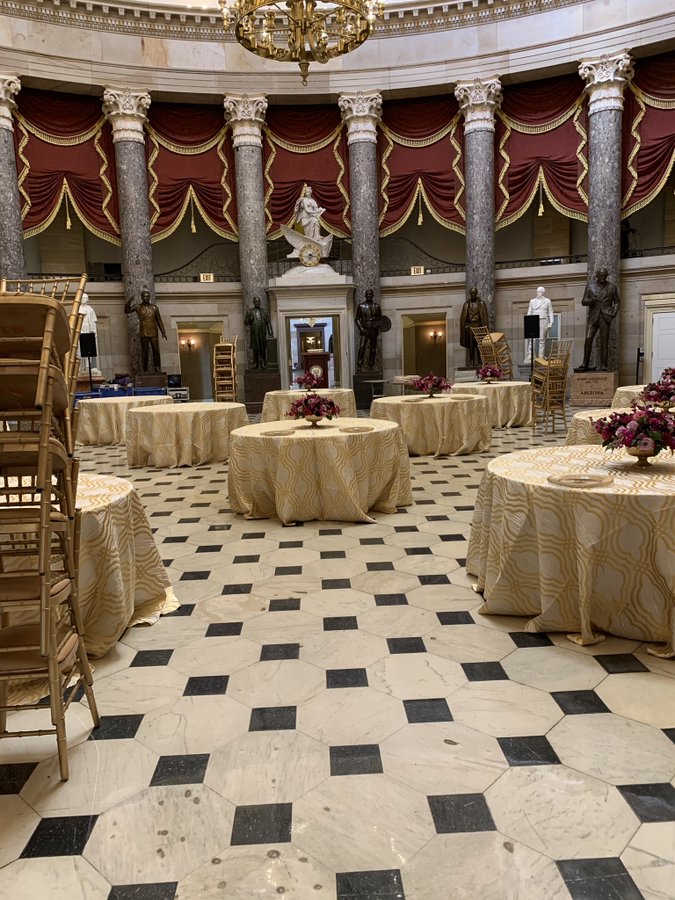 (TLB) editor: The above is a copy and paste of the original post picture. When we tried to get it directly from Twitter, we received this notice:

By all means, we must protect our esteemed Elites and keep the common man from viewing their secure work areas. (TLB)

Newsom also joined with the governors of Washington State and Oregon to urge Californians not to leave the state unless it’s absolutely necessary, until things get under control.

1 Comment on “Lockdowns For Thee, But Not For Me” – Newsom, Pelosi Attend Dinner Parties