Reminds him of Kabul

Top GOP Senator Mitch McConnell has likened stepped-up security in the nation’s capital to his trip to war-ravaged Afghanistan, arguing the measures are excessive and based on a non-existent “threat” to lawmakers. (RT-USA News) 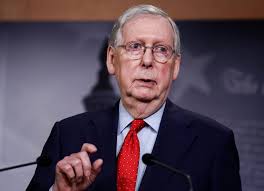 “I’m extremely uncomfortable with the fact that my constituents can’t come to the Capitol. With all this razor wire around the complex, it reminds me of my last visit to Kabul,” the Kentucky Senator told reporters on Wednesday, adding “I just checked earlier this morning. There are no serious threats against the Capitol.”   (McConnell pictured from a PBS Screen grab.)

I think we are continuing to overreact based on current threat levels… It looks terrible to have the beacon of our democracy surrounded by razor wire and National Guard troops.

While McConnell acknowledged “some changes” are needed to protocols at the Capitol complex in the wake of the January 6 riot, he nonetheless argued the safety precautions – including a 5,000-troop National Guard deployment – are not necessary.

Democratic Senator Dick Durban (Illinois) leveled similar criticisms against the massive display of security theater on Tuesday, saying a fence circling the Capitol – standing 10 feet tall and topped with razor wire – is “ghastly,”“unacceptable” and an “embarrassment” to the country.

Both Senators’ comments follow a House-commissioned review of the Capitol’s policing and surveillance measures earlier this week, which found numerous staffing and management problems with the Capitol police and issues with the building itself. The review recommended the hiring of more than 850 new Capitol officers and the construction of a permanent “mobile fencing option” surrounding the facility, among other things.

Though the DC National Guard deployment – initially 20,000-strong ahead of Inauguration Day – was scheduled to wind down later this week, a request from local police to retain more than 2,000 troops in the capital for another two months was approved by the Pentagon on Tuesday.

The approval came after an alleged “militia plot” to storm the Capitol prompted House lawmakers to cancel a session last Thursday, though police offered few details about the purported scheme and Senators apparently determined the threat was overblown, as the upper chamber met as usual without incident. Nonetheless, police and some lawmakers continue to sound alarms about the dangers posed by “domestic terrorists” and militia groups, even when unable to point to any specific or credible threat.

(TLB) published this article from RT-USA News with our thanks for the coverage.