LEFTIES ARE JUST MOBBING ADMINISTRATION OFFICIALS’ HOMES AND TALKING ABOUT SHUTTING DOWN OPPONENTS’ TV NETWORKS BY FORCE, NO BIG DEAL.

Protestors are chanting “NO JUSTICE NO SLEEP!” and “FREE THE KIDS!”

Neighbors are outside, looking out of windows pic.twitter.com/XUYQxjY5Ul 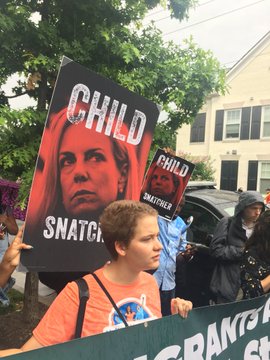 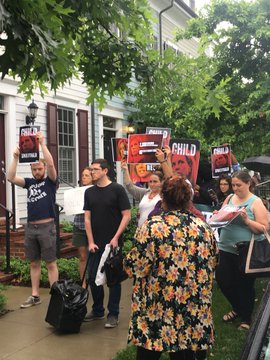 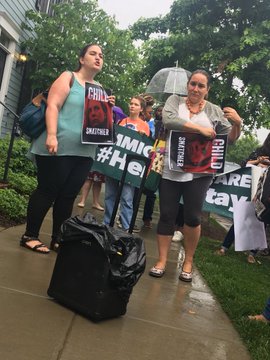 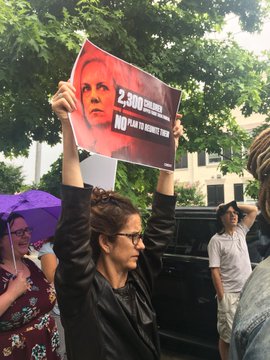 About two dozen protesters with the progressive group CREDO Action chanted with megaphones, waved signs that read “child snatcher” and played the ProPublica audio clip of immigrant children being separated from their parents at the border, HuffPost reported.

Ms. Nielsen was forced to walk by protesters shouting “Shame!” when she left her house, according to video posted on social media. One man shouted, “You belong in the Hague!” and, “You’re a modern-day Nazi!” [Said the protester acting like a Nazi.] as Ms. Nielsen entered her vehicle and left.

“There’s a child snatcher living in Alexandria, Virginia,” Ms. Hess said in a statement. “Rightfully so, there’s a huge amount of attention focused on the border and the detention centers but the people who are making the decisions are here in DC, so it’s important to shine a spotlight on them as well.”

The protest took place just three days after Ms. Nielsen was chased out of a Mexican restaurant near the White House by protesters with the Metro DC Democratic Socialists of America.

Is The US Headed For A Soft Civil War? A Political Scientist’s Worries.

“I think we’re at the beginning of a soft civil war,” political scientist Thomas Schaller told Bloomberg’s Francis Wilkinson.  “I don’t know if the country gets out of it whole.”

I know many of you disagree. But I am struck that rational people continue to express such concerns. Why do you think this is so?

Related: Progressivism is wrecking cities in the Pacific Northwest:

Portland, Oregon, has continued to experience rapid urban decay in recent years, and the consequences for businesses and residents have been dramatic. In 2016, Columbia Sportswear, a major retailer, relocated a considerable number of its staff to downtown Portland. A little over a year later, in a scathing opinion piece in the Oregonian, the company’s CEO voiced his regret over the decision. Employees reported repeated criminal offenses, “daily defecation” in the store’s front lobby, and fears of physical violence. One female employee ran into moving traffic to escape a transient individual, screaming that he was going to kill her.

Conditions for other Portland companies have deteriorated as well.

A cynic would argue that the tears were artificial, intentionally forced out of tear ducts and emotions faked. Maybe so, but this then raises the question of why they felt driven to such emotional manipulation of the audience.

And what if the emotions were real? What could drive seasoned professionals to such a loss of self-control if manipulation were not the intent?

I think the answer in both scenarios is the same: genuine mass hysteria is gripping the mainstream media. The first source is the political rise, election, and continuing successes of Donald Trump, currently presiding over the best economic times since the Reagan administration. Trump violates all the political norms that they learned, embraced, and enforced in their own rise to media prominence. When norms are violated, anger is the dominant response of members of the group that holds the norms.

But what accounts for the hysteria that results in loss of self-control? I think a second factor is at play. The mainstream media perceive that they have lost the ability to shape public perceptions beyond the 30% or so of the populace that is committed to left-progressivism. The majority of the public no longer trusts or believes what they have to say. And this sense of powerlessness in the face of a hated opponent is literally driving them crazy. Even before the Rasmussen poll showed the futility of their efforts (“54% of Likely U.S. Voters say the parents are more to blame for breaking the law … only 35% believe the federal government is more to blame for enforcing the law”), they must have realized that their efforts were failing. Knowing no other means of persuasion than intensifying the current efforts, they pulled out all the stops: anger and sadness replaced facts and logic, which don’t really stand up to scrutiny anyway.

Andrew Malcolm, writing at Hot Air, describes the awful truth to which they are awakening with horror every day: they no longer have traction.

And “traction” is essential to their self-esteem.

THE LEFT IS REALLY HATING LIVING UNDER THE NEW RULES THEY’VE CREATED: Blue check Resistance appalled Sarah Sanders tweeted name of restaurant that kicked her out.

As Greg Pollowitz of Twitchy tweets, “Lot of this going around. Server at restaurant bragged about it online and it went viral. If [Sanders] didn’t tweet about it, she would have been asked about it. She probably had emails from reporters in her inbox when she tweeted.”

How dare someone on the right use social media to blow up the reputation of a restaurant — only we’re allowed to do that!

UPDATE: It’s all smoke and mirrors.

(TLB) published this article from IWB with our appreciation for the availability.

The “News” Is Content-Free