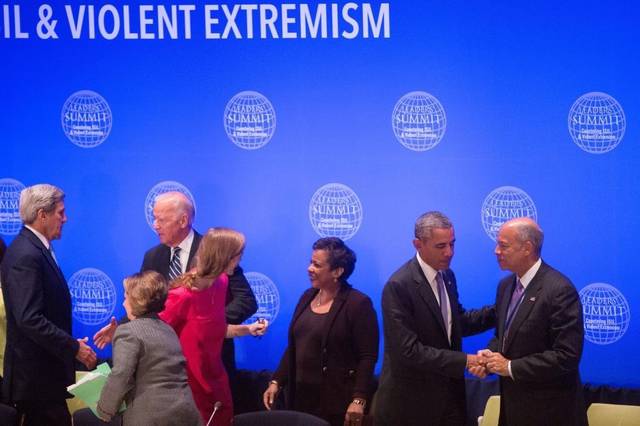 A Global Police Force to Fight “Extremism” in US Cities

Did I call it or what? On Tuesday, in referencing the Muslim refugee resettlement program of the Obama administration, I said that it was a step to Balkanize and terrorize the West. I warned that as soon as the chaos ensues from this invasion, the United Nations will be more than happy to step in on US soil to “keep the peace.” Lo, and behold, the Obama administration has just made it known they are preparing for just such an event.

On Wednesday Sept. 30th, Property-grabbing Loretta Lynch told the United Nations that the Attorney General’s office, working with several US cities, will be working on a global law enforcement initiative. She referred to this initiative as the Strong Cities Network.

So, what is this for? It’s an attempt to enforce the sharia-compliant UN’s rules on America. It’s unauthorized by Congress and it’s unconstitutional.

According to the DOJ announcement, “Cities are vital partners in international efforts to build social cohesion and resilience to violent extremism.  Local communities and authorities are the most credible and persuasive voices to challenge violent extremism in all of its forms and manifestations in their local contexts.  While many cities and local authorities are developing innovative responses to address this challenge, no systematic efforts are in place to share experiences, pool resources and build a community of cities to inspire local action on a global scale.”

The reason there are no systematic efforts and that is because it is unconstitutional to do so. States have the right to deal with matters on their own without Washington or the UN interfering. It’s called the Tenth Amendment.

“The Strong Cities Network will serve as a vital tool to strengthen capacity-building and improve collaboration,” said Attorney General Loretta E. Lynch. “As we continue to counter a range of domestic and global terror threats, this innovative platform will enable cities to learn from one another, to develop best practices and to build social cohesion and community resilience here at home and around the world.”

The program launched without a word in the media on Wednesday. The claims is safety and security and “safeguarding the rights of local citizens and communities,” but we all know different, don’t we?

According to the DOJ release:

The SCN will connect cities, city-level practitioners and the communities they represent through a series of workshops, trainings and sustained city partnerships. Network participants will also contribute to and benefit from an online repository of municipal-level good practices and web-based training modules and will be eligible for grants supporting innovative, local initiatives and strategies that will contribute to building social cohesion and resilience to violent extremism.


The SCN will include an International Steering Committee of approximately 25 cities and other sub-national entities from different regions that will provide the SCN with its strategic direction. The SCN will also convene an International Advisory Board, which includes representatives from relevant city-focused networks, to help ensure SCN builds upon their work. It will be run by the Institute for Strategic Dialogue (ISD), a leading international “think-and-do” tank with a long-standing track record of working to prevent violent extremism.


Again, when did the Constitution provide for such things as SCN? Who will determine who “extremists” are? Will these extremists be some of the administration’s previous persons they have labeled as potential terrorists? The Obama administration has already scrubbed references to Islamic jihad from terror training materials and in its place has offered potential terrorists as the following:

1. Those that talk about “individual liberties”

2. Those that advocate for states’ rights

3. Those that want “to make the world a better place”

4. “The colonists who sought to free themselves from British rule”

7. Anyone that holds a “political ideology that considers the state to be unnecessary, harmful, or undesirable”

8. Anyone that possesses an “intolerance toward other religions”

9. Those that “take action to fight against the exploitation of the environment and/or animals”

14. “Opposition to equal rights for homosexuals and lesbians”

15. Members of the Family Research Council

16. Members of the American Family Association

17. Those that believe that Mexico, Canada and the United States “are secretly planning to merge into a European Union-like entity that will be known as the ‘North American Union'”

19. Members of the Federation for American Immigration Reform

20. Members of the Tennessee Freedom Coalition

21. Members of the Christian Action Network

22. Anyone that is “opposed to the New World Order”

23. Anyone that is engaged in “conspiracy theorizing”

25. Anyone that is concerned about FEMA camps

26. Anyone that “fears impending gun control or weapons confiscations”

29. Those that “don’t think they should have to pay taxes”

30. Anyone that “complains about bias”

31. Anyone that “believes in government conspiracies to the point of paranoia”

32. Anyone that “is frustrated with mainstream ideologies”

33. Anyone that “visits extremist websites/blogs”

34. Anyone that “establishes website/blog to display extremist views”

35. Anyone that “attends rallies for extremist causes”

36. Anyone that “exhibits extreme religious intolerance”

37. Anyone that “is personally connected with a grievance”

38. Anyone that “suddenly acquires weapons”

39. Anyone that “organizes protests inspired by extremist ideology”

42. Citizens that have “bumper stickers” that are patriotic or anti-U.N.

44. Those that are “fiercely nationalistic (as opposed to universal and international in orientation)”

46. Those that are “suspicious of centralized federal authority”

47. Those that are “reverent of individual liberty”

48. Those that “believe in conspiracy theories”

49. Those that have “a belief that one’s personal and/or national ‘way of life’ is under attack”

50. Those that possess “a belief in the need to be prepared for an attack either by participating in paramilitary preparations and training or survivalism”

51. Those that would “impose strict religious tenets or laws on society (fundamentalists)”

52. Those that would “insert religion into the political sphere”

53. Anyone that would “seek to politicize religion”

54. Those that have “supported political movements for autonomy”

55. Anyone that is “anti-abortion”

56. Anyone that is “anti-Catholic”

60. Those concerned about “illegal immigration”

61. Those that “believe in the right to bear arms”

62. Anyone that is engaged in “ammunition stockpiling”

63. Anyone that exhibits “fear of Communist regimes”

65. Those that are against illegal immigration

66. Those that talk about “the New World Order” in a “derogatory” manner

67. Those that have a negative view of the United Nations

68. Those that are opposed “to the collection of federal income taxes”

70. Those that display the Gadsden Flag (“Don’t Tread On Me”)

71. Those that believe in “end times” prophecies

When, and if, cities in the West are unable to deal with the Muslims who are invading, you can bet that this will be taken up a notch to impose just what I was mentioning upon the American people. However, we still have time to stop it and do our due diligence to prevent it from getting that far. Call or write your representative today and mention this article to them and have them put a stop to this right now.

Is there anyone in Congress standing up and putting a stop to this? If there is, I’m not hearing about them. If you know of someone who is, please post that in the comments section so we can make their voice heard.

The 14th Amendment Is Unconstitutional

Linderman Unleashed: Update on SB277, TPP & the Pope Says You’re Not a “Christian” If You Manufacture or Buy Firearms