TLB Editors note: If you were a person of integrity, of good moral character and high intellect, would you be willing to say “yes I’ll serve” if you got a call today from the White House? Knowing full well the confirmation hearings will be a platform for Liberals to try and Demonize, Minimize and Demoralize you, your family, your supporters and the Trump administration… what would you answer be?

Did Neil Gorsuch tell students at the University of Colorado Law School that employers have to “protect themselves” against female employees, and that they should demand to know their family plans during the interview process? One student alleged those comments in a letter sent to the Senate Judiciary Committee, New York Magazine reported early this morning. However, Margaret Hartmann’s article neglects some important context — as do the quotes themselves.

Now some of his former students have raised concerns about Gorsuch’s views on discrimination against female workers. Jennifer Sisk, who graduated from the University of Colorado Law School last year, says that during a Legal Ethics and Professionalism class last spring, Gorsuch told his students that companies should ask women about their pregnancy plans during job interviews, and claimed that many women plan to manipulate their employers by taking maternity leave, then quitting to stay home with their children.

Sisk sent a two-page letter describing the incident to the Senate Committee on the Judiciary. It was posted on Sunday night by the National Employment Lawyers Association and the National Women’s Law Center. …

He told them that “all our hands should be raised because ‘many’ women use their companies for maternity benefits and then leave the company after the baby is born.” She says he “implied that women intentionally manipulate companies and plan to disadvantage their companies, starting from the first interview.”

When one student said employers can’t ask prospective hires about their pregnancy plans, Gorsuch said that was incorrect.

Jennifer Sisk isn’t just a former UC Law student, however. She also worked for Senator Mark Udall (D-CO) before his defeat by Cory Gardener in 2014, as Glenn Reynolds pointed out:

But the quoted “former student,” identified by New York Magazine as one “Jennifer Sisk, who graduated from the University of Colorado Law School last year,” is not just any former student, but a former operative for Democrat Mark Udall. (“Sisk went to college in Massachusetts, at Wellesley, then worked as an aide in Mark Udall’s Senate office in Washington.”) New York Magazine leaves that rather important fact out.

Yes, that does lend a little more context as to why this particular discussion came to mind now. NBC News then followed up with other students, who reported that the letter takes the discussion way out of context:

“Although Judge Gorsuch did discuss some of the topics mentioned in the letter, he did not do so in the manner described,” Will Hauptman wrote in the letter, which was sent on Sunday.

Hauptman wrote that Gorsuch often asked his students to consider the challenges they would face as new attorneys, including the tension between building a career and starting a family, especially for women.

“The seriousness with which the judge asked us to consider these realities reflected his desire to make us aware of them, not any animus against a career or group,” he wrote.

A response from the person aiding in the Gorsuch nomination process also said that Sisk’s claims were false and came from a misunderstanding of the hypothetical discussion question.

This has become part of the tradition in Senate confirmations generally, and in judicial confirmations in particular — finding any remark that can be twisted out of context into making a nominee look bigoted or biased. Perhaps that propensity in judicial nominations comes from the heavy reliance on colloquy using hypotheticals in legal education, but it also appears in other confirmations as well. It’s part of a disturbing trend since Robert Bork that requires presidential nominees to be as bland and opinionless as possible, rather than focus on achievement and perspective in a healthier manner. The unending “gotcha” games have turned the confirmation process into a character-assassination endurance arena that leaves everyone damaged in the end, not the least of which is the American public.

Amusingly, even Sisk offered an endorsement of Gorsuch (of sorts) at the time of his nomination: 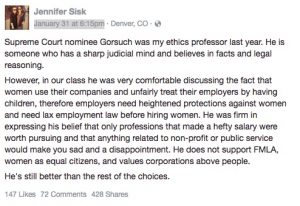 Politico reported today on the more substantive parts of Gorsuch’s record that they will highlight in an attempt to paint him as an extremist. That includes his questioning of the Chevron doctrine, as predicted, but also the Hobby Lobby case, which will shortly become moot with Tom Price at HHS anyway. They’ll try to paint him as a corporate shill and a merciless jurist in Hwang v Kansas State, a case which denied additional medical leave to an employee who later died from cancer, even though Gorsuch wrote the opinion for a unanimous decision that included two appointees of Bill Clinton. Finally, they will focus on his pre-bench career in the Bush administration’s Department of Justice, where he helped defend the use of the detention center at Guantanamo Bay — a facility that remains popular with the American public, so good luck scoring points with that.

At least those could be valuable discussions about important public matters, even if the current environment of confirmations highly discourages open exchanges on such topics. It beats twisting classroom hypotheticals into pretzels for obviously partisan cheap-shot points.

TLB gratitude to writer Ed Morrissey and HotAir.com for this pertinent perspective. 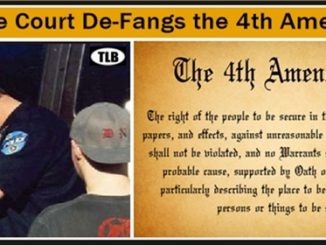 Supreme Court: Illegally Obtained Evidence May Be Used Against You