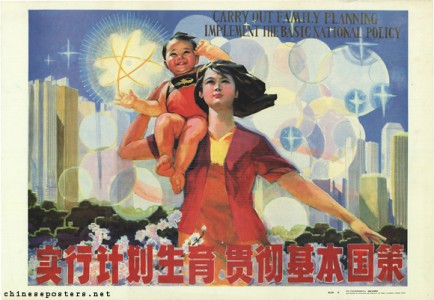 (The Real Agenda) China is the role model to follow for global depopulation. Other countries follow with covert programs but no nation has been so clear about its hatred for humanity than the Asian giant.

It seems that forced depopulation measures such as mandating how many children a woman is allowed to give birth to have proven to be a big mistake.

The Chinese people are rapidly aging and China is now considering easing policies such as forced detention and abortions when mothers get pregnant with their second child.

Given the rapid aging of the Chinese population, Beijing is weighing the idea to allow couples to have a second child, while burying one of the most controversial laws in the country.

It is estimated that China has avoided the birth of at least 400 million births and now the Chinese are bearing the consequences.

Experts coincide in pointing out that it is a matter of time for China to end its suppression of couples’ desire to have a second child.

The local newspaper China Business News, cites sources from the Chinese National Commission for Health and Family Planning, whose representatives say that the change in the number of children that a family may have will come as soon as the end of 2015.

The agency, which did not respond to questions from CBN, denied however that a timetable has been established to allow a second child to all couples.

“It should have been changed long ago. Each year that the government delays the change in policy is another year that women lose to conceive a baby,” argues demographer He Yafu.

The one-child law was officially launched under Deng Xiaoping in an alleged attempt to mitigate the social, economic and environmental problems of overcrowding in the country. In doing so, China became the model for other countries to follow in the elite’s attempt to depopulate the planet due to alleged concerns regarding the scarcity of natural resources and how these resources would not keep up with global birth rates.

Only in 2015, the American Congress guaranteed $35 million to the UN Population Fund, the organization responsible for overseeing horrific population control measures around the world.

Countless members of the global elite have manifested their desire to kill most of the planet’s population and have been doing so for decades. Unlike China, these measures have been applied in secret and with the collaboration of elected governments.

But implementation has been controversial both the deprivation of the right of parents to decide freely the number of children they want to raise, and the numerous allegations of forced abortions and sterilizations.

The direct and only visible legacy of the law is an increasingly aging population that threatens the sustainability of the already fragile social security system in China and a concept of families having few children.

According to the latest outlook report by the UN, 16.8% of the Chinese population is 60 years or older.

“The aging population is a major threat to the social security system. Once you have a large proportion of people that is not working, the pressure increases on pensions, health system and available resources to care for the elderly … The Chinese government is aware of this, but it has to perform more proactive policies,” argues Elena Glinskaya, Social Protection Specialist at the World Bank in China.

Ms. Glinskaya herself points out the failure of the one child policy: A smaller population and an older population cause society to have less resources, not more, as depopulation advocates argue. Less people at work means less production, which in turn means less employment. This results in less people providing less resources to social security and healthcare systems.

Having less people employed means having more people dependent on government programs, such as healthcare and social security, which further enlarges the size of government. More government means more bureaucracy, more out of control spending, more corruption and a more dysfunctional society.

In an attempt to alleviate this pressure, Beijing decided to partially relax the one-child policy in late 2013. The government allowed spouses who came from families with one single child to have a second one. Now, just one of the spouses needs to be from a family that had only one child.

But the move adopted in 2013 has not brought the expected baby boom: of the 11 million couples who meet this new requirement, only a million and a half have asked for permission. Experts fear that the country remains stuck in a low fertility rate permanently:

“The attitude of the public has changed. They became accustomed to this type of family. Even new policies that encourage new births might not be enough,” said He.

In a report published earlier this year, the Chinese Academy of Social Sciences urged the authorities to adopt a “more aggressive” policy after finding that the fertility rate in the country is 1.4 children per woman.

It is a figure that is dangerously close to 1.3, a threshold that countries that have achieved have not managed to make up despite many incentives.

Luis R. Miranda is an award-winning journalist and the founder and editor-in-chief at The Real Agenda. His career spans over 18 years and almost every form of news media. His articles include subjects such as environmentalism, Agenda 21, climate change, geopolitics, globalisation, health, vaccines, food safety, corporate control of governments, immigration and banking cartels, among others. Luis has worked as a news reporter, on-air personality for Live and Live-to-tape news programs. He has also worked as a script writer, producer and co-producer on broadcast news. Read more about Luis.

More Lies from “Our” Government: The Latest Jobs Report