In keeping with President Trump’s demands… 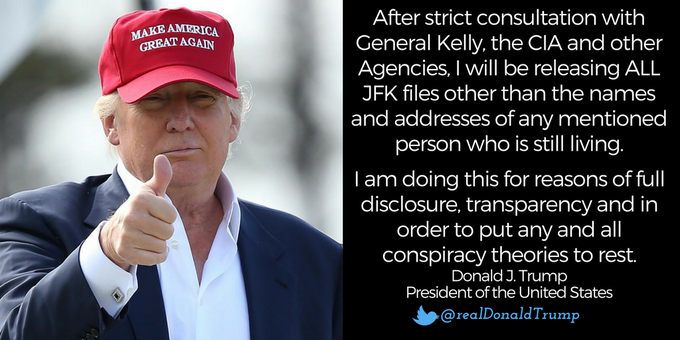 The documents can be found here.

As CBS reports, this latest batch of 676 records could yield more interesting results than last week’s release, as they are the ones intelligence agencies requested more time to review, citing national security concerns.

The majority of records from Friday’s batch – 553 of them – are from the Central Intelligence Agency (CIA). Those records were previously denied in their entirety, according to NARA.

CBS points out some interesting findings… 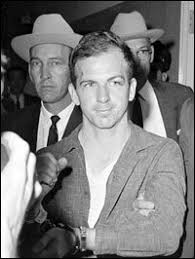 On Sept. 27, 1963, Lee Harvey Oswald [Pictured here] called the Soviet embassy in search of a visa to visit Odessa, according to the files. Eventually, the Soviet Embassy says they have received no answer from Washington, and such a request will take four to five months. Oswald says he belongs to a pro-Cuban organization and can’t get a Cuban visa without first getting a Russian visa. The next day, Sept. 28, 1963, Oswald calls the Soviet embassy to ask for news from Washington.

The Pentagon received a letter from a Betty Joe Dodge of Lubbock, Texas, in September 1978. The letter, addressed to General Westmoreland, noted that an ex-Green Baret named Robert H. Doty had stayed in Dodge’s home that summer while he worked as a roofer. On the evening the assassination news was reported, he seemed uneasy, Dodge said. When Dodge asked what difference it made, Doty told her, “I’m the man.”

“I was afraid to ask any questions,” Dodge wrote. “I could never tell whether he was testing my reaction to a wild statement or actually telling me the truth.”

Officials thought Oswald was “odd” in 1960

One U.S. official, Thomas B. Casasin, recalls that he thought Oswald’s behavior struck him as “odd” and “unusual” after reading a dispatch on him following Oswald’s return to the United States from the USSR. The official told his subordinates something along the lines of, “Don’t push too hard to get the information we need, because this individual looks odd.” The official remembers being particularly interested in what Oswald could provide on the Minsk factory where he had been employed.

However, perhaps the most interesting document released was a March 12th, 1968 FBI analysis of Martin Luther King Jr – just 3 weeks before he was assassinated – portraying the civil rights leader in a negative light.

The 20-page document released on Friday attempts to tie the civil rights leader to various communist influences and alleges financial improprieties at the Southern Christian Leadership Conference, the African-American civil rights organisation founded by King, reports CNN. The document also contains insinuations and assertions about King’s personal life, including extramarital affairs and other sexual improprieties. However, it was not clear whether the authors of the document verified any of the information.

One of the sections in the document in the section titled “King’s Personal Conduct” mentioned alleged affairs, which were alluded to in the 2014 film “Selma” and an infamous letter from the FBI urging King to commit suicide. The document repeatedly referred to some the alleged sex acts King engaged in as “unnatural” and “abnormal.”

One of the events mentioned in the document are workshops King held in Miami, Florida, in February 1968 with funds from the Ford Foundation to train black ministers in leadership.

“One room had a large table in it which was filled with whiskey. The two Negro prostitutes were paid $50.00 to put on a sex show for the entertainment of the guests. A variety of sex acts deviating from the normal were observed.”

The document continued to say that such occurrences were well known by King’s acquaintances.

“As early as January, 1964, King engaged in another, two-day drunken sex orgy in Washington, D.C. Many of those present engaged in sexual acts, natural as well as unnatural, for the entertainment of onlookers. When one of the females shied away from engaging in an unnatural act, King and other of the males present discussed how she was to be taught and initiated in this respect,” the document reads. “Throughout the ensuing years and until this date King has continued to carry on his sexual aberrations secretly while holding himself out to the public view as a moral leader of religious conviction.”

According to the document, King had a frequent affair with a woman, which may have led to a baby girl being born. The FBI said the sources of the information was “a prominent Negro who is related by law to King’s mistress,” who referred to King repeatedly as a “hypocrite.”

“It was learned in February, 1968, from a very responsible Los Angeles individual in a position to know, that King has been having an illicit love affair with the wife of a prominent Negro dentist in Los Angeles, California, since 1962. He believes King fathered a baby girl born to this woman inasmuch as her husband is allegedly sterile,” the document reads.

“The child resembles King to a great degree and King contributes to the support of this child. He calls this woman every Wednesday and frequently meets her in various cities throughout the country.” According to the document, the source also said that King had affairs with three other women, including Joan Baez, a folk singer.

The King document was reviewed by the National Archives and Records Administration’s JFK Task Force in 1994 and marked with an “x” for “total denial” of its release. The options “release in full” and “release in part” were left blank on the cover page.

As CNN reports, The FBI analysis questions whether King should have been awarded the Nobel Peace Prize in 1964. It concludes:

“These facts about the Nobel Peace Prize winner make his remarks seem incongruous when he replied after winning this cherished award, ‘History has thrust me into this position. It would be both immoral and a sign of ingratitude if I did not face my moral responsibility to do what I can in the civil rights struggle.'”

In another section, the FBI document labels the Southern Christian Leadership Conference “a tax dodge”. It also alleges that many of King’s associates had communist ties, CNN reported. 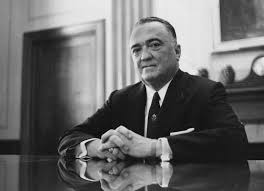 The document was authored while the FBI was led by Director J. Edgar Hoover [pictured here], who had investigators trail King and spy on him.

Hoover had authorised an extensive surveillance programme on King in the 1960s.

In 1964, a package containing tapes and a letter to King was delivered to his house and opened by his wife, Coretta Scott King. The letter appeared to urge King to commit suicide. It included the line: “There is only one thing left for you to do. You know what it is. You have just 34 days.” A Senate committee later confirmed the anonymous package had been sent by the FBI.

So 50 years ago The FBI was writing ‘analysis’ that included questioning an anti-establishment leader’s sexual behavior, business taxes, morals, ethics, and communist/Russian ties – not much changes does it!?

With our thanks to Tyler Durden, TLB published this story from ZeroHedge.