Talking heads, Democratic politicians and other opponents of President Trump flew into an apoplectic rage Monday morning as President Trump and President Putin answered questions from reporters about their joint summit in Helsinki. The historic meeting contained more than a few controversial revelations, and the media is apparently fixating on Putin’s admission that he wanted Trump to win in 2016, as both Trump and Putin denied that Russia had meddled in the race or had colluded, as well as Trump’s unwillingness to publicly condemn Russian interference.

As Trump declared the Cold War (and the more-recent tensions between the US and Putin’s regime) “a thing of the past,” Putin admitted that he wanted Trump to win “because he talked about bringing US-Russia relations back to normal.” 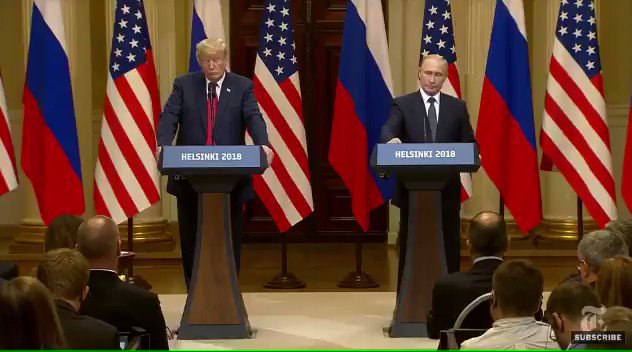 Here’s the moment when Putin was asked if he wanted Trump to win the 2016 election. Putin answered, “Yes.”

Asked point-blank if he had collected “compromising material” on President Trump when Trump traveled to Moscow for the Miss Universe pageant in 2013, Putin said he wasn’t even aware of Trump’s visit at the time, and that there were hundreds of American business luminaries in town at the same time. Collecting information on all of them would have been impossible, Putin said. Trump added that if Russia did have the long-rumored kompromat, “it would have been out long ago.”

Both Trump and Putin insisted that there was no collusion between Russia and the US, and that the Mueller probe is – as Trump has repeatedly described it – a witch hunt that has gone far beyond the original focus of what happened during the campaign.

“There was no collusion,” Trump said at joint presser with Russian Pres. Putin. “I didn’t know the president. There was nobody to collude with.”

“We ran a brilliant campaign and that’s why I’m president.”

Trump said that Putin convincingly denied interfering in the US election, a message that Trump said he felt was “best delivered in person.” Asked by a reporter if he would denounce Putin for interfering with the 2016 election, Trump refused and instead asked questions about the DNC’s failure to grant access to its compromised server to the FBI.

“30,000 emails gone – just gone. I don’t think in Russia they’d be gone so easily. Putin was extremely strong and powerful in his denial today. He offered to have people working on the case come and work with their people.”

Putin later added that Russia has never, and will never, interfere in US affairs, and that Russia is “willing to analyze” any evidence to the contrary.

“I had to reiterate things I said several times, including during our personal contacts, that the Russian state has never interfered and is not going to interfere into internal American affairs including election process,” Putin said. “Any specific material, if such things arise, we are willing to analyze together.”

But Putin did have an interesting proposal to heal US-Russia relations: An “expert council” meant to oversee an improvement in relations. Putin also suggested that he would allow Special Counsel Robert Mueller to observe interviews of the 12 recently indicted Russian intelligence officers if the US would allow Russian authorities to interview Bill Browder, a political opponent of Putin’s who has been effectively exiled from Russia. Putin said he suspects that US intelligence officials may have been involved in channeling $400 million from Browder to Clinton’s campaign.

“Business associates of Browder…they made $1.5 billion in Russia but never paid any taxes…they gave money to Hillary Clinton’s campaign. We have reason to believe that some intelligence officers guided these transactions. And we would have an interest in interviewing them.”

The Wall Street Journal called out Putin for avoiding discussion of allegations that Russia had violated a 1987 arms treaty by deploying what the US has described as “an illegal cruise missile”. Putin said the Kremlin has submitted a diplomatic paper to the US with some of its arms-control proposals. Putin also laid out an agenda for future discussions that will include the possible extension of the New START treaty, which is set to expire in 2021.

Pundits bashed Trump for treating Putin amicably during the press conference, with CNN’s Anderson Cooper describing the conference as “disgraceful.”

“You have been watching perhaps one of the most disgraceful performances by an American president at a summit in front of a Russian leader certainly than I’ve ever seen.”

As for the break down in US-Russia relations,Trump said there were issues on both sides.

“I hold both countries responsible. I think the United States has been foolish… I think we’ve all been foolish. We’re all to blame.”

Democratic Congressman Adam Schiff said Trump’s permissiveness “gave Putin the green light to interfere again” while Senate Minority Leader Chuck Schumer said Trump siding with Putin was “dangerous” and “weak.” Even some Republicans appeared uncomfortable with the amiable relations between Trump and Putin, with Paul Ryan saying “there is no moral equivalence between US and Russia” and that “US must be focused on holding Russia accountable.”

[There was drama just before the start of the Press Conference…]

The drama began before Putin and Trump arrived at their podiums, as a US journalist covering the event for left-wing magazine “the Nation” was forcibly removed by Russian security after presenting a sign that read “Nuclear Weapons Ban Treaty” – something the Russians found to be a “malicious object.”

<>The reporter, whose name is Sam Husseini, is also the communications director for DC nonprofit the Institute of Public Accuracy.

(TLB) published this story from ZeroHedge, with our thanks to Tyler Durden for the coverage.