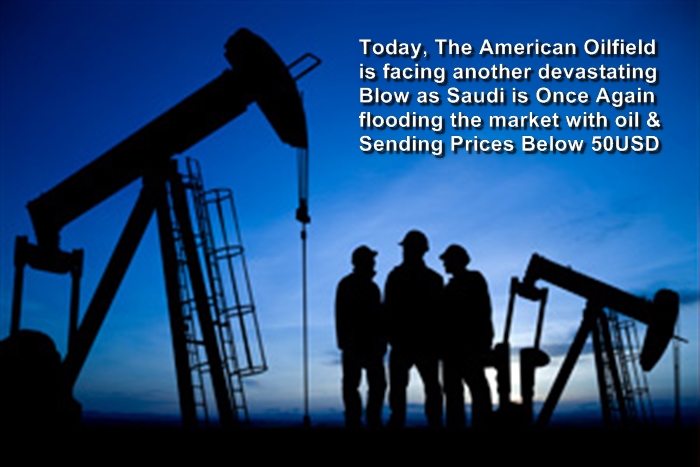 The year 1983 is still remembered here in Louisiana. It was the year that Saudi opened the oil valves of OPEC, flooding the world with cheap oil. Our President Reagan used that well-orchestrated opportunity to send the USSR economy into a tailspin, who struggled with totalitarian communism that ended in a total collective default. In the middle of their own Vietnam in Afghanistan, trying to secure a pipeline there, and up to their necks in debt trying to keep up in an escalating cold war, the combination was lethal… and as they collectively defaulted on their dept to our Western Banks, their country, along with a bound social system, disintegrated…

In the middle of that well-orchestrated process, our American Oilfields were devastated. Here in Lafayette, Louisiana, seven out of nine local banks went belly up, and it took six years to get back a little over 50 percent. With that year as a benchmark, we never have… And the dreams to become energy independent, also disintegrated…

The USSR, is not the Russia of today…

All of a sudden, seemingly out of the blue, but planned for decades, the banking cartels and the MIC, (military industrial complex), war corporations and bankers are now promoting another economic cold war with Russia, and OPEC/Saudi seems to be stepping up to again destroy Russia. Why, and how?

And ISIS, the perfect distraction, an enemy unheard of just a few months ago, is driving around in US Humvees and flashing brand new weapons seemingly made for our military, and the complexity and convoluted truth of this matter leaves the American Spirit fearful, and confused… But profits are escalating, and the military industrial complex gun-running is staying busy fighting another faceless enemy, supplying both sides…. And in the middle of this new Banker orchestration, Mr. Putin is warning them to release their strangle hold on his country with threats of another European War… And as the Russian Economy sinks, and the Ukraine just can’t make up its mind who to pay tribute to, opportunity is rifle… and as the Carpet Baggar laughs, another resounding milestone goes virtually unnoticed by the common people… that we are now well over 18 trillion in debt.

And some of us are tired of fear, and of being a sacrificial lamb for a One Word Government… we want our country back.

And the sword slashes …

Today, the American Oilfield is facing another devastating blow as Saudi is again flooding the market with oil, sending prices below 50US. Too cheep to drill, the layoffs in the oil-patch are beginning in earnest. Amazingly, we were posed for another boom by speculators just last year, not only to become energy independent, but with our new (so called) American technology in Fracking, we now have a 100 year surplus of that product. The transition from oil to gas promises to usher in a new age of clean and abundant fuel. It could be a long standing and viable economic boom for America, but the valves are open, and instead of managing the flow, they are attempting to destroy both America and Russia, for profit.

And the sword slashes…

This year, in 2015, for the first time in 45 years… where an LNG terminal in Alaska supply’s Japan with LNG, we will be exporting natural gas all around the world from a terminal that costs billions to build, right here in Louisiana. So amazingly viable, they are widening the Panama Canal to accommodate the new giant LNG transport ships, with unlimited financing from around the world, and have in-hand signed contracts that blue-lines that industry for years to come. A second project has recently been approved to build, and that will double the previous export opportunities of Cheniere Energy, the first one up and running this very year…

As it seems most everything in this world, especially when it is about power, control, and fear that oils that great war machine… the world is not the same as 1983. There are new names, new enemies, but the controlling power is the same… Similarly, we were just about to become energy independent again, here in America, and our previous suppliers, who have made trillions… do not want to see western dependence end. We must look closely at why we are being force-fed low-quality oil from Canada with the attempt to take up the slack, carving up our country with another pipeline? They want to send that oil to our own Cancer Ally to refine, because they have the pressure of environmentalist to contend with, same as those who do not want the pipeline here. Think about that for just a moment! Is it the environment, or is it some company’s bottom line? I’ll bet that it is a profit margin every time…And though it is promoted by media to be American oil, North America is not the United States of America. It is a ruse… When we say “Drill here. Drill now!” we are not talking about Canada, Mexico, or the dying Venezuela, but the United States of America. That sir, is energy independence… And as I am a Libertarian, I say, America First. Put America first. Drill in the United States of America!

OPEC/Saudi does not like Russia because they are considered competition, along with all BLOC countries. Just a few years ago the Jewish Communist Oligarch that had the country by the throat since the Bolshevik Revolution, was disbanded, and a new Capitalistic government has emerged from the ciaos of rogue power structures that some have called Mafia, and fortunately, however, out of the fray, both civil liberties and Christianity is on the rise, just as ours are dissolving. Orthodox Christianity, in Russia, is vying to become the national religion, and though Mr. Putin is reluctant to accept this ideology of Church State, he has come forward with a public statement that he considers himself a Christian. This has caused a national furor, a new love of country, where just sixty years ago all religions were dismantled or went underground. The horrors of the Bolshevik Revolution is still remembered, and they do not want that to return.

Indeed, OPEC/Saudi, the country where our new President bowed to their Murderous Oil Prince, has a great manipulative power over our Congress, and together with AIPAC, now controls our country from the inside out… Our Congress is the best money can buy, and it seems evident that they do not care one iota for our civil liberties, our economy, our constitution, our sovereignty, our natural God-given rights, and are bought and paid to promote their corporate sponsors. They are traitors… And they should be fired. Term limits would help, but only an informed populous could have any hope in achieving that lofty ideal… Individual responsibility seeks truth, and both are in short supply.

Author’s Note: Yesterday I picked up my new Christmas shotgun at my local shooting range. Parked in front I saw several State Police cars with one that had SUPERVISORprinted on the door in silver letters. On my way out I noticed him looking at some leather holsters, and with a spur-of-the-moment decision walked up to him, trying to project calmness… “Sir,” I said, “may I ask you a question?” I tried to smile.

“Sure.” he said, and he looked at me right in the eyes.

“Well, I know this is out of the blue, but I’d like to ask you if you are an Oath Keeper.”

His mind clicked, and I could see the wheels turning…”Yes, yes I am sir, and why do you ask?”

I could feel the blood moving to my face, with a lump in my throat too, just like the thirty other times I have done this…“Well, you took an oath to protect the Constitution of the United States of America from all enemies both domestic and foreign.” I said, “Do you read the Constitution?”

“Yes I do read the Constitution, and yes I take my oath very seriously.”

I put my hand out to him, and he took it with a strong grip, and I said “Thank you for your service…” And for just a moment more we held eye contact, and what I saw there gave me hope, and a love too, for my country and this fine young man who is on the front lines. And as I turned and walked out, I heard him say:

What May 2018 Has in Store: It’s Difficult to Understate the Dangers

Kerry Pins Israel’s Netanyahu to the Mat on International TV 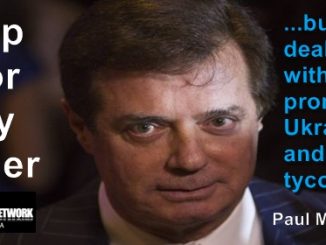