Just this September, seven species of bees were added to the endangered species list. The bees live primarily in Hawaii, the same state that has seen an increase of health issues in humans related to the mass use of pesticides created by Monsanto and others (Hawaiian agricultural workers have seen increased rates of cancers, Parkinson’s Disease and depression) 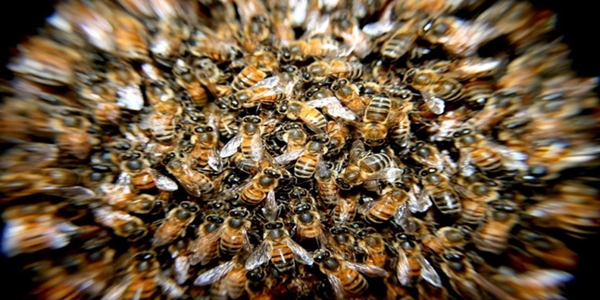 If people are this affected by these pesticides, what effect can it have on a small body of a bee?

While the official statement is that these bees are disappearing due to natural causes, we have seen the catastrophic results of how chemicals can seriously damage and even destroy bee colonies.

Just this August millions of bees dropped dead after one night of aerial spraying of a chemical to fight Zika mosquitoes in South Carolina. And a recent long-term study linked one particular type of pesticide coating on seeds to ongoing wild bee declines.

With so much evidence of these and other chemicals harming the bees, it should be common knowledge that pesticide companies and their toxic products are harming the bees.

Despite that, at least two of the biggest companies in the world have been covering up evidence of harm for years. And now, they’ve officially been caught.

It has been revealed that Bayer (who just merged with Monsanto) and Syngenta, by one recent measure the world’s top two pesticide companies, have been lying to regulators and the general public, repeatedly denying that their pesticides harm bees while rejecting or hiding research that showed otherwise.

As Syngenta’s former CEO John Atkin once put it according to the New York Times: “…These pesticides do not damage the health of bees.” 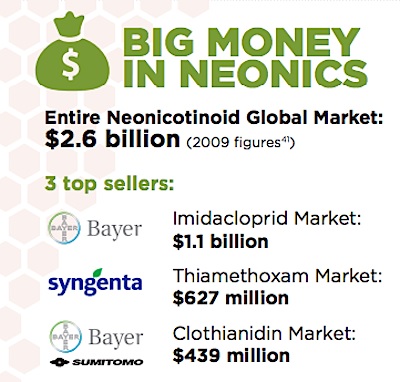 Source: The University of Vermont. Are the two giants lying to save their bottom line?

In reality, studies from both companies reveal that their pesticides are capable of doing serious damage to the honeybees after all. This research was left unpublished and purposefully hidden from the general public, as fate would have it. Greenpeace obtained the secret documents through the Freedom of Information Act, reported The Guardian.

The pesticides in question are neonicotinoid insecticides (Bayer’s clothianidin and Syngenta’s thiamethoxam), the most commonly used insecticides. They were banned in the EU in 2013 for use on flowering crops, but are widely used otherwise, especially in the United States.

Most importantly, these chemicals harm wild bees, which Bayer and Syngenta’s (read: industry-funded) studies do not take into account.

The aforementioned long-term (18-year) study above also showed that these types of pesticides (of the neonicotinoid class) can cause bee declines ranging from 20-30 percent among wild populations.

In the case of Bayer and Syngenta’s own unpublished studies, it was shown that their pesticides are in fact capable of harming bees according to the Greenpeace investigation. As The Guardian wrote:

“The newly revealed studies show Syngenta’s thiamethoxam and Bayer’s clothianidin seriously harmed colonies at high doses, but did not find significant effects below concentrations of 50 parts per billion (ppb) and 40ppb respectively. Such levels can sometimes be found in fields but concentrations are usually below 10ppb.”

Syngenta had told Greenpeace in August that “none of the studies Syngenta has undertaken or commissioned for use by regulatory agencies have shown damages to the health of bee colonies,” according to Prof. Dave Goulson of the University of Sussex.  “That clearly contradicts their own study.”

Considering that these are industry-funded studies by two companies desperate to protect what amounts to nearly $2 billion in business (as of 2009) between them (see the above chart), the impact of these pesticides could be much worse than the studies show, critics say. But the full studies are still not being made public because of commercial confidentiality rules.

Ben Stewart of Greenpeace is now calling on Bayer and Syngenta to reveal the whole truth about pesticides and the harm they cause.

“If Bayer and Syngenta cared about the future of our pollinators, they would have made the findings public. Instead, they kept quiet about them for months and carried on downplaying nearly every study that questioned the safety of their products. It’s time for these companies to come clean about what they really know.”

Goulson is equally frustrated with the secrecy. The companies have previously criticized the type of study (using sucrose and neonicotinoids in the field) used to determine toxicity to bees. And yet their own studies have used a similar methodology.

“Given all the debate about this subject, it is hard to see why the companies don’t make these kinds of studies available,” he said. “It does seem a little shady to do this kind of field study – the very studies the companies say are the most important ones – and then not tell people what they find.”

“America’s bees are dying at some of the highest rates ever, struggling to survive a deluge of toxic neonic pesticides unleashed by multinational chemical giants like Bayer and Monsanto. Yet the EPA continues to drag its feet on protecting these vital pollinators. And bees can’t afford to wait for the next administration.” read one petition from the Natural Resources Defense Council to President Barack Obama to ban these pesticides (view and sign here).

Another petition asking the EPA to ban neonics just as the European Union did can be found by clicking here.

Other works by Yelena Sukhoterina 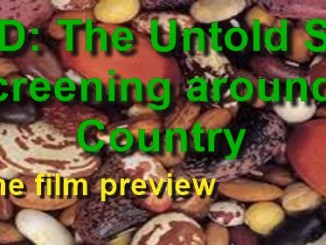 SEED: The Untold Story is Screening around the Country