In January 2017 email to intel chief coughed up under court order, the former FBI director contradicted sworn avowal to FISA court that Steele dossier was verified.

“We are not able to sufficiently corroborate the reporting,” Comey wrote in a Jan. 12, 2017 email to then-Director of National Intelligence James Clapper that was declassified and made public through an open records lawsuit by the Southeastern Legal Foundation.

The memo recounts an internal debate inside the U.S. intelligence community during one of the most delicate moments in the FBI’s then six-month old Crossfire Hurricane probe.

CIA officials had already informed Comey’s FBI that the target of the FISA warrant, Carter Page, wasn’t a Russian spy but rather an asset helping U.S. intelligence. The bureau had received warnings about Steele and the reliability of his source network, including that it might have been compromised by Russian disinformation. Agents had also just recommended on Jan. 4, 2017 shutting down the probe’s inquiry into incoming National Security Adviser Michael Flynn for lack of evidence.

The FBI had been warned the previous summer that Hillary Clinton’s campaign may have planted the false Russia collusion story as a way to “vilify” Trump and distract from her email scandal, and agents were about to interview Steele’s primary sub-source, who would discount much of the information in the dossier attributed to him as bar talk and unconfirmed rumor not worthy of official intelligence.

And the larger intelligence community had decided it did not want to vouch for the Steele dossier in its official Intelligence Community Assessment about Russian meddling in the 2016 U.S. election.

It was in that environment in the final days of the Obama administration that Clapper had written Comey earlier on Jan. 12, 2017 to inform the FBI that Clapper had decided to release a public statement declaring that the Steele dossier was only mentioned in an appendix to the intel community’s report because the “IC has not made any judgment that the information in the document is reliable.” 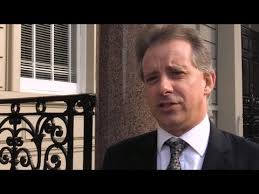 Comey tried to push back, suggesting Steele was deemed reliable (he actually had been terminated by the FBI for leaking by that time) and that his network included sources that might be in a position to know things (although the key source had already disavowed the information attributed to the dossier). (Steel/YouTube)

“I just had a chance to review the proposed talking points on this for today,” Comey wrote Clapper. “Perhaps it is a nit, but I worry that it may not be best to say ‘the IC has not made any judgment that the information in the document is reliable.’ I say that because we HAVE concluded that the source is reliable and has a track record with us of reporting reliable information; we have some visibility into his source network, some of which we have determined to be sub-sources in a position to report on such things; and much of what he reports in the current document is consistent with and corroborative of other reporting included in the body of the main IC report.

Then Comey added the line that undercut his argument: “That said, we are not able to sufficiently corroborate the reporting to include it in the body of the report.”

You can read the full memo here:

The email exchange does not reflect whether Clapper responded again.

A report by Justice Department Inspector General Michael Horowitz that sharply criticized Comey’s FBI for misconduct in the Russia probe — including falsifying a document and submitting erroneous information to the courts — revealed that the very same day as the Clapper exchange Comey signed the first application to renew a Foreign Intelligence Surveillance Act warrant, thus extending the spying on Page for another three months. The IG concluded the Jan. 12, 2017 application contained erroneous information.

The Jan. 12, 2017 application signed by Comey was marked “verified,” representing to the FISA court that allegations from Steele’s dossier that Page had met two sanctioned Russians in summer 2016 and had tried to change the GOP platform to help Moscow had been substantiated. In fact, they had not been verified. To the contrary, the FBI had intercepted Page talking to an informant denying he had met the Russians or been involved in the platform change, two facts the FBI hid from the court.

“After a multiyear court battle led by Southeastern Legal Foundation, this memo proves what we already suspected — those at the highest levels of our government misled and lied to the court to get permission to spy on the Trump campaign, plain and simple,” attorney Kimberly Hermann told Just the News.

Comey’s response to Clapper suggests he was either unfamiliar with key revelations his agents had made or trying to gloss them. For instance, Comey claimed Steele was “reliable.” In fact, the FBI had terminated Steele two months earlier for violating the terms of his confidential informant agreement by leaking to the news media. The FBI had also had been warned by the CIA since 2015 that Steele was susceptible to Russian disinformation because he was too involved with oligarchs.

And the FBI had interviewed in November 2016 one of Steele’s former MI6 bosses, who warned agents that Steele had overstated his seniority during the time he served in British intelligence. “Steele’s former employer told the FBI in November 2016 after the first application was filed that Steele had served in a ‘moderately senior’ position and not a ‘high-ranking position’ as Steele had suggested,” one memo from the probe shows.

Likewise, Comey argued to Clapper that the FBI had some visibility into Steele’s network of sources and those sources were in a position to possibly know information. In fact, the FBI had by that time received multiple warnings from CIA that Steele’s network was likely compromised.

For instance, in early October 2016, before the first FISA warrant was secured, the FBI team leading the Russia investigation codenamed Crossfire Hurricane was told that one source used by Steele and known as Person 1 was tied to Russian intelligence — yet failed to disclose this to the FISA court.

“According to a document circulated among Crossfire Hurricane team members and supervisors in early October 2016, Person 1 had historical contact with persons and entities suspected of being linked to RIS,” the acronym for Russian Intelligence Services, one footnote in the Horowitz report revealed. “The document described reporting [redacted] that Person 1 was rumored to be a former KBG/SVR officer.”

The FBI also failed to disclose to the FISA judge that the source known as Person 1 was under a separate counterintelligence investigation by the FBI, the IG report footnotes show.

In fact on Jan. 12, 2017, the very day Comey signed the FISA and engaged with Clapper, the FBI had received clear warnings in a report that some of Steele’s dossier information about Trump lawyer Michael Cohen was “part of a Russian disinformation campaign to denigrate U.S. foreign relations,” according to another declassified footnote from the IG report.

In other words, Comey’s representations to Clapper and sworn avowals of verification to the FISA court had already been directly undercut by his bureau’s own evidence.

FBI’s desperate pretext to keep spying on Carter Page: He might write a book!

After Attending a Trump Rally, I Realized Democrats Are Not Ready For 2020

The Dopes At Snopes Just ‘Fact-Checked’ A Parody Site … Again

SESSIONS HIDING DNC SERVER EVIDENCE FROM PUBLIC UNTIL AFTER MIDTERMS