Tlaib Says She Feels ‘More Palestinian In Congress’ Than American

With Rep. Ilhan Omar and Rep. Rashida Tlaib the Muslim takeover of Congress is in high gear and Tlaib made that known in recent statements.

The halls of Congress are where many Americans feel more American due to the weight of their decisions affecting every citizen.

But for Rep. Tlaib it does not do that. For her, being in Congress makes her feel more Palestinian than American.

“But I’m more Palestinian in the halls of Congress than I am anywhere in the country, in the world…” she said at the Michigan Coalition for Human Rights on Sunday.

“You know myself, Ilhan [Omar], and all of us, we watch that people are policing what we say,” she told the crowd.

“Honestly, I never felt more Palestinian than I ever felt in Congress. Even in Palestine when I’m visiting my grandmom I’m more American,” she said.

“But I’m more Palestinian in the halls of Congress than I am anywhere in the country, in the world,” she said.

“And that just tells you, just the fact that they weren’t ready for us, they really weren’t. But we were ready for this,” she said.

“But I’m more Palestinian in the halls of Congress than I am anywhere in the country, in the world…” ⁦@RashidaTlaib⁩

The enemy is within, yet we’re scolded for calling it out. https://t.co/yQCcSoOAKa

Shouldn’t those who SERVE our American government only feel American?

Fn messed up. Needs to be fixed ASAP. Trump 2020 is definitely a step in the right direction !!!!

Odd how they suggested ‘dual allegiance’ is problematic.

“I’m more Palestinian in the halls of Congress than I am anywhere in the country, in the world…” –@RashidaTlaib

With Rep. Ilhan Omar and Rep. Rashida Tlaib the Muslim takeover of Congress is in high gear and Tlaib made that known in recent statements. 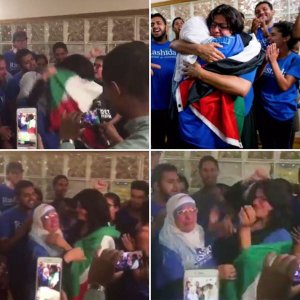 She was VERY PALESTINIAN on election night- I heard celebratory tongue trilling! Just like in their streets on 9/11. No tongue trilling in the chamber, fyi! pic.twitter.com/H4Wv5vULpE

(TLB) published this article from The Federalist Papers with our appreciation for the coverage.

Related article from The Liberty Beacon

Other related articles from The Liberty Beacon