Check your pantry. Do you have any cereals, crackers, cookies, snack bars, soy milk or baby formula in there? How about anything with corn syrup or processed food made from corn on your shelves? If so, you are probably eating food containing genetically modified organisms (GMOs).

GMOs are plant or meat products that have had their DNA altered in a laboratory by genes from other plants, animals, viruses or bacteria.  For example, genetically modified corn contain a pesticide that cannot be washed off. Most GE food grown in the U.S. is “Roundup Ready,” meaning it can withstand spraying of Monsanto’s Roundup pesticide and live, while weeds around it die. (Well, that’s how it works initially; now resistant “superweeds” have increased the amount of pesticides farmers must spray on their GE crops.)

Research links GMOs to allergies, organ toxicity, and other health issues, though the U.S. Food and Drug Administration does not require safety testing for GMOs.

Market watchers estimate that upwards of 70 percent of processed foods in your local supermarket contain genetically modified ingredients. However, there’s no way to be sure of the percentage because no labels are required to inform consumers about the presence of GMOs in food. (That may change if California voters approve Prop 37, a measure that would require labeling on foods containing GMOs.)

The top three GMO crops grown in the U.S. are soy, corn and cotton, according to the U.S. Department of Agriculture (USDA). During the past 12 years, the percentage of acreage planted with GMO crops soared to over 80 percent for each of the top three. (See this graph at Mother Jones.)

2. Soy: 93 percent of soy is genetically modified. Soy is a staple of processed foods under various names including hydrogenated oils, lecithin, emulsifiers, tocopherol (a vitamin E supplement) and proteins.

3. Cottonseed: According to the USDA, 94 percent of cotton grown in the U.S. is genetically modified. Cottonseeds are culled from cotton, and then used for vegetable oil, margarine or shortening production, or frying foods, such as potato chips.

4. Alfalfa: Farmers feed alfalfa to dairy cows, the source of milk, butter, yogurt, meat and so much more. Alfalfa is the fourth largest crop grown in the U.S., behind corn, soybeans, and wheat (though there is no genetically engineered wheat on the market).

5. Papaya: 75 percent of the Hawaiian papaya crop is genetically modified to withstand the papaya ringspot virus.

6. Canola: About 90 percent of the U.S. canola crop is genetically modified. Canola oil is used in cooking, as well as biofuels. In North Dakota, genetically modified canola has been found growing far from any planted fields, raising questions about what will happen when “escaped” GE canola competes with wild plants.

7. Sugar Beets: More than half — 54 percent — of sugar sold in America comes from sugar beets. Genetically modified sugar beets account for 90 percent of the crop; however, that percentage is expected to increase after a USDA’s decision last year gave the green light to sugar beet planting before an environmental impact statement was completed.

The organization True Food Now has a list of foods currently being tested for genetic modification, as well as those foods that are approved but not yet sold in the U.S. For a full snapshot of the future GMO landscape, visit this link. 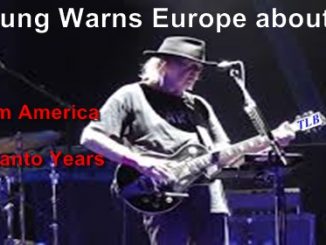 Neil Young: Say No to GMOs on ‘Behalf of All Living Things’

Vaccine Mania Leads to Modifying Humans for the NWO