TLB Editors note: For now we will go with what information is being pushed by MS Media and Official Government sources about Harvey. No doubt the anti-GeoEngineering community will have more than a few things to say about this event, knowing what has been disclosed about “Storm Steering” and “Weather Manipulation” over the last few years with the various programs that are in place.

Many are speculating that “Texas had to be spanked” for their “independent political views” and court decisions that went against the policies of the D.C. Establishment. Other observers in TLB‘s research staff say it is also doubling as a vehicle of misdirection so the Deep State can continue their control and choke hold on President Trump. Others taking advantage of this “weather circus” is George Soros and his ilk, as they prepare to raise Holy Hell in November across America.

One last thought about Texas. When the FEMA Director Brock Long says, “the aftermath of the storm would require FEMA’s involvement for years,” is a Red Flag that says “States Rights be Damned”…The Fed is in Charge. Is this step #1 to dissolve the Sovereignty of Texas? (TLB)

Shocking Drone Footage Shows Harvey’s “Unprecedented” Devastation, “No Parallel To Any Rainstorm In US History”

Based on the number of people affected, amount of water involved, and other factors, meteorologists have warned, there may be no parallel available to any other rainstorm in U.S. history as Mashable’s Andrew Freeman reports Tropical Storm Harvey has dropped more than 11 trillion gallons of water on Texas, triggering catastrophic, unprecedented flooding in the Houston area.

The rains have broken all-time records, exceeding the rainfall totals seen during Tropical Storm Allison in 2001… and it could be about to get a lot worse as forecasters are expecting the storm to turn back and drench what is left of Houston once again midweek.

According to Ryan Maue, a meteorologist at WeatherBell, a private forecasting firm, there is still up to 16 trillion gallons more rain likely to fall in the state, based on forecasts from the National Weather Service (NWS).

The Weather Service office in Houston reported just over 2 feet of rain in 24 hours between 7 a.m. Saturday and 7 a.m. Sunday morning, causing August to become the wettest month on record there. Forecast totals call for isolated rainfall amounts of up to 50 inches before Harvey finally releases its grip on the Lone Star state late this week. If this comes to fruition, it would be the greatest rainfall totals from a tropical storm or hurricane in U.S. history.

Maue estimates that a total of around 25 trillion gallons may be the final statewide rainfall total for Harvey, which is such a unique storm due to its slow-moving nature that the NWS has nearly run out of superlatives describing it.

Drone video shows the massive extent of the flooding…

Damage from Hurricane Harvey is expected to total tens of billions of dollars, with current estimates range from $20 billion to $40 billion, but an unusually large share of victims lacking adequate protection – only one in six have insurance.

“this event is unprecedented & all impacts are unknown & beyond anything experienced.”

With more rain to come, and rivers still rising to expected record-shattering crests early this week, the disaster continues to unfold. 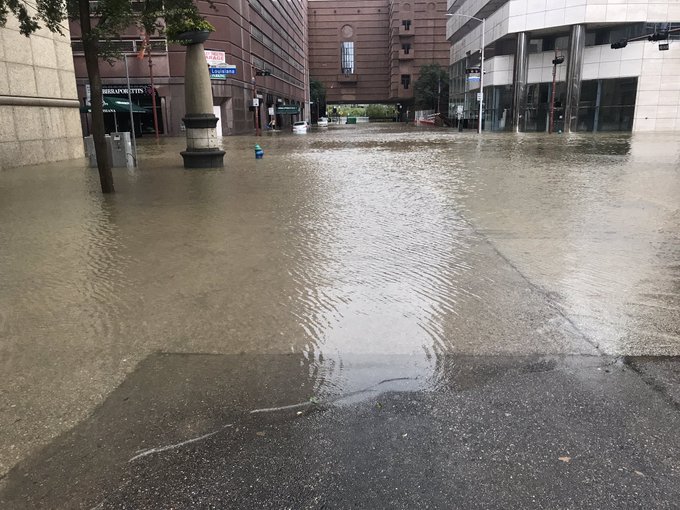 Here’s what to expect…(via Weather.com)

A tropical cyclone’s rainfall potential is a function of its forward speed, not its intensity. Therefore, several more days of torrential rain are expected in many of the already flood-ravaged areas.

And worst of all, weather experts are forecasting a second landfall. Harvey is set to make a second landfall, maybe as a hurricane, between Galveston and Beamont/Port Arthur, WeatherBell says in emailed report.

“The path farther to the east gives this a chance to become a hurricane again, though modeling is not doing that”

New ECMWF shows #Harvey moving back over the Gulf on Mon, restrengthening, then making a 2nd landfall near #Houston on Wed. Unthinkable.

The director of the Federal Emergency Management Agency, Brock Long, predicted that the aftermath of the storm would require FEMA’s involvement for years. “This disaster’s going to be a landmark event,” Long said.

TLB picked up this coverage from ZeroHedge (Text by Tyler Durden). Visit ZeroHedge for other pertinent articles.

Related story from The Liberty Beacon

Schiff: Public Has No Right To Observe Impeachment Inquiry… [Video]