UK Judge Rules Julian Assange Can’t Be Extradited To US

Assange could finally be free (for the first time since 2012) shortly ~(TLB) ed.

In a historic ruling that some say could help protect press freedoms in the US, a British judge has ruled that Wikileaks founder Julian Assange can’t be extradited to the US.

The New York Times described the ruling as “…a major victory against the U.S. authorities who have accused him of conspiring to hack government computers and violating the Espionage Act with the release of confidential communications in 2010 and 2011.”

Assange was dramatically arrested in April 2019 inside the Ecuadorian embassy in London following 7 years spent in hiding there as authorities pursued him on alleged sexual assault charges linked to his time in Sweden. While that investigation was dropped years ago (though Sweden formally reopened it following news that Assange was in custody before being dropped once again) it was revealed that his arrest in London was tied to an extradition request filed by the US. For years, prosecutors had been quietly pursuing their case against Assange.

The charges were soon revealed: the 49-year-old Assange is facing 17 counts of violating the Espionage Act for his role in publishing leaked military documents and cables. He was also charged with one count of violating the Computers Fraud and Abuse Act. All told, he could face 175 years in an American jail. Back in June, US prosecutors published an expanded indictment, which caused even more consternation for Assange’s defense team.

Though, now that a British judge has ruled that he can’t be extradited, it’s possible that he may never actually return to the US to face the charges against him. Though the Judge, Vanessa Baraitser (FaceBook picture) of the Westminster Magistrates’ Court, said she had no problems with the US case against Assange, she ruled that extradition would pose a serious threat to Assange’s health. Though she said the case appeared to be brought in “good faith”, and that Assange’s actions went beyond simply encouraging a journalist, the judge ruled extradition could have a seriously negative impact on Assange’s health. For example, she found “Mr. Assange’s risk of committing suicide, if an extradition order were to be made, to be substantial.”

Assange’s supporters and legal team have long warned about his deteriorating health in confinement, and photos of a sallow and decidedly unhealthy looking Assange have filtered out through the press. Back in 2019, the UN’s special rapporteur on torture and ill treatment declared that Assange’s confinement amounted to “psychological torture”. He is being held at Belmarsh, a high-security prison in London, where he has been awaiting the extradition ruling.

A crowd of supporters gathered outside the court for Monday’s ruling cheered the news.

Read the full 130-page indictment below:

And here’s the annex with expanded witness testimony:

The legal battle over Assange is nearing its one-decade mark (if one starts counting on the day he first sought refuge in the Ecuadorian Embassy). The cables and other embarrassing documents were leaked to Wikileaks and Assange by Chelsea Manning, who was convicted in 2013 in a military tribunal and sentenced to decades behind bars. She was imprisoned between 2010 and 2017, before her sentence was commuted by outgoing President Barack Obama.

To be sure, today’s ruling isn’t the last word. The US authorities now have 15 days to appeal the ruling, which is expected. Ultimately, in her ruling, the judge rejected the defense’s argument, and validated the points made by the prosecution, so if an appeal is filed, the court will likely explore whether the health concerns (risk of suicide), truly are as pressing as Judge Baraitser believes.

In a series of tweets on the ruling, Glenn Greenwald (Screen grab above) hailed the decision as “great news”, but pointed out that the judge still essentially validated the arguments being made by the US prosecutors. The judge instead ruled that the US prison system is too inhumane to justify extraditing anybody to face a potentially lengthy sentence in an American prison.

Greenwald also confirmed that Assange’s legal team intends to apply for bail, which means Assange could finally be free (for the first time since 2012) shortly.

The US DOJ has already said it intends to appeal. The question — and I’m hearing different things on this — is whether the courts will keep Assange imprisoned while that appeal is pending. The court ordered him released, but it’s unclear if the DOJ appeal will keep him in jail.

This wasn’t a victory for press freedom. Quite the contrary: the judge made clear she believed there are grounds to prosecute Assange in connection with the 2010 publication.

It was, instead, an indictment of the insanely oppressive US prison system for security “threats.”

Ultimately, though, from a humanitarian *and* a political perspective, what matters most is that Assange be freed as soon as possible. The US Govt doesn’t care what prison he’s in, or why: they just want him silenced and in a cage. He should be freed immediately.
Glenn Greenwald@ggreenwald

The full ruling is at the link. Savor the last, sweet paragraph. 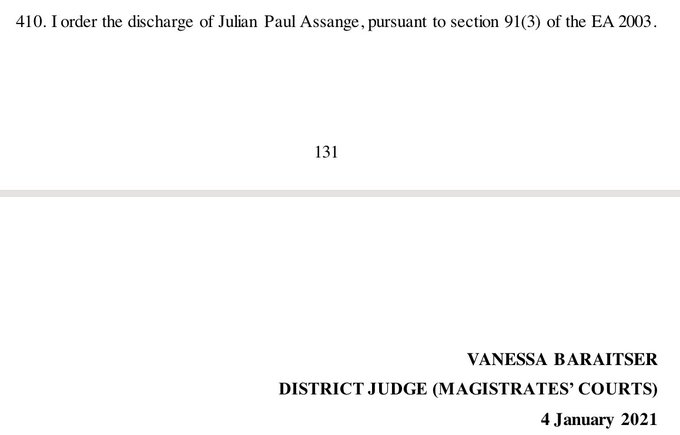 But an even bigger question now, with extradition seemingly off the table, will President Trump decide upon a last-minute pardon for Assange, as many of Assange’s supporters have pleaded with him to do.

The Results Are In: 89% Of Catalans Voted For Independence