(ZeroHedge) The Ukrainian prosecutor who Joe Biden bragged about getting fired, Viktor Shokin, has filed a criminal complaint in Kiev against the former Vice President for abusing his power, according to French news outlet Les Crises (confirmed by multiple sources according to PJ Media).

Shokin writes in his complaint:

During the period 2014-2016, the Prosecutor General’s Office of Ukraine was conducting a preliminary investigation into a series of serious crimes committed by the former Minister of Ecology of Ukraine Mykola Zlotchevsky and by the managers of the company “Burisma Holding Limited “(Cyprus), the board of directors of which included, among others, Hunter Biden, son of Joseph Biden, then vice-president of the United States of America.

The investigation into the above-mentioned crimes was carried out in strict accordance with Criminal Law and was under my personal control as the Prosecutor General of Ukraine.

Owing to my firm position on the above-mentioned cases regarding their prompt and objective investigation, which should have resulted in the arrest and the indictment of the guilty parties, Joseph Biden developed a firmly hostile attitude towards me which led him to express in private conversations with senior Ukrainian officials, as well as in his public speeches, a categorical request for my immediate dismissal from the post of Attorney General of Ukraine in exchange for the sum of US $ 1 billion in as a financial guarantee from the United States for the benefit of Ukraine.

Shokin says that due to “continued pressure from the Vice President of the United States Joseph Biden to oust me from the job by blackmailing the allocation of financial assistance, I, as the man who places the State interests above my personal interests, I agreed to abandon the post of Prosecutor General of Ukraine.”

In November, the State department released detailed accusations against the Bidens levied by Shokin and his successor, Yiury Lutsenko. In them, Shokin claims:

“He [Shokin] became involved in a case against Mr. Mykola Zlochevsky the former Minister of Ecology and Natural Resources of Ukraine. The case was opened as a result of Mr. Zlochevsky giving himself/company permits to drill for gas and oil in Ukraine. Mr. Zlochevsky is also the owner of Burisma Holdings.”

“Mr. Shokin stated that there are documents that list five (5) criminal cases in which Mr. Zlochevesky is listed, with the main case being for issuing illegal gas exploration permits. The following complaints are in the criminal case.

“Mr Shokin further stated that there were several Burisma board appointments were made in 2014 as follows:

“Mr. Shokin stated that these appointments were made by Mr. Slochevsky in order to protect himself.“ 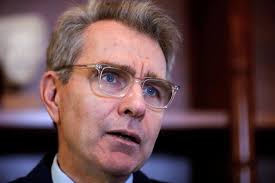 Shokin then details how in July 2015, “US Ambassador Geoffrey R. Pyatt (Pictured) told him that the investigation has to be handled with white gloves, which according to Mr. Shokin, that implied do nothing. On or about September 2015 Mr. Pyatt gave a speech in Odessa where he stated that the cases were not investigated correctly and that Mr. Shokin may be corrupt.”

“Mr. Shokin further stated that on February of 2016 warrants were placed on the accounts of multiple people in Ukraine. There were requests for information on Hunter Biden to which nothing was received.”

“It is believed that Hunter Biden receives a salary, commission plus one million dollars.”

“President of Ukraine Petro Poroshenko [who Joe Biden threatened to withhold $1 billion in US loan guarantees] told Mr. Shokin not to investigate Burisma as it was not in the interest of Joe and/or Hunter Biden. Mr. Shokin was called into Mr. Poroshenko’s office and told that the investigation into Burisma and the Managing Director where Hunter Biden is on the board, has caused Joe Biden to hold up one billion dollars in US aid to Ukraine.

(TLB) published this article from ZeroHedge as compiled and commented on by Tyler Durden with our thanks for the coverage.

Rudy Giuliani Can Barely Contain Himself Over His Ukraine Findings

The Devil You Say! [Commentary from Bill at The Butcher Shop]