The lies are usually about the most important policies and actions of the United States government regarding international relations — foreign policy matters such as wars, treaties, and economic sanctions. In the past, they were lies about matters such as that North Vietnam had attacked the USS Maddox in the Gulf of Tonkin Incident, and that Chile’s President Salvador Allende opposed democracy, and that Iraq’s President Saddam Hussein was «six months away from developing a [nuclear] weapon», and that Russian President Vladimir Putin’s «conquest of land» regarding Crimea had happened, and is the basic reason for the economic sanctions the US has placed against Russia.

(6) On January 6, 2017, an assessment of the United States intelligence community entitled, «Assessing Russian Activities and Intentions in Recent US Elections» stated, «Russian President Vladimir Putin ordered an influence campaign in 2016 aimed at the United States presidential election». The assessment warns that «Moscow will apply lessons learned from its Putin-ordered campaign aimed at the US Presidential election to future influence efforts worldwide, including against US allies and their election processes».

In other words: because of this alleged hacking of the 2016 US Presidential election, the sanctions that were originally (and entirely falsely) based upon «conquest of land» regarding Crimea, are now being greatly increased.

The 6 January 2017 document that the 98 Senators and 419 Representatives were relying upon there,  «Assessing Russian Activities and Intentions in Recent U.S. Elections», was signed by just one of the 17 U.S. intelligence agencies: President Obama’s Director of National Intelligence (James R. Clapper), who served at the pleasure of the then-President (Obama). The portion of it titled «Russia’s Influence Campaign Targeting the 2016 US Presidential Election» was additionally signed by the 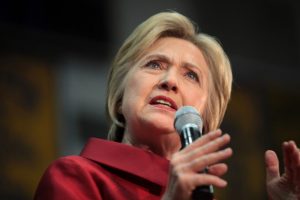 The US Intelligence Community (USIC) is confident that the Russian Government directed the recent compromises of e-mails from US persons and institutions, including from US political organizations. The recent disclosures of alleged hacked e-mails on sites like DCLeaks.com and WikiLeaks and by the Guccifer 2.0 online persona are consistent with the methods and motivations of Russian-directed efforts. These thefts and disclosures are intended to interfere with the US election process.

Two intelligence-offices are at Department of Homeland Security: Office of Intelligence and Analysis, and Coast Guard Intelligence.

Two are at Department of Justice: Office of National Security Intelligence, and FBI Intelligence Branch.

One is at Department of Energy: Office of Intelligence and Counterintelligence.

One is at Department of State: Bureau of Intelligence and Research.

One is at Treasury Department: Office of Terrorism and Financial Intelligence.

There are two entirely independent stand-alone intelligence offices: CIA, and Director of National Intelligence. Each of those two officials reports directly to the US President, not via a Cabinet Department.

However, if he expresses an opinion that contradicts the opinion of the sitting President, he may be fired by the President. None of his 16 Intelligence Community colleagues can do that — officially represent «the Intelligence Community» regardless of what its other 16 persons might privately support. The basic law that defines the DNI’s authority is Sec. 102. [50 U.S.C. § 3023], and states (on page 37) that he is at all times «Subject to the authority, direction, and control of the President». In other words, when the DNI speaks, the President of the United States is actually being expressed. Whether any other of the 17 top US intelligence officials is also being expressed is therefore irrelevant. The system was set up this way so that the President would officially have «the Intelligence Community» supporting whatever publicly endorsed «facts» or findings the President backs. Any dissenting members of that 17 simply don’t sign, that’s all. The purpose of this arrangement is to keep the findings — the public ‘facts’ — in line with the President’s policy on the given matter, no matter what.

Each of the 17 top intelligence officials has an official seal of office. No document that lacks the official seal of a particular one of these 17 offices is officially approved by that office. The lack of that person’s seal means one of two things: his agency was not consulted on the given matter, or else he had been consulted and declined to sign the given document or «findings».

Thus, only two of the 17 US intelligence agencies signed the «Joint Statement from the Department Of Homeland Security and Office of the Director of National Intelligence on Election Security».

On 19 October, 2016 occurred the last one of the three US Presidential debates between Hillary Clinton and Donald Trump; and Clinton said: «We have 17 intelligence agencies, civilian and military, who have all concluded that these espionage attacks, these cyberattacks, come from the highest levels of the Kremlin, and they are designed to influence our election». She was referring to that «Joint Statement from the Department Of Homeland Security and Office of the Director of National Intelligence on Election Security». That night, Politifact headlined «Hillary Clinton blames high-up Russians for WikiLeaks releases», and rated Clinton’s assertion there «True» because:

The October statement … said «The US Intelligence Community (USIC) is confident» in its assessment. As we noted in the article, the 17 separate agencies did not independently come to this conclusion, but as the head of the intelligence community, the Office of the Director of National Intelligence speaks on behalf of the group.

That’s not really true, but it is officially true: if the DNI signs to a «finding», then any dissenting member of the 17 must simply keep quiet, say nothing publicly about the matter. To Politifact, the refusal of the other top 15 US intelligence officials to sign the October 7th document meant nothing, and was irrelevant; the only signature that mattered to Politifact was the DNI’s (the signature of the person who, at all times, is in fact by law «Subject to the … control of the President» — which then was Obama) — even the DHS signature (which was on the document) meant nothing to Politi‘fact’. Politi‘fact’ didn’t say two signed it; but instead said that all 17 did — which was false. Politi‘fact’ too lies, in order to make the ‘facts’ fit the government’s policy.

Then, on 21 October 2016, USA Today headlined «Yes, 17 intelligence agencies really did say Russia was behind hacking»,  and wrote — in this ‘news’ report, this wasn’t published as an opinion-piece but ‘news’:

The fact-checking website Politifact says Hillary Clinton is correct when she says 17 federal intelligence agencies have concluded that Russia is behind the hacking.

«We have 17, 17 intelligence agencies, civilian and military who have all concluded that these espionage attacks, these cyber attacks, come from the highest levels of the Kremlin. And they are designed to influence our election. I find that deeply disturbing», Clinton said during Wednesday’s presidential debate in Las Vegas.

Trump pushed back, saying that Clinton and the United States had «no idea whether it is Russia, China or anybody else».

That ‘news’ report was influential: it had 45 thousand shares online. Its statement that the Department of Homeland Security was authorized to speak for any other intelligence agency than itself was entirely false. And the fundamental Russiagate narrative itself is almost certainly also a lie, which might help explain why Obama couldn’t get the other 15 US intelligence services (or at least the ones such as the CIA and NSA and FBI, which clearly possessed relevant intelligence about the matter), to attach their seals to it at the time.

Strong evidence exists that Craig Murray, a British friend of Julian Assange (both pictured), picked up from a Democratic National Committee insider on 24 September 2016 in Washington DC a thumb drive or other physical embodiment of the data that soon thereafter became leaked, and that he delivered it to the Wikileaks founder inside the Ecuadorean Embassy in London.

Furthermore, according to investigative journalist Seymour Hersh speaking on 1 August 2017, an earlier leak from a different DNC insider had produced the June 2016 DNC computer-data release by 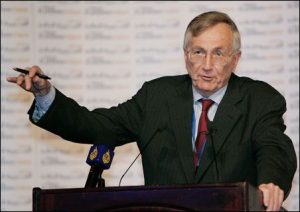 Furthermore, the technical evidence regarding the ‘hacking’ indicates there was no hack; that it was only (at least one) inside leak(s).

The charge that Russia had ‘hacked’ ‘the election’ is the core ‘justification’ given for the 98-2 Senate and 419-3 House passage of the great hike in anti-Russia economic sanctions. Clearly, this Congress — both Parties in it — are determined to squeeze Russia harder and harder until it’s conquered. Maybe the reason why Trump signed this bill into law (which would have easily passed over his veto if he had vetoed it) is so as not to give Congress an additional ‘reason’ to impeach and replace him by Mike Pence, whom both Parties in Congress seem to prefer.

America invaded Vietnam on the basis of lies. We invaded Iraq on the basis of lies. We’ve done much else — in Libya, Syria, and Ukraine etc. — on the basis of lies. Are our leaders preparing to invade Russia on the basis of lies? (If so, those lies started on 24 February 1990.) How much longer will the American public continue rewarding (instead of demanding prosecution of) the liars who are promoting Lockheed Martin and the rest of the US military-industrial complex and destroying countries one after another? America isn’t being ruled by the military; it’s being ruled by the Military-Industrial Complex. To understand the MIC, the «revolving door» is essential. Without that revolving door, America could be a democracy. But that revolving door is controlled by billionaires; and, by means of it, the billionaires control the US government. The divisions within the US government are only superficial, as is clearly shown by that virtually unanimous vote (98-2 and 419-3) in Congress, for lies. It’s now become almost lock-step, in Washington. The US aristocracy controls the US MIC, by controlling both the government and the press. The only way to become a serious contender, to win a seat in Congress, or especially to win the Presidency, is to be acceptable to billionaires — Republican, Democratic, or otherwise. And America’s billionaires are virtually unanimous in their determination to conquer Russia. 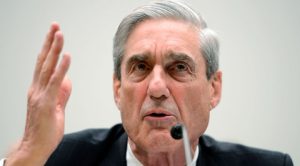 This is not likely to end well. Robert Mueller (pictured) has now impanelled two grand juries in order to find some crime by the President that’s part of his Russiagate investigation, so that Trump can be criminally charged, then impeached, and then replaced by the hard-right neoconservative Mike Pence. At the present stage, it’s an «investigation in search of a crime», and probably one or more crimes will be found on which Trump can be prosecuted; but, why weren’t Barack Obama’s crimes even searched for (I could name several he could almost certainly have been indicted for, including his aiding and abetting the American public’s actual enemies in his policies on Honduras, Libya, Syria, Yemen, Ukraine, and elsewhere — and his protecting mega-banksters whose frauds had produced the 2008 economic collapse, and he even told them privately «I’m protecting you»), much less investigated at all? Obviously, America’s aristocracy detest Trump, though he’s one of them. Trump is trying to give them almost everything they want, but that’s clearly not sufficient. He’s not bad enough to satisfy them, and they’re in control. Most recently, the lies they are pumping out have focused against Venezuela. Only ignoramuses and fools still trust the honesty of the US government, and of its sycophantic press, which is controlled by the same aristocracy — both Parties of it. Some ‘democracy’!

Investigative historian Eric Zuesse is the author, most recently, of  They’re Not Even Close: The Democratic vs. Republican Economic Records, 1910-2010, and of  CHRIST’S VENTRILOQUISTS: The Event that Created Christianity.

Is The UK Manufacturing Its Nerve Agent Case For ‘Action’ On Russia?

Ecuador Grants Citizenship To Assange Amid “Threats To His Life”