The Variable-Rate World Stares Into The Abyss – Again

Back in 2013 interest rates in the US and elsewhere started to rise, and the results were scary to put it mildly. Here’s an excerpt from a column that appeared here in July of that year:

Interest rates soared again last week. This weekend a lot of people are running a lot of numbers and getting some terrifying results.

It seems that the past few years of falling interest rates have lulled a big part of the global economy into financing with variable-rate debt. So when interest rates go up, there’s a world-wide reset in interest costs that, best case, amounts to a tax increase on individuals and businesses and, worst-case, threatens to blow up the whole system.

The most familiar but least worrisome part of this story is the adjustable rate mortgage, or ARM, which is basically a teaser-rate home loan that rises over time towards the prevailing 30-year fixed rate. The latter rate jumped from 3.5% to 4.5% in just the past month, which means ARM resets are now aiming at a higher target. For ARM holders, the resulting higher monthly mortgage payment is exactly like a pay cut or tax increase, leaving less around at the end of the month for new cars, vacations, etc. So discretionary spending drops and, other things being equal, the economy slows down.

Another victim is the long-term bond. Retail investors poured about $1 trillion into bond funds between 2009 and 2012, in part because bonds had been going up pretty much forever, and in part because investors were scared and bonds were sold by credulous financial planners as safe.

For a while it worked. Bond prices soared as long-term rates kept falling, which helped both individuals and pension funds rebuild capital lost during 2009’s debacle. But since the beginning of this year US bond funds have seen $60 billion depart, while bonds themselves have fallen hard (though, okay, not nearly as hard as gold). The price of US 20-year Treasuries, for instance, is down by almost 15% since April.

In other words, the “safe” part of individual and institutional portfolios is tanking. Here again, this is like a big pay cut which makes the holders of these funds less rich and therefore less likely to spend money.

But the real systemic risk enters with sovereign debt. One of the many ways the US, Japanese and European governments hide the effects of their mounting debt is by doing most of their borrowing for short periods of time, a few months to one year, where rates are close to zero and money is effectively free. In some cases short-term rates have fallen faster than borrowing has risen, producing lower interest costs even while debt has been piling up. Now, with long-term rates rising, governments have a choice: either roll their maturing long-term debt into very short-term paper, which would keep interest costs down but make it necessary to roll over even more debt each year, or keep the maturity of their debt constant and see their interest costs rise dramatically. Or have their central banks buy even more debt and write off the interest, which might prolong the lie for a while, but at the risk of a tidal wave of newly-created currency wreaking various kinds of havoc.

Now for the big one: Hedge funds and money center banks have created hundreds of trillions of dollars of interest rate swaps, in which holders of a security that pays a fixed rate of interest exchange this income stream for a variable stream based on some benchmark interest rate. The players on the variable-rate side of the bet lose big if rates keep rising. And most money center banks and many, many hedge funds are in this position. All it will take is a few of them to be overwhelmed by these bets going sour to pull down the whole show — exactly as happened with credit default swaps in 2009.

The interesting (if that’s not too neutral a word) thing about all this is that the events mentioned here will happen simultaneously if rates keep rising. ARM and bond fund holders will have less money to spend, slowing economic growth; governments will see their interest costs spike, making borrowing more expensive and risking a flight from their now clearly-mismanaged currencies; and derivatives markets will see growing instability in interest rate swaps, which might threaten rest of the rat’s nest that is the global banking community.

All because interest rates return to historically normal levels.

Confronted with the above doomsday scenario, the major governments pushed interest rates back down – in many cases into negative territory. This granted the variable-rate world a temporary reprieve from the consequences of its mistakes — and allowed the worst offenders to ramp up their borrowing even further. Government debt soared, derivatives books expanded and mortgage and auto loans returned to pre-Great Recession levels.

Now rates are rising again. Check out the near-parabolic arc of US Treasuries: 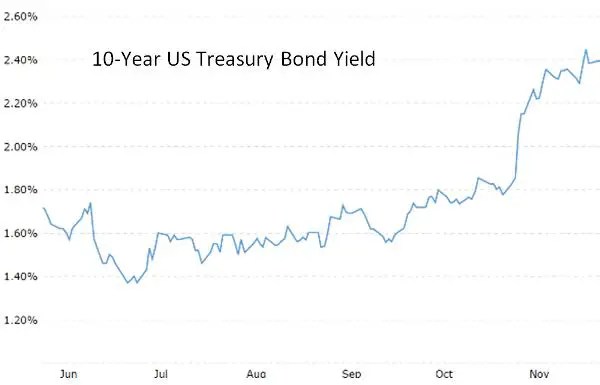 And the impact is, once again, being felt in the most rate-sensitive parts of the economy. Mortgage refinancing, for instance, is drying up:

(CNBC) – The highest interest rates in well over a year are putting a dent in the mortgage business. Total mortgage application volume fell 9.4 percent last week versus the previous week, on a seasonally adjusted basis. The Mortgage Bankers Association adjusted the weekly reading to account for the Thanksgiving holiday. Volume was 0.5 percent lower than the same week one year ago, the first annual drop in total volume since January.

“Mortgage lenders have been very thankful for a strong 2016 in terms of origination activity. However, mortgage application volume in the Thanksgiving week dropped sharply to the lowest level since early January, as mortgage rates increased to their highest point since July, 2015,” said Michael Fratantoni, chief economist for the MBA.

Refinance volume has been falling steadily as rates rise, but it took another sharp drop, down 16 percent for the week, seasonally adjusted. Refinances are most rate-sensitive and are now down 3 percent from a year ago, when rates were not much different than they are today.

The average contract interest rate for 30-year fixed-rate mortgages with conforming loan balances ($417,000 or less) increased to 4.23 percent last week from 4.16 percent, with points increasing to 0.41 from 0.39 (including the origination fee) for 80 percent loan-to-value ratio loans.

And bond investors are losing their shirts:

(CNBC) – Donald Trump’s stunning victory for the White House may mark the long-awaited end to the more than 30-year-old bull run in bonds, as bets on faster U.S. growth and inflation lead investors to favor stocks over bonds. A two-day thumping wiped out more than $1 trillion across global bond markets worldwide, the worst rout in nearly 1-1/2 years, on bets that plans under a Trump administration would boost business investments and spending while firing up inflation.

“We’ve had a sentiment shift in the bond market. People have already started reallocating out of bonds and into stocks, said Jeffrey Gundlach, chief executive officer of Los Angeles-based DoubleLine Capital, which has more than $106 billion in assets.

The stampede from bonds propelled longer-dated U.S. yields to their highest levels since January with the 30-year yield posting its biggest weekly increase since January 2009, Reuters data showed.

Bank of America/Merrill Lynch’s Global Broad Market Index fell 1.18 percent this week, the steepest percentage drop since June 2015, which is equivalent to more than $1 trillion. Its U.S. Treasury index suffered a 1.91 percent decline on a total return basis, the biggest weekly drop since June 2009.

Auto loan rates, meanwhile, are spiking, especially for subprime borrowers. This couldn’t come at a worse time for a bubble that already seems to be popping:

(Business Insider) – There is a lot of talk out there about the auto-loan market right now. Hedge fund manager Jim Chanos has said the auto-lending market should “scare the heck out of everybody,” while the auto-lending practices of some used-car dealerships has been given the John Oliver treatment on TV.

It’s a topic we’ve been paying attention to as well. In a presentation in September at the Barclays Financial Services Conference, Gordon Smith, the chief executive for consumer and community banking at JPMorgan, set out some eye-opening statistics on the market.

Now the New York Federal Reserve is taking a closer look at the market. In a blog published Wednesday on the New York Fed’s Liberty Street Economics site, researchers highlighted the deteriorating performance of subprime auto loans and set off the alarm.

“The worsening in the delinquency rate of subprime auto loans is pronounced, with a notable increase during the past few years,” the report said.

To be clear, the overall delinquency rate for auto loans is pretty stable, and the majority are performing well.

There are, however, signs of stress in the subprime market segment, which has seen rapid growth. Here are the key numbers from the report:

The subprime delinquency rate for the trailing four quarter period moved to 2% in the third quarter. The only other time it was 2% or more was in the aftermath of the financial crisis.

In other words, the subprime delinquency rate is creeping up, while the subprime market is ballooning in size. The Liberty Street Economics post, written by Andrew Haughwout, Donghoon Lee, Joelle Scally, and Wilbert van der Klaauw, said:

“The data suggest some notable deterioration in the performance of subprime auto loans. This translates into a large number of households, with roughly six million individuals at least ninety days late on their auto loan payments.”

Add it all up and a picture emerges of a system that can’t handle rising interest rates, but is nonetheless getting them. The result? At best a global slowdown and at worst an epic crisis. Wonder how the world’s governments will respond?

John Rubino runs the popular financial website DollarCollapse.com. He is co-author, with GoldMoney’s James Turk, of The Money Bubble (DollarCollapse Press, 2014) and The Collapse of the Dollar and How to Profit From It (Doubleday, 2007), and author of Clean Money: Picking Winners in the Green-Tech Boom (Wiley, 2008), How to Profit from the Coming Real Estate Bust (Rodale, 2003) and Main Street, Not Wall Street(Morrow, 1998). After earning a Finance MBA from New York University, he spent the 1980s on Wall Street, as a Eurodollar trader, equity analyst and junk bond analyst. During the 1990s he was a featured columnist with TheStreet.com and a frequent contributor to Individual Investor, Online Investor, and Consumers Digest, among many other publications. He currently writes for CFA Magazine

The author is not affiliated with, endorsed or sponsored by Sprott Money Ltd. The views and opinions expressed in this material are those of the author or guest speaker, are subject to change and may not necessarily reflect the opinions of Sprott Money Ltd. Sprott Money does not guarantee the accuracy, completeness, timeliness and reliability of the information or any results from its use.
#John Rubino, #economy, #Interest Rates, #Sprott Money

…The World Economy Is Headed For A Recession In 2019 Unless…