I must say I paid more attention this week to the continued unfolding of the Obama-Clinton “Russian collusion” poppycock, which seems to be coming to a certain closure with the investigative results made public and the consequent removal and prosecution of a number of high-ranking former and present officials.  In the meantime, Chuck Schumer, whose surname (per ancestry.com) is “a nickname from Middle Low German ‘good-for-nothing,’ ‘vagabond,'” revealed how aptly he is named.

In fact, the Democrats’ government shutdown gimmickry reminds me of nothing so much as the scene in the movie Animal House where Eric “Otter” Stratton offers up the notion that the situation absolutely requires a “futile and useless gesture, and we’re just the guys to do it.”

Congress has never passed a law respecting what should be done with the people who entered the U.S. illegally as minors and stayed on illegally.  In June 2012, by administrative decree, the Obama administration offered a renewable two-year deferred deportation action for people in this situation.  This program is known as DACA (Deferred Action for Childhood Arrivals).  The estimates of people involved ranges broadly from 800,000 to over 3 million.

In September of this year, the president rescinded this program.  The regents of the University of California and Janet Napolitano sued to enjoin the rescission, and Judge Alsup did so, apparently using a copy of the U.S. Constitution known only to practitioners and jurists in the Ninth Circuit.

A divided Supreme Court stayed a portion of that order dealing with government records underlying the rescission decision.

The substantive issue – the right of a new administration to rescind an administrative program not based on law – is pending.  In an unusual move, days ago, the administration sought a direct appeal of the ruling to the Supreme Court.

Thus, the matter is in judicial hands at the moment, and even if the rescission order stands – as it should – it will not take effect until March 5.  There is no great urgency on this issue.  In any event, if the Congress wants to preserve DACA, members of Congress are free to pass such a law or include it in the promised upcoming revision of immigration law.

Congress has not done so, because DACA is not popular with voters.  Even CNN pollsters indicate shutting that down the government to preserve this program is not a winning issue.

Chuck Schumer once acknowledged how unpopular government shutdowns are, as Paul Ryan reminded in a late Saturday tweet: 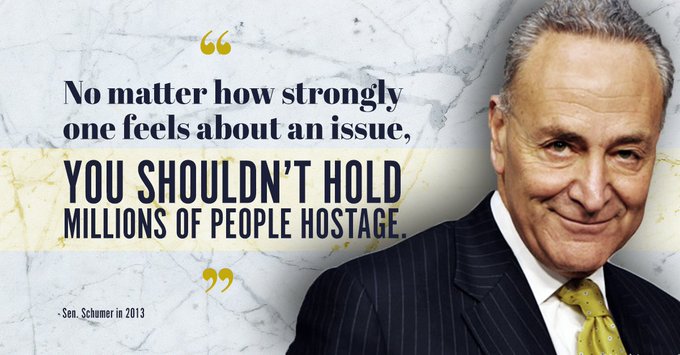 In 2013—the last time we found ourselves in this position—here is what Senator Schumer said: “No matter how strongly one feels about an issue, you shouldn’t hold millions of people hostage.” He was right! You shouldn’t. But that’s exactly what he and his party are doing now.

Still, the Democrats seem to have chosen this hill to die on.

I think the best analysis of the consequences of the shutdown is by my online friend Stephen B. Waters, publisher of the Rome, N.Y. paper who regularly fights a battle for better journalism with the Associated Press.  He offers up the following:

What if, because Dems pushed us over the cliff, they now have to pay a price?  Schumer can choose:

• No DACA but sign 4-week funding.
• DACA as part of a complete immigration plan.
• Just a continuing resolution into April.
• Lose the filibuster on appropriations.

Indeed, five Democrat senators voted for the continuing resolution, breaking ranks with their party’s majority: Joe Donnelly, Heidi Heitkamp, Doug Jones, Joe Manchin, and Claire McCaskill.  These are the Democrats most vulnerable in their re-election bids.  The consequences for the Democrats are going to be brutal, and Senator Mitch McConnell is planning to schedule many painful votes for Democrats heading into the midterms.

If the Democrats thought their pals in the press would buy their line that the Republicans are responsible for the shutdown, they miscalculated – for the most part – on that as well.

Even the press can count (sometimes).  The House voted for a continuing resolution with every provision to which the Democrats agreed.  It’s Schumer’s pals in the Senate, where it still takes 60 votes to stop a filibuster and the Republicans have only 51 seats, who jinxed the deal by adding untenable new demands.

As we once again witnessed the triumph of party over country, the finger[-]pointing will begin.  Because the Democrats essentially got everything they once demanded in a spending bill they threw in the “clean DACA” toward[] the end of debate in order to have a noble reason to refuse to sign on.  So we can’t have a functioning government budget because…[DREAM]ers!  Virtue[-]signaling not[]withstanding, the ball’s really in your court[,] Chucky.

Those of us who think that granting amnesty for 3.6 million (and counting) “[DREAMers]” – no matter the circumstances of their arrival – is a fool’s game will continue to be called racists.  So be it.

But wait – what’s this!?!  The media [aren’t] entirely embracing the Dem’s narrative?

The president celebrating the anniversary of his inauguration chided the opposition:

Democrats are holding our Military hostage over their desire to have unchecked illegal immigration. Can’t let that happen!

For those asking, the Republicans only have 51 votes in the Senate, and they need 60. That is why we need to win more Republicans in 2018 Election! We can then be even tougher on Crime (and Border), and even better to our Military & Veterans!

.
Will the public care?

Don Surber, one of the first to predict that Trump would win the presidency, argues that this shtick presages a midterm blue wave:

The public is loving it.  Congress cannot pull off a simple budget resolution.  The establishment politicians are so incompetent that they cannot even figure out how to spend money.

Trump meanwhile has forced Kim Jong[-u]n to make nice and hold hands with the South Koreans over the Winter Olympics, has brought factories back to the country and rebuilt the economy, killed off the Islamic State, and just for fun made the NFL ratings tank by 10%. …

The shutdown is the best news some of us have had in five years since the last government shutdown.  That one lasted 15 days.

That time they were fussing over funding Planned Parenthood and Obamacare.  It failed to stop the funding.  These shutdowns usually fail.

This time, Democrats are demanding amnesty for every illegal border-jumper and their eight million relatives.

Government shutdowns are reminders that we really don’t need all that government.

If you were the party of big government, you might be better off not reminding people of that.

It doesn’t help the Democrats that they are struggling to explain why they did it.

To take just one point from this well written article explaining the genesis of the Schumer pratfall:

Republicans are perfectly willing to deal on DACA.  Trump and even the most conservative Republican leaders have proposed a true compromise and even written legislation that reflects it.  Reps. Bob Goodlatte (R-Va.) and Michael McCaul (R-Texas) proposed legislation that grants permanent amnesty to DACA recipients, in addition to common[]sense border security and enforcement provisions.  Having rejected this proposal, Democrats are claiming they’ll block government funding until a more favorable compromise to them emerges.

Did Schumer imagine that Trump would deal with the shutdown in the revolting way his predecessor did – unnecessarily paying rangers to keep people from long planned vacations to national parks and ancient veterans from visiting the memorials on the National Mall?  If so, he’s sadly mistaken. 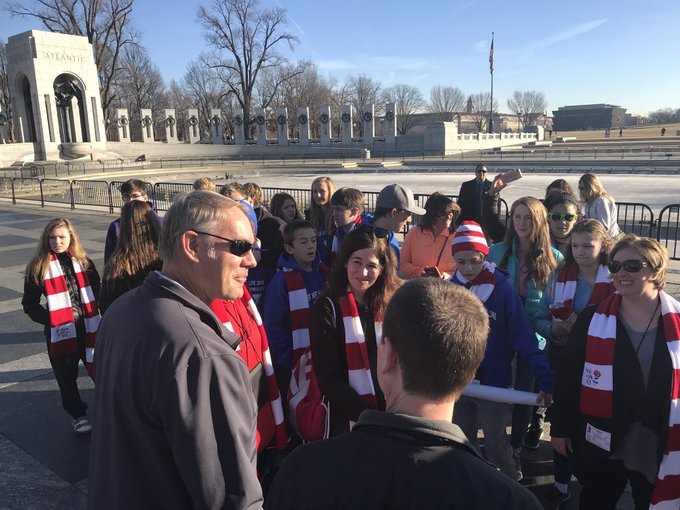 Ensuring our @NatlParkService parks are as accessible as possible. Wonderful to meet students from Illinois.

Over at Just One Minute Typepad, Tom Maguire agrees:

I take for granted that Trump won’t engage in Obama-style [“]Shutdown Theater[“] and start closing visible yet inexpensive things like the Lincoln Memorial.  That could be trouble for the Dems, since how will we miss the government if we don’t notice it is gone?  Time will tell.

In any event, this foot-stamping, in which the Democrats reveal they care more for illegal aliens than they do for the country and the people who legally live here, is likely to be short-lived.  Mick Mulvaney, White House Office of Management and Budget director, predicts that Congress will avoid a government shutdown this weekend, before civil service employees are due to return to work.

In fact, it may be over by the time you read this.

TLB published this commentary from American Thinker with our gratitude to Clarice Feldman for a great read.

John Durham report is coming, some people will go to prison