The “new face” of the Democratic party, 28-year-old Alexandria Ocasio-Cortez, botched yet another simple question about her political views that sheer spunk and tenacity couldn’t overcome.

During an appearance on last night’s Daily Show, host Trevor Noah pitched Ocasio-Cortez perhaps the slowest softball he could – asking her to explain how she’s planning on paying for her “Medicare for All” agenda along with her other ideas on funding Democratic Socialism, reports the Daily Caller.

“This is an excellent question,” she replied – the standard response to buy time while one’s brain clicks away at various options.

Unfortunately, the rest of her answer did not compute:

“I sat down with a Nobel Prize economist last week — I can’t believe I can say that, it’s really weird — But one of the things that we saw is, if people pay their fair share, if corporations and the ultra wealthy — for example, as Warren Buffett likes to say, if he pays as much as his secretary paid, 15 percent tax rate, if corporations paid — if we reverse the tax bill, raised our corporate tax rate to 28 percent … if we do those two things and also close some of those loopholes, that’s $2 trillion right there.”

She also said it would take $3 trillion to $4 trillion and a carbon tax to create a “renewable energy economy” and claimed the Trump tax cut bill prevents the wealthiest Americans from paying “their fair share.”

“One of the wide estimates is that it’s going to take $3 trillion to $4 trillion to transition us to 100 percent renewable economy,” she continued. –Daily Caller

“So we’ve got $2 trillion from folks paying their fair share, which they weren’t paying before the Trump tax bill,” she said. “They weren’t paying that before the Trump tax bill. If we get people to pay their fair share, that’s $2 trillion in 10 years. Now if we implement a carbon tax on top of that, so that we can transition and financially incentivize people away from fossil fuels, if we implement a carbon tax — that’s an additional amount, a large amount of revenue that we can have.”

Ocasio-Cortez also said that she would “re-prioritize” military spending, shooting off the completely false claim that “Just last year we gave the military a $700 billion budget increase, which they didn’t even ask for.” “They’re like, ‘We don’t want another fighter jet!’ They’re like, ‘Don’t give us another nuclear bomb,’ you know?”

“The Daily Show” host @Trevornoah asked Socialist congressional candidate Alexandria Ocasio-Cortez (@Ocasio2018) how she plans to pay for her agenda.

It really is hard to watch. pic.twitter.com/OGiPAArlce

Literally everything Ocasio-Cortez says about the military is false. Mattis not only asked for more money; he lobbied for it. And she confuses the total budget with the amount increased.

“The Daily Show” host @Trevornoah asked Socialist congressional candidate Alexandria Ocasio-Cortez (@Ocasio2018) how she plans to pay for her agenda.

It really is hard to watch. 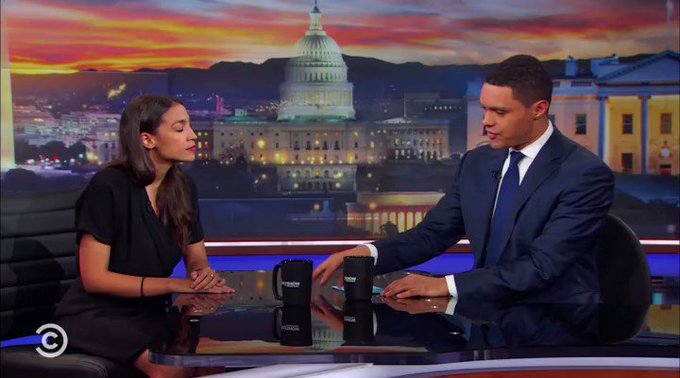 (TLB) would like to remind Ms. Ocasio-Cortez that  2007, Ms. Teen South Carolina – Lauren Katlin – had similar problems getting her brain to connect with the question…  (Sorry for the very Rough language inserted by the video producer after Miss Katlins statement. Bail out at :46 to avoid.)

Keep making these kinds of media appearances Alexandria and you too can go down in the Annals of “What Not to Do in Public.” By some quirk of fate, should you become a member of Congress, you can hang out with Maxine Waters and play in her sandbox. Even if you don’t make it to D.C…. not to despair, in either case your name will live in infamy when it is used as A Bad Example. (TLB ed.)

The Socialist congressional candidate falsely claimed that the military budget was increased by $700 billion last year.

That figure refers to the total amount authorized for fiscal 2018 national defense spending, not the increase from the year before.https://washex.am/2OmwSRS

No wonder James Comey and the rest of the establishment left is absolutely freaking out over the “rising star.”

Democrats, please, please don’t lose your minds and rush to the socialist left. This president and his Republican Party are counting on you to do exactly that. America’s great middle wants sensible, balanced, ethical leadership.

(TLB) published this article from ZeroHedge as compiled by Tyler Durden with our thanks.