Why Is Bernie Sanders’ Chief Strategist’s Name All Over Manafort Evidence?

by Tyler Durden
.
A curious name appeared on an itemized list released on Wednesday of evidence in the trial of former Trump campaign chair Paul Manafort.

Bernie Sanders’ Chief Strategist Tad Devine – who appears to have had extensive contact with Manafort via email under such subjects as:

The emails span the period which include Manafort’s  2012-2014 lobbying effort for a pro-Ukraine think tank tied to former president Viktor Yanukovych. Yanukovych fled from Ukraine to Russia after he was unseated in a 2014 coup. 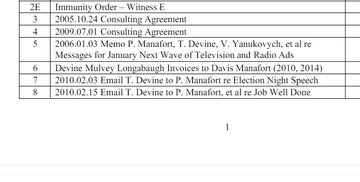 Robert Mueller just submitted his list of evidence for the Paul Manafort trial and look whose name is all over the first 30 items.

Manafort’s firm earned $17 million consulting for Yanukovych’s centrist, pro-Russia ‘Party of Regions.’ During the same period, he oversaw a lobbying campaign for the pro-Russia “Centre for a Modern Ukraine,” (ECMU) a Brussels based think tank linked to Yanukovych which was pushing for Ukraine’s entry into the European Union.

Of note, the now defunct Podesta group, operating under Manafort, earned over $1.2 million as part of that effort.

While the Podesta group and Manafort both failed to file paperwork related to the Pro-Russia Centre for a Modern Ukraine, retroactive disclosures filed by the Podesta group on August 17 revealed dozens of previously unreported communications with high level democrat officials related to the lobbying campaign – including Hillary Clinton’s State Department and the office of former Vice President Joe Biden.

And now it appears we can add Bernie Sanders’ Chief Strategist to the list of Manafort associates.

On this list of evidence to be used at Manafort’s trial – wasn’t Devine Bernie Sanders’s campaign manager?

I told y’all Bernie Sanders was working with Donald Trump and Putin!

I told y’all to follow the money behind Tad Devine and Paul Manafort.

People tried to dismiss me as just another Hillary Clinton supporter, nope, I’m a student of politics, and it was clear and present.

(TLB) published this article from from ZeroHedge with our gratitude to Tyler Durden for making it available.