You have to understand what we’re dealing with here, an extreme tyrant by the name of Susan Wojcicki.

Her sister is Anne and Anne is married to Google co-founder, Sergey Brin. Susan is also worth ~$400 million — and she’s very smart, and she’s been the CEO of Youtube since 2014. However, after the elections, the free speech mood over at YT changed and Susan promised to do something about it. She promised to crack down on fake news and also demonetize hate speech. Because the platform is so big, she deployed machine learning idiot robots to do this. The subsequent result was the complete destruction of the Youtube community. People who’ve made their lives on YT, professional vloggers, went from making hundreds of thousands to almost nothing at all. The iBankCoin channel, which is now suspended for posting “hate speech” in the form of a CNN interview, went from netting monthly revenues of $4,000 to a few hundred bucks. Lucky for me, I don’t need that money. 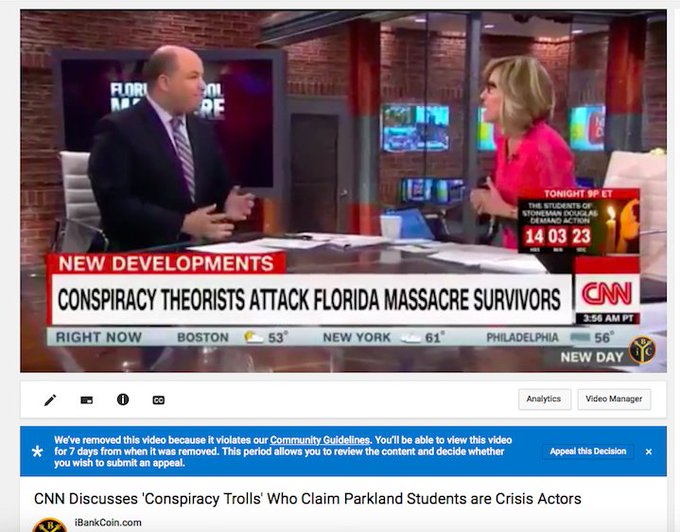 Youtube hit iBankCoin with second strike for publishing main stream content which they said violated community guidelines. What in the actual fuck!? One more strike and they delete the channel.

So off Susan went, furthering and deepening her crusade against what she deemed to be hateful speech. She has since expanded that mantra to include ‘conspiracy’ videos. I imagine ‘fake lunar landing’, 9/11 was an inside job, the illuminati runs the world’, and everything you needed to know about ‘aliens’ videos will soon be deleted from Susan’s website.

Because she said so.

You’re a dumb goat and cannot make good decisions, so she’ll make them for you. Don’t worry, it’s a private company and they can do whatever they want, just like the electricity company is private and can shut off your lights if they felt like it. Quit being anti-capitalist.

In the event she doesn’t remove your video, she might just myth bust it with links posted to your video, against your will. And, there’s nothing you can do about it.

Conspiracy videos abound on YouTube, whether it’s about the Earth being flat or school shootings being staged. YouTube, its parent Google, Facebook and Twitter are all facing challenges with the spread of misinformation, propaganda and fake news.

YouTube CEO Susan Wojcicki said at a conference Tuesday that the company will include links to the online encyclopedia Wikipedia to try to debunk videos espousing conspiracy theories.

But Wikipedia itself has had its share of credibility issues, as the service lets anyone edit its content, whether that person is a pedigreed expert or an online troll. Though Wikipedia has tried to address that — in part by restricting edits on high-profile or controversial pages — it isn’t immune from hoaxes and its own conspiracy theories.

In a statement Wednesday, YouTube said the links will include other “third-party sources” besides Wikipedia, though YouTube isn’t identifying any. The organization that runs Wikipedia said Wednesday that it had no formal partnership with YouTube, but welcomed the use of Wikipedia resources.

YouTube said the move is part of a broader initiative to crack down on misinformation, though it did not give details on what else is in the works.

While conspiracy videos are nothing new on YouTube, the topic received renewed attention in recent weeks as videos falsely claimed that students speaking out about the Feb. 14 Florida school shooting, which killed 17 people, were “crisis actors” who were not really there when it happened. One such conspiracy video was the top trending video on YouTube until the company removed it — although many similar videos remained up, illustrating the difficulty in instituting any sort of crackdown.

Conspiracy videos, to be sure, are not against YouTube’s policies. In the “crisis actor” case, the company said it removed the video because it violated its rules against harassment. As such, YouTube is unlikely to ban misinformation entirely. Instead, it may adopt Facebook’s tactic of de-emphasizing such content and making it less likely to be seen. As it stands, critics say YouTube is doing the opposite.

How is Susan able to accomplish this gigantic task?

During supper she asked her brother in-law, Sergey, if she could hire 10,000 people to ‘clean up’ Youtube and he thought about it, whilst rapidly swishing some Bordeaux in his wine glass, and then he said yes. She then asked if she could employ the ultra-left leaning Southern Poverty Law Center to help clean it up and again he gave it some thought, and then his wife Anne touched his hand and looked at him and said ‘please sweet heart, do it for me’ and again he said yes.

The net result has been scorched earth ever since, with thousands of right of center content providers being ‘accidentally’ purged.

The one silver lining in all this is the likelihood that we’ll never have to see a flat earth video again, no matter how interesting it might be.

This post was brought to you by the good folks at iBankCoin.com

TLB published this post from where it first appeared at ZeroHedge.

Since when did people start going to college to get stupid?

Trump Fires John Bolton After “Disagreeing Strongly With His Suggestions”