Vulnerabilities from safe haven in Afghanistan to insecure border are raising red flags for counterterrorism fighters.

By John Solomon and Charlotte Hazard

As America observes the 21st anniversary of the deadliest attack on U.S. soil, security experts and current and former government officials say this is the first Sept. 11 commemoration to face the reality that the war on terror has taken measurable steps backward.

Former FBI, Homeland Security and border patrol executives say the unprecedented numbers of illegal migrants with terrorism ties that have crossed the porous southern border under President Joe Biden and the resurgence of an Afghanistan safe haven for Al-Qaeda and ISIS terrorists have increased the danger to Americans.

“Since the founding of the Department of Homeland Security, which was back in 2003, each subsequent administration has built on counterterrorism measures, and has made progress in strengthening that,” former acting Homeland Security Secretary Chad Wolf told the “Just the News, Not Noise” television show on Friday.

Former acting Defense Secretary Christopher Miller, who served in Afghanistan as a soldier, said nothing worries him more than U.S. intelligence warnings that Afghanistan since the U.S. troop pullout has been reconstituted by the Taliban, al-Qaeda and ISIS as a terrorist safe haven where future planning of attacks can occur.

“What I saw in Afghanistan is by pulling out the way that we did, we lost our eyes and ears,” Miller told the John Solomon Reports podcast on Friday. “We lost a significant degree of intelligence. So not only did it return to a safe haven and a terrorist operating base, at the same time we’ve lost key intelligence. And so I feel after more than two decades now, I feel like we’ve given up so much that we gain through intelligence. And I’m just worried.”

Miller’s and Wolf’s warnings are validated by U.S. intelligence and military leaders, who told Congress that major terror groups are just one to two years away from being able to launch terror attacks from within Afghanistan.

“We could see ISIS-K generate that capability in somewhere between six or 12 months,” Colin Kahl, the Defense Department’s undersecretary for policy, told the Senate Armed Services Committee. “And for al-Qaeda, it would take a year or two to reconstitute that capability.”

While military, homeland and intelligence experts say the threat has worsened on Biden’s watch, the White House defiantly claims such concerns are overstated, pointing to the recent strike that killed Osama bin Laden successor and al-Qaeda leader Ayman Al-Zawahiri earlier this summer.

Al-Qaeda “does not have a capability to launch attacks against the U.S. or its interests abroad from Afghanistan,” and “neither the few remaining [al Qaeda] core members nor its regional affiliate are plotting to attack the Homeland,” White House National Security Council spokeswoman Adrienne Watson recently wrote in a memo.

That assessment, however, is an outlier, according to a half dozen intelligence officials interviewed by Just the News. “The bottom line is threat levels are higher, we are blinder, and terror groups are more emboldened,” said one U.S. intelligence official, who spoke only on condition of anonymity.

Those concerns extend far beyond the Afghan region. Texas Gov. Greg Abbott recently revealed that more than 80 illegal migrants who have crossed the border since Biden became president were flagged in U.S. databases as having known terrorist ties. Biden’s “refusal to secure the border is a direct threat to our national security,” he warned.

Abbott’s numbers, however, don’t include what U.S. officials call “gotaways,” the estimated one million illegal migrants who got into the country since 2021 without detection, said former acting Customs and Border Protection Commissioner Mark Morgan, who is warning the terror threat from the open border is far greater.

“I always think how many illegal aliens on the FBI terror screening database are in this country, and I keep saying the next terrorist threat could already be plotting inside the United States,” Morgan told Just the News in an interview with the John Solomon Reports podcast. “It’s unconscionable.”

Morgan’s assessment was recently echoed by FBI Director Chris Wray, who told Congress last month of his concerns about the insecure, chaotic border Biden ushered in.

“To me, it represents a significant security issue and represents a wide array of criminal threats that flow out of it,” Wray testified.

Former NYPD Commissioner Bernard Kerik and former New York City Mayor Rudy Giuliani, widely honored for their effort to rally the Big Apple from the deadly terror attacks of 9-11, said they fear the next attackers are already on U.S. soil. 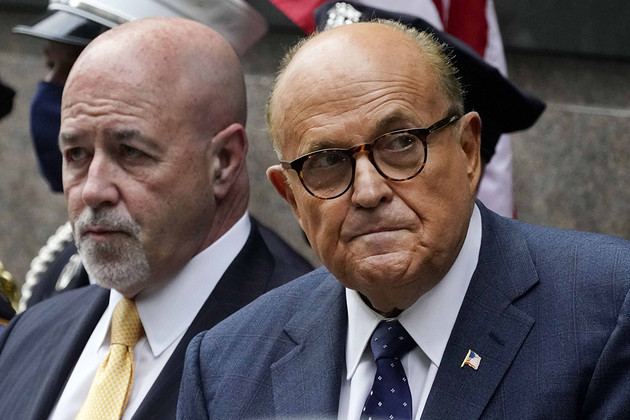 “I don’t have the slightest doubt that we are in much more peril today than we were in on the day before September 11,” Giuliani said on “Just the News, Not Noise.”

“That wasn’t true for about 17 or 18 years,” he continued. “We had done a pretty good job of dealing with securing the United States. And I would always say, you know, ‘We’re not perfect, and we’re still vulnerable, but we’re in better shape now.

We’re in worse shape now. What happened in Afghanistan really reversed the whole thing. Just think about it. They are training to come here and kill us with $85 billion of our equipment and an Air Force base.”

Wolf said America’s counterterrorism strategy has always been most successful when threats are accurately and honestly assessed and communicated to the public and that the Biden administration has disrupted that success by politically focusing more attention on conservative extremists and not enough on foreign bad actors.

“You would think that the only threats to the Homeland today are either white supremacists or MAGA Republicans that the President talked about,” Wolf said. “They don’t talk about the foreign terrorist organizations. They don’t talk about ISIS and al Qaeda in Iran, in China and all these adversaries that we have across the world that want to do harm to Americans every single day.”

Given the rising foreign terrorist threat within U.S. borders, the American people themselves must be vigilant, acting as law enforcement’s eyes and ears of the ground, Wolf argues — but they can’t be part of the solution if the BIden administration won’t level with them about the problem.

“If you don’t arm [the American people] with the facts, if you say nothing’s going on, there’s no crisis at the border, no one’s coming across, we’re good here, we’re good there, then you’re giving the American people a false sense of security in a way, and I think that’s very dangerous,” he said.