Facebook has blocked some TLB staff from Sharing this Article. Please go to our Home Page and share to groups and friends.

In 1970, Uganda passed the Firearms Act which banned the purchase and ownership of firearms and ammunition. One year later, a terrible dictator named Idi Amin seized power of the Ugandan government. The country was about 60% Christian and 6% Muslim at the time, but Amin wanted Uganda to be strictly a Muslim nation. Shortly after his rise to power, Amin ordered the execution of both Protestants and Catholics that lived in Uganda. After 9 years of brutality, Amin’s regime killed up to 500,000 people, which were mostly Christians. Had they not given up guns a year before the dictatorship came to power, they could have put up resistance to Amin’s tyranny. 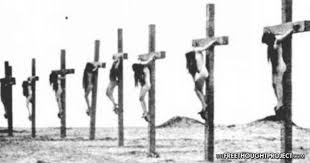 Almost everyone on earth knows at least some of the details behind Adolf Hitler’s mass slaughter of over 6 million Jews. However, not everyone knows that Hitler made sure that the Jews were disarmed before he started the heinous acts. In 1938, the Nazis passed legislation called Regulations Against Jews’ Possession of Weapons, which effectively disarmed the Jews. Several years later, one of the worst acts of violence had been committed, and of course, the people who suffered were defenseless.

Guns were common in Russia until communist dictator Joseph Stalin took power. They were used for most often for hunting. Both sides of the civil war (Communists and Royalists) found them essential for self-determination. Once Stalin took power, he decided that to maintain that power he better disarm his citizens. What followed was possibly the worst genocide of all time. I say “possibly” because another communist, Mao Zedong, may have topped it. Mao did what most dictators do before a mass killing spree and banned firearms. Together, Mao and Stalin killed an estimated 100 million people. They could have not gotten away with such terrible acts if the victims were armed.

This example doesn’t deal with personal firearms but is still a great modern example of why not to trust authority when it comes to your right to defend yourself. In 2003, Libya made an agreement with the US to give up all of its biological, chemical and nuclear weapons. In 2011, with Libya relatively defenseless, the US led a coup to kill Gaddafi and overthrow his government. For the sake of self-preservation, Libya should have kept its means to protect itself. This lesson was learned by North Korea, which is why they refuse to give up their nuclear program now.

There are many past examples of why you should not let governments take away your firearms, and I’m sure there will be many more examples in the future. Let’s hope enough Americans understand how important the right to bear arms truly is. You have a right to life and a right to preserve your life how you see fit. Tyrants are always lurking in the shadows eager to deprive you of your life, liberty and property. Stay armed and willing to protect your rights and the rights of those you love.

TLB published this article from  IWB (Investment Watch Blog) with our thanks for making it available.

The Less We Believe Them about Las Vegas, the More They Want Our Guns