As we digest and unpack the DOJ Inspector General’s 500-page report on the FBI’s conduct during the Hillary Clinton email investigation “matter,” damning quotes from the OIG’s findings have begun to circulate, leaving many to wonder exactly how Inspector General Michael Horowitz was able to conclude:

“We did not find documentary or testimonial evidence that improper considerations, including political bias, directly affected the specific investigative actions we reviewed”

We’re sorry, that just doesn’t comport with reality whatsoever. And it really feels like the OIG report may have had a different conclusion at some point. Just read IG Horowitz’s own assessment that “These texts are “Indicative of a biased state of mind but even more seriously, implies a willingness to take official action to impact the Presidential candidate’s electoral prospects.”

More from IG Horowitz in #IGReport: These texts are “Indicative of a biased state of mind but even more seriously, implies a willingness to take official action to impact the Presidential candidate’s electoral prospects. This is antithetical to the core values of the FBI & DOJ.”

IG Horowitz concludes, ever so conveniently, that while there was bias & irregularities in Comey’s FBI, there was no evidence Hillary investigators acted on their bias. In other words, no intent. Sound familiar? Just like Comey argued in exonerating Hillary: no evidence of intent

Of course, today’s crown jewel is a previously undisclosed exchange between Peter Strzok and Lisa Page in which Page asks “(Trump’s) not ever going to become president, right? Right?!” to which Strzok replies “No. No he’s not. We’ll stop it.“

As you read through the IG report, just remember everyone, there were zero scandals in the Obama administration

The Wall Street Journal’s Kimberley Strassel also had plenty to say in a Twitter thread:

2) It means he didn’t catch anyone doing anything so dumb as writing down that they took a specific step to aid a candidate. You know, like: “Let’s give out this Combetta immunity deal so nothing comes out that will derail Hillary for President.”

3) But he in fact finds bias everywhere. The examples are shocking and concerning, and he devotes entire sections to them. And he very specifically says in the summary that they “cast a cloud” on the entire “investigation’s credibility.” That’s pretty damning.

4) Meanwhile this same cast of characters who the IG has now found to have made a hash of the Clinton investigation and who demonstrate such bias, seamlessly moved to the Trump investigation. And we’re supposed to think they got that one right?

5) Also don’t believe anyone who says this is just about Comey and his instances of insubordination. (Though they are bad enough.) This is an indictment broadly of an FBI culture that believes itself above the rules it imposes on others.

7)It also contains stunning examples of incompetence. Comey explains that he wasn’t aware the Weiner laptop was big deal because he didn’t know Weiner was married to Abedin? Then they sit on it a month, either cuz it fell through cracks (wow) or were more obsessed w/Trump

8) And I can still hear the echo of the howls from when Trump fired Comey. Still waiting to hear the apologies now that this report has backstopped the Rosenstein memo and the obvious grounds for dismissal.

So, let’s review more of the exchanges which had no bearing on the “unbiased” report:

“OIG discovered texts and instant messages between employees on the investigative team, on FBI devices, expressing hostility toward then candidate Donald Trump and statements of support for then candidate Hillary Clinton.”

This jumps out on the first page of the #IGReport “OIG discovered texts and instant messages between employees on the investigative team, on FBI devices, expressing hostility toward @realDonaldTrump and statements of support for Hillary Clinton.”

In one shocking exchange between two unnamed FBI employees which we assume to be Strzok and Page, “Attorney 1” asks “Attorney 2” “Is it making you rethink your commitment to the Trump administration?” to which “Attorney 2” replied “Hell no,” adding “Viva le resistance.”

Jawdropping bias and misconduct illustrated and this isn’t even the Russia IG Report.

Who is “FBI Attorney 2?” Why was he texting other FBI officials “Viva le resistance” while working for Mueller as the primary FBI lawyer? Did Mueller really recruit out of the #Resist movement at FBI?! #WitchHunt from the beginning!

Some of Strzok and Page’s greatest hits:

February 12, 2016, Page:  “I’m no prude, but I’m really appalled by this. So you don’t have to go looking (in case you hadn’t heard),
Trump called him the p-word. The man has no dignity or class. [texted the FBI agents having an extramarital affair] He simply cannot be president.

February 12, 2016, Strzok:  “Oh, [Trump’s] abysmal.  I keep hoping the charade will end and people will just dump him.  The problem, then, is Rubio will likely lose to Cruz.  The Republican party is in utter shambles. When was the last competitive ticket they offered?”

March 3, 2016, Page: “Also did you hear [Trump] make a comment about the size of his d*ck earlier? This man cannot be president.”

March 12, 2016:  Page forwarded an article about a “far right” candidate in Texas, stating, “[W]hat the f is wrong with people?”  Strzok replied, “That Texas article is depressing as hell.  But answers how we could end up with President trump.”

March 16, 2016, Page: “I cannot believe Donald Trump is likely to be an actual, serious candidate for president.”

June 11, 2016, Strzok: “They fully deserve to go, and demonstrate the absolute bigoted nonsense of Trump.”

July 19, 2016, Page: “Trump barely spoke, but the first thing out of his mouth was ‘we’re going to win soooo big.’The whole thing is like living in a bad dream.”

July 21, 2016, Strzok: “Trump is a disaster. I have no idea how destabilizing his Presidency would be.”

September 26, 2016, Page:  Page sent an article to Strzok entitled, “Why Donald Trump Should Not Be President,” stating, “Did you read this?  It’s scathing.  And I’m scared.” 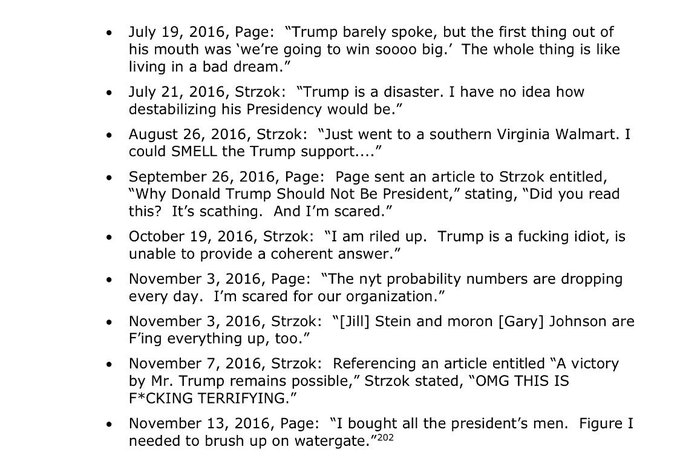 FBI Agent Peter Strzok and FBI Lawyer Lisa Page texts in the #IGReport are telling. Page at one point 5 days after the election says “I bought all the presidents men. Figure I need to brush up on Watergate.”

Now why would they be worried about brushing up on Watergate?

Strzok also refers to having “unfinished business” and a need to “fix it” – while also admitting that “there’s no big there, there” presumably regarding the Trump-Russia investigation.

While there are many more damning revelations in the OIG report, one would think that given the above, there was more than enough evidence to, at minimum, launch a special counsel – especially when you consider the weak sauce used to justify Mueller’s special counsel probe.

IG found that on numerous occasions, COMEY used a personal GMail account to conduct official FBI business, according to source briefed on the report.

[President Trump weighed in on the IG’s report this morning when he unexpectedly came out of the West Wing of the White House and walked across the lawn to where the press was assembled and gave this exclusive rundown to FOX News about the IG’s report and other events that have taken place during the past weeks…. ~TLB]

(TLB) published this article, compiled by Tyler Durden, from ZeroHedge with our thanks for the availability.

Buchanan: Has Trump Found The Formula For 2020?