Adam Schiff Is Proven To Be A Liar…Again

The latest example comes courtesy of some of his comments about Devin Nunes’ memo dealing with the FISA abuse scandal. If you’ll recall, Nunes was relentlessly savaged for over a year by Democrats and #nevertrumpers for releasing a memo detailing misconduct by the FBI/DOJ within their investigations of the Trump campaign. The same people who were fully supportive of every investigative inquiry of Trump, treating them as sacrosanct and untouchable, suddenly decided that investigations of clear bureaucratic corruption were not only off-limits but “dangerous” to our democracy.

See mouth frothing replies such as this…

Senator McConnell & Speaker Ryan: If Mr. Trump continues along this disastrous path, you will bear major responsibility for the harm done to our democracy. You do a great disservice to our Nation & the Republican Party if you continue to enable Mr. Trump’s self-serving actions. https://t.co/uAhgL6wfIC

That was back in May of 2018, after President Trump called for an IG investigation (which is still ongoing) into how the FBI/DOJ handled all of this. Since then, far more has come to light and with every passing day Devin Nunes is proven right while Adam Schiff is proven to be the lying snake that he is.

My RedState colleague, streiff, covered some of the latest two days ago.

But this shows the extent to which Schiff was willing to go to try to cover up the actions of Bruce Ohr because he knew that those actions indicated a long-term effort to damage Trump’s election chances. Schiff says Ohr did not meet with Steele until after the election:

Ohr said he met with Steele on July 30, 2016 (see page 27). He spoke with Glenn Simpson in August and took information from Simpson to the FBI (see page 11)

In the above, Ohr’s testimony is shown to contradict Schiff’s assertions about when Steel and Ohr first met. Now we have even more evidence that Schiff lied and did so purposely. Notice the first line in the above quoted document. Schiff writes that “The Majority micharacterizes Bruce Ohr’s role, overstates the signficance of his interations with Steele, and misleads about the timeframe of Ohr’s communications with the FBI.”

Was that true? The latest evidence says no.

He also implied Ohr had nothing to do with counterintelligence work

Yeah, neither of those are true

Here is Bruce and his wife Nellie (a Fusion GPS employee) meeting up with Chris Steele in person in DC **a day before the FBI opened its counterintelligence investigation into Trump/Russia** pic.twitter.com/D8kMvmR694 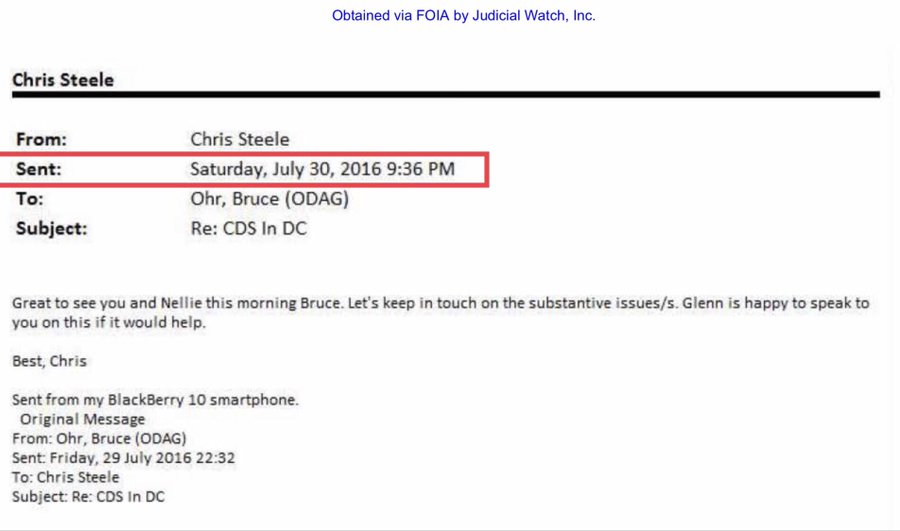 Not only did Ohr contradict Schiff in his testimony (as streiff’s write-up points out) but these new documents show that Ohr met with Steele the day before the counter-intel investigation into Trump was opened. Coincidence? Nobody can seriously believe that. There are also text and call logs showing that Ohr and Steele had numerous, extensive contacts long before Schiff said they did in his memo. Schiff also called their contact “overstated.” Does this appear overstated to you?

I’m sure he didn’t discuss any of that with Ohr, one of DOJ’s top officials, who then immediately spoke to Andy McCabe who authorized opening the investigation

According to @RepAdamSchiff’s memo, FBI HQ didn’t even know about the dossier til Sep 2016

Nothing to see here folks!

And does this volume text messages and phone calls between Ohr and Steele look “overstated”? And these aren’t even the full records! pic.twitter.com/6eFyX8YtZ2

I’ve always felt that Bruce Ohr was the missing link in all this. How he’s escaped the spotlight to this point is beyond my comprehension. Ohr was meeting with Steele before the Trump investigation was opened and he kept meeting with him after the FBI fired Steele in order to keep funneling information back to Andrew McCabe and Co. Ohr’s wife, Nellie, also worked for Fusion GPS at the time and they played a central role in jump starting all of these investigations via their (now discredited) Trump dossier.

What has been proven without a shadow of a doubt at this point is that Rep. Adam Schiff is a liar. There’s no other way to spin this. There are a lot of people, even on the “conservative” side of spectrum, who owe Devin Nunes an apology for savaging him and demanding he step down.

It’s beyond time for Schiff to be held accountable for this. He’s been lying about having evidence of collusion for two years and has now started another sham investigation to continue to push his conspiracy theories. If we had an honest media, these things would be exposed and Schiff would be excoriated for the dishonest actor that he is. Ask yourself why an unverified twitter account is having to take the lead in sharing these documents? Where’s CNN? Where’s The Washington Post? If the shoe were on the other foot, this would be a major scandal. Instead it’s brushed over because their dedication to the anti-Trump narrative overrides everything.

Schiff memo is second only to the Steele dossier in lack of veracity — but worse given he’s the now Chair of the House Intel Cmte, not a foreign agent hired gun of Fusion GPS paid by HRC/DNC. Regardless, we need to investigate the investigators https://t.co/dmDe1fzNpe https://t.co/cxKExTlPLC

(TLB) published this article from RedState with our appreciation for the coverage.

Additional articles about Adam Schiff from The Liberty Beacon