From allowing clerks to fix spoiled ballots to permitting voters to escape ID rules, Wisconsin election officials took actions that were not authorized by legislature.

The Constitution allows only for state legislatures to change the ways elections are conducted, but memos show Wisconsin election supervisors made three substantial changes in 2020 that impact potentially tens of thousands of ballots in a battleground state that Joe Biden won by just 20,000.

The question now is whether those changes  — in particular the instructions allowing clerks to cure ballots with missing information — will open the door for the courts to intervene as President Trump looks to contest ballot practices in multiple battleground states. The Trump campaign is seeking a recount in Wisconsin.

“This is a complication thing about elections like this,” said Derek Muller, a professor of law at the Iowa School of Law and an expert in legal election matters. “I’ve seen it in a lot of jurisdictions, what might be sort of a technical violation of the statute, in this case encouragement to county clerks about how to use their judgment on whether or not to cure a ballot.”

State officials, he said, might have construed the directive as something of a fraud prevention measure, so that election authorities could track down witnesses if need be. The issue of whether or not the election commission violated the law could depend on how the statute is worded and interpreted, he added.

Wisconsin Statute 6.87(6d) stipulates that any ballot “may not be counted” if it is missing the address of the voter’s witness. The Wisconsin Elections Commission in August issued a directive to voters that reaffirmed that statute: “If [the witness signature and address] is missing, your ballot will not be counted,” the directive read.

Then in mid-October, the Wisconsin Elections Commission issued a directive to the state’s county clerks appearing to give them the authority, in contravention of state law, to fix incomplete (or “spoiled”) ballots that are missing witness signatures.

“Please note that the clerk should attempt to resolve any missing witness address information prior to Election Day if possible,” the directive states, “and this can be done through reliable information (personal knowledge, voter registration information, through a phone call with the voter or witness). The witness does not need to appear to add a missing address.”

Retired Wisconsin Supreme Court Justice Michael Gableman, told local radio station 1130 WISN this week that the statute is “very, very clear. If an absentee ballot does not have a witness address on it, it’s not valid. That ballot is not valid.” The Dan O’Donnell Show, meanwhile, claimed that the Wisconsin GOP “estimates that thousands of witness addresses may have been changed.”

Nearly 200,000 Wisconsin residents, meanwhile — and possibly more — may have voted by absentee ballot in the 2020 presidential election while being exempt from state voter ID rules, according to state data.

Wisconsin allows voters to claim an “indefinitely confined” status if they are homebound or otherwise incapable of leaving the house to go vote. In those cases, such voters are permitted to vote with absentee ballots.

The number of indefinitely confined voters in the state skyrocketed this year as citizens remained concerned about catching COVID-19 at polling places. State data show that confined voters this year nearly tripled from about 72,000 in 2019 to 195,000 in the April primaries.

It is not clear how many of those voters remained confined during the presidential election this week, and/or how many more may have registered in between the primaries and the general election. A query to the Wisconsin Elections Commission went unanswered.

The state, meanwhile, largely preempted any control that local authorities might have exercised over confined voters. 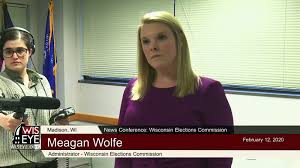 Wisconsin Elections Commission Administrator Meagan Wolfe said in a May memo that municipalities “are not required to contact these voters” to confirm that they remained indefinitely confined. If a confined voter did not respond to a municipality’s inquiry, the municipality was nevertheless still required to send them an absentee ballot “if they returned their April 7 ballot,” Wolfe said in the memo.

Authorities that suspected voters were no longer confined were still mandated to send them absentee ballots, she added.

As the number of confined voters in Wisconsin this year soared, the state also noted that such voters are absolved from a key voter security measure: providing proof of voter ID when submitting a ballot.

On Wisconsin’s voter ID informational website, the state notes: “An indefinitely confined voter does not need to provide a copy of photo ID.”

“Instead, the witness signature on the Absentee Ballot Certificate Envelope satisfies the photo ID requirement,” the site continues, noting that signatures from both the voter and the witness were still required.

The Wisconsin Elections Commission did not respond to queries about both the voter ID provision and the directive to county clerks. Just the News also sought from the commission a full rundown of the number of indefinitely confined voters on the rolls in the state.

Significant attention has been paid to Wisconsin over the past week. Biden was declared the winner of the state a few days after the election, but only by a razor-thin margin of about 20,000 votes.

Earlier in the fall, the Wisconsin Supreme Court heard arguments from a conservative group arguing that around 130,000 voters should be purged from the voter rolls due to their having moved in between elections.

The Wisconsin Institute for Law and Liberty had argued that the Wisconsin Elections Commission was bound by law to remove the voters whose addresses it could not verify. The commission had asked to delay the removal until after the election, citing concerns that some voters might be improperly removed from the rolls.

A circuit court judge had ruled last year that the elections commission was required to remove the tens of thousands of voters that had been targeted for removal. The commission at the time refused to do so, leading to their being held in contempt of court.

In January, an appeals court issued a stay on that ruling, leading eventually to the September hearing by the State Supreme Court. The case was undecided by Election Day.

Mexican president declines to congratulate Biden, will wait for election lawsuits to be resolved

The Making of a Pedophile

Worst Farming Crisis In Modern History Is Upon Us