Senate Judiciary Committee Chairman Chuck Grassley (R-IA) fired off an intriguing letter to Christine Blasey Ford’s attorneys on Tuesday, requesting several pieces of evidence related to her testimony – including all materials from the polygraph test she took, after her ex-boyfriend of six years refuted statements she made under oath last week.

Grassley writes: “The full details of Dr. Ford’s polygraph are particularly important because the Senate Judiciary Committee has received a sworn statement from a longtime boyfriend of Dr. Ford’s, stating that he personally witnessed Dr. Ford coaching a friend on polygraph examinations. When asked under oath in the hearing whether she’d ever given any tips or advice to someone who was planning on taking a polygraph, Dr. Ford replied, “Never.” This statement raises specific concerns about the reliability of her polygraph examination results.”

Whatever the polygraph testimony is about, it seems perfectly obvious that Grassley is right that the notes must be shared. It is wholly unjust for Ford to use them as evidence but refuse to share them with the people who are expected to accept their use as evidence.

Ford’s ex-boyfriend also claims that she never told him about any type of sexual assault in almost a decade of knowing her (of which they were romantically involved for six years).

“During our time dating, Dr. Ford never brought up anything regarding her experience as a victim of sexual assault, harassment, or misconduct. Dr. Ford never mentioned Brett Kavanaugh,” the ex writes, adding “While visiting Ford in Hawaii, we traveled around the Hawaiian islands including one time on a propeller plane. Dr. Ford never indicated a fear of flying.

Ford’s ex goes on to note “Dr. Ford never expressed a fear of closed quarters, tight spaces, or places with only one exit,” further refuting her testimony. “She ended up living in a very small 500 sq. ft. house with one door.” 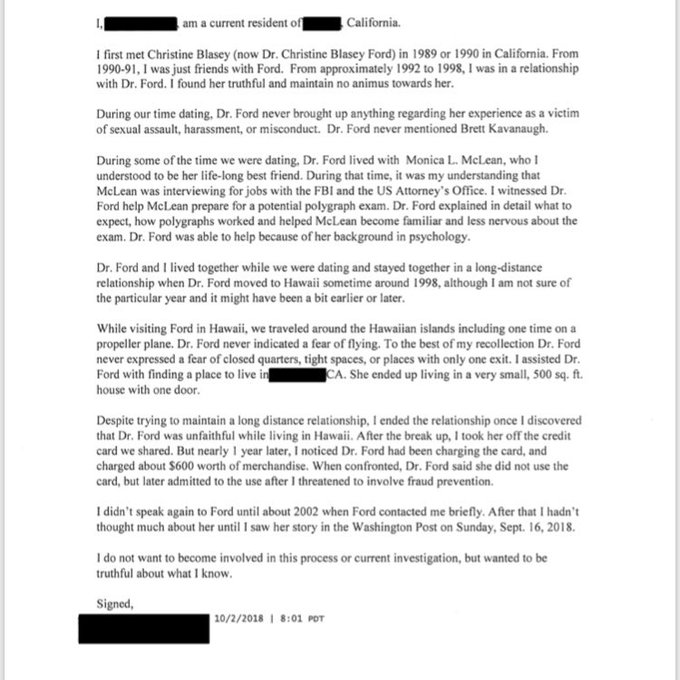 The “second door” story has separately come under scrutiny in recent days, as some have suggested the second door she installed due to “clausterphobia” as well as “anxiety, phobia and PTSD-like symptoms.”

That said – RealClearPolitics‘ Thomas Lipscomb notes that the door may have actually been installed to accomodate a renter at her house.

since 1993, and  through some listings even today, there was another tenant at what is now the Ford property. It is listed as this person’s residence from 1993 to July 2007, a week or so after she sold the house to the Fords.

Her name is Dr. Sylvia Randall, and she listed this address for her California licensed practice of psychotherapy, including couples psychotherapy, until her move to Oregon in 2007.

Currently she only practices in that state, where she also pursues her new career as a talented artist as well.

But many existing directories still have Dr. Randall’s address listed at what is now the Ford residence.

Randall was evasive when Lipscomb called her – refusing to answer whether she sold the house to the Fords or was a therapist to the Fords. Perhaps the FBI needs to interview Randall before they conclude their speedy investigation.

(TLB) published this article from ZeroHedge, as compiled by Tyler Durden, with our sincere thanks for the coverage.

Why is Everyone Leaving CALIFORNIA, and Where Are They Leaving To? [Video]