by Adam Dick | Featured writer at The Ron Paul Institute

Coronavirus crackdowns have been devastating to live music performances. Venues have been shut down. Large gatherings have been banned. Even when venues have been allowed to reopen, they have been subjected to occupancy limits and other restrictions that can prevent profitable operation. Watching a show while wearing a mask and trying to “social distance” can be a drag.

For Morrison, the effort to save live music is about supporting freedom. He explains at his website:

I’m not telling people what to do or think, the government is doing a great job of that already. It’s about freedom of choice, I believe people should have the right to think for themselves.

In addition to speaking out for the return of music venues being able to operate at full capacity, Morrison has been taking actions to save live music including putting on a series of government restrictions compliant concerts where Morrison can challenge the coronavirus mandates in addition to performing his songs. For example, Louis Chilton reported this week at The Independent that Morrison “brought a cardboard cutout of [British] prime minister Boris Johnson holding a coronavirus warning sign on stage during a recent live performance” in London. The mocking action is in response to Johnson’s implementing of a particularly harsh coronavirus crackdown in Great Britain.

Morrison is also in the process of releasing three protest songs challenging government restrictions put in place in the name of countering coronavirus. The first song, “Born to Be Free,” is out already. Profits from the songs, as reported in a BBC article, will be donated to musicians who have suffered financially.

Morrison’s actions related to government mandates imposed in the name of countering coronavirus have been largely focused on trying to save live music. But, he makes clear in a quote in the BBC article that he understands that the harms of the coronavirus crackdowns extend much farther. Morrison states, “Lockdown is taking away people’s jobs and freedoms across all sectors of society.”

Certainly, there are many other musicians who share Morrison’s concerns and aspirations in relation to the coronavirus crackdowns. But, Morrison is unusual among very widely admired musicians in taking such bold and prominent actions in opposition to government mandates imposed in the name of coronavirus. 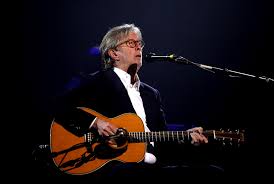 This week came good news that another music icon, Eric Clapton, is supporting Morrison in the effort to save live music. Suzanne McGonagle reported Tuesday at The Irish News:

Now Clapton has voiced his support for Van Morrison’s efforts to find solutions so venues can reopen at full capacity.

“It is deeply upsetting to see how few gigs are going ahead because of the lockdown restrictions,” he said.

“There are many of us who support Van and his endeavours to save live music, he is an inspiration.

“We must stand up and be counted because we need to find a way out of this mess.

“The alternative is not worth thinking about. Live music might never recover.”

May the chorus continue to grow.

(TLB) published this article with permission of the Ron Paul Institute

When Dr. Ron Paul suffered a health scare during his live Liberty Report show, I was perhaps less worried than most of his friends, family, and fans. His remarkable vitality, vigor, and energy are well known to those around him, along with his penchant for exercise, clean living, and light eating. Having known him thirty years, I simply had no recollection of him ever being sick or out of commission. This is a man who had never missed a day of work or an event, at least in my memory. In my mind he was simply always there, a fixed feature of life. So my immediate reaction was to think he would be fine.

As it turns out, he is fine. Even unstoppable. ~Jeff Deist

They’re Worried About The Spread Of Information, Not Disinformation