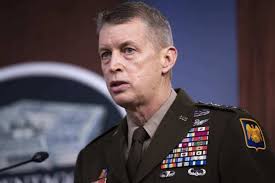 “The official internal memo that we’ve obtained reveals that the National Guard’s top general disagrees with the Pentagon’s decision to keep those 2,300 National Guard troops here at the Capitol,” Turner said.

Turner also reported the National Guard chief did not believe the Guard was “actually equipped to carry out this mission”:

The National Guard chief is laying out really what’s his whole case in this memo, saying that the Guard is already overstretched, and he doesn’t think that they’re actually equipped to carry out this mission. Now despite this, Defense Secretary General Austin overrode the National Guard’s recommendation and extended the D.C. mission anyway.

The report cited Hokanson’s memo, which reportedly said, “Efforts to date have not secured enough volunteers among supporting states to meet the [U.S. Capitol Police’s] request of 2,280 soldiers, nor Option B of 1,000 soldiers.”

“I am concerned that the continued indefinite nature of this requirement may also impede our ability to man future missions,” the memo continued.

Turner reported the memo circulated within the White House at the National Security Council last week.

Tulsi Gabbard Blasts Joe Biden: ‘He Has Betrayed Us All’ [Video]