How can organic farmers survive?

What does the US Environmental Protection Agency do when it has to save face over the claim that “glyphosate is completely safe” when even the World Health Organization admits what many have known all along – that Roundup/glyphosate probably causes cancer? The EPA will simply place the blame on farmers.

That’s right, you suspected all along about cancer, but what about those 32 species of Roundup-resistant weeds that have cropped up all over the US? Farmers will now be required by the EPA to take part in stewardship programs similar to those already imposed on Agent Orange corn and soy being released this year. It seems like a good thing at first glance, but the EPA stewardship programs are a total scam, and farmers should watch their backs.

The agency’s “refuge” requirements (farmers who plant crops with Bt traits must also plant a block or strip of crops without the Bt gene, which is called a refuge) for Bt-expressing crops, for example, are set at too small a percentage and aren’t enforced. They are therefore widely disobeyed, even by those with inadequate acreages. 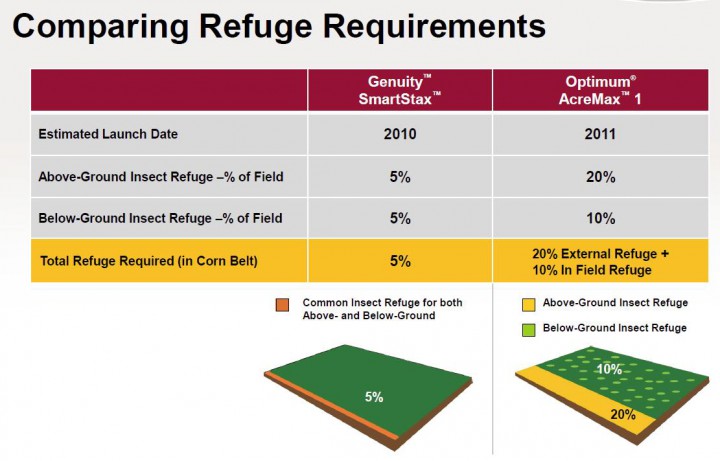 But the idea of the refuges lets the EPA pretend to have a policy in place to prevent the development of Bt-resistant superbugs. It is a bit ridiculous when we know that has already happened. Bt corn already accounts for about 65% of all corn grown in the US – what ‘refuge’ is there?

Even the Wall Street Journal has admitted that:

“ . . . Monsanto Bt Corn (GE spliced with Bacillus thuringiensis DNA which provides an in-plant pesticide on rootworms and caterpillars)… has FAILED and the corn plants have lost pest resistance in the WORST way: the rootworms, earworms, and caterpillars in subsequent generations have developed a mutant strain RESISTANT to Bacillus thuringiensis which had never yet occurred before Monsanto splicing the Bt into Corn genes and upon consumption passing on a Bt resistant strain in subsequent generation.”

When these Bt resistant superbugs take over and no antibiotic can touch them – guess who Monsanto and their government lackeys will blame? The farmers. They’ll say they didn’t honor the ‘refuge’ policy which was never meant to be honored. How can you have a refuge for non-GM Bt corn when more than half of the entire country is already planted with it!? Have they heard of cross-pollination? Have they heard of terminator seeds?

Ironically, Monsanto and the corporate media scapegoat farmers for using “too much Roundup,” which is an absurd accusation when Monsanto makes “Round Up Ready” crops. That’s no different than a crack dealer getting upset that his clients use too much crack. Circular logic? Yes.

Farmers only use the amount of Roundup urged upon them by Monsanto and the USDA – told from the beginning that it was safe. Sure, we should have known better when a company known for making war chemicals was going to be in charge of our food supply, but nonetheless, farmers beware. Those super bugs that cause all manner of disease – they’ll be your fault – not Monsanto’s fault. Not the fault of the US government for allowing them in the first place.

They also lied about the way pesticide use (GMOs really increase it) or yields (GMOs yield less than non-GM) has increased with GM crops. The USDA has also been accused of harassing staff researchers who perform science that leads to results contrary to biotech corporate interests and formerly touted propaganda.

PEER-reviewed briefs cite the effects of glyphosate and neonicotinoids as areas where honest research is especially subject to persecution. The USDA denies the charge, and claims its existing complaint and review procedure is adequate, though the numbers it gives are self-refuting.

The EPA’s stewardship programs are a total joke. Try removing GM food from over 80% of arable land in the US, and then we can see progress.

About Christina Sarich:
Christina Sarich is a humanitarian and freelance writer helping you to Wake up Your Sleepy Little Head, and See the Big Picture. Her blog is Yoga for the New World. Her latest book is Pharma Sutra: Healing the Body And Mind Through the Art of Yoga.