All hell is breaking loose in Washington D.C. after a four-page memo detailing extensive FISA court abuse was made available to the entire House of Representatives Thursday. The contents of the memo are so explosive, says Journalist Sara Carter, that it could lead to the removal of senior officials in the FBI and the Department of Justice and the end of Robert Mueller’s special counsel investigation.

These sources say the report is “explosive,” stating they would not be surprised if it leads to the end of Robert Mueller’s Special Counsel investigation into President Trump and his associates. –Sara Carter

A source close to the matter tells Fox News that “the memo details the Intelligence Committee’s oversight work for the FBI and Justice, including the controversy over unmasking and FISA surveillance.” An educated guess by anyone who’s been paying attention for the last year leads to the obvious conclusion that the report reveals extensive abuse of power and highly illegal collusion between the Obama administration, the FBI, the DOJ and the Clinton Campaign against Donald Trump and his team during and after the 2016 presidential election.

Lawmakers who have seen the memo are calling for its immediate release, while the phrases “explosive,” “shocking,” “troubling,” and “alarming” have all been used in all sincerity. One congressman even likened the report’s details to KGB activity in Russia. “It is so alarming the American people have to see this,” Ohio Rep. Jim Jordan told Fox News. “It’s troubling. It is shocking,” North Carolina Rep. Mark Meadows said. “Part of me wishes that I didn’t read it because I don’t want to believe that those kinds of things could be happening in this country that I call home and love so much.”

Rep. Peter King, R-N.Y., offered the motion on Thursday to make the Republican majority-authored report available to the members.

“The document shows a troubling course of conduct and we need to make the document available, so the public can see it,” said a senior government official, who spoke on condition of anonymity due to the sensitivity of the document. “Once the public sees it, we can hold the people involved accountable in a number of ways.”

The government official said that after reading the document “some of these people should no longer be in the government.” –Sara Carter 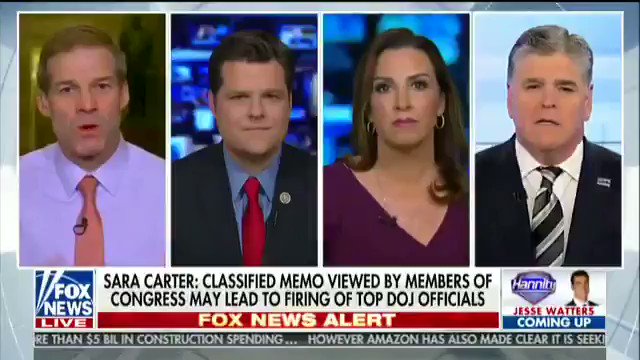 Florida Rep. Matt Gaetz (R) echoed Sara Carter’s sentiment that people might lose their job if the memo is released:

Meanwhile, Rep. Matt Gatetz (R-FL) said not only will the release of this memo result in DOJ firing, but “people will go to jail.”

Former Secret Service agent Dan Bongino says “Take it to the bank, the FBI/FISA docs are devastating for the Dems.”

My sincere apologies for the expletive but SHIT IS ABOUT TO HIT THE FAN.
The former Obama administration’s going to have a lot of explaining to do. #Obamagate

The dossier was used in part as evidence for a warrant to surveil members of the Trump campaign,according to a story published this month. Former British spy Christopher Steele, who compiled the dossier in 2016, was hired by embattled research firm Fusion GPS. The firm’s founder is Glenn Simpson, a former Wall Street Journal reporter who has already testified before Congress in relation to the dossier. In October, The Washington Post revealed for the first time that it was the Hillary Clinton campaign and the DNC that financed Fusion GPS.

Congressional members are hopeful that the classified information will be declassified and released to the public.

“We probably will get this stuff released by the end of the month,” stated a congressional member, who asked not to be named. –Sara Carter

Releasing the memo to the public would require a committee vote, a source told Fox, adding that if approved, it could be released as long as there are no objections from the White House within five days.

Reactions from the citizenry have been on point: 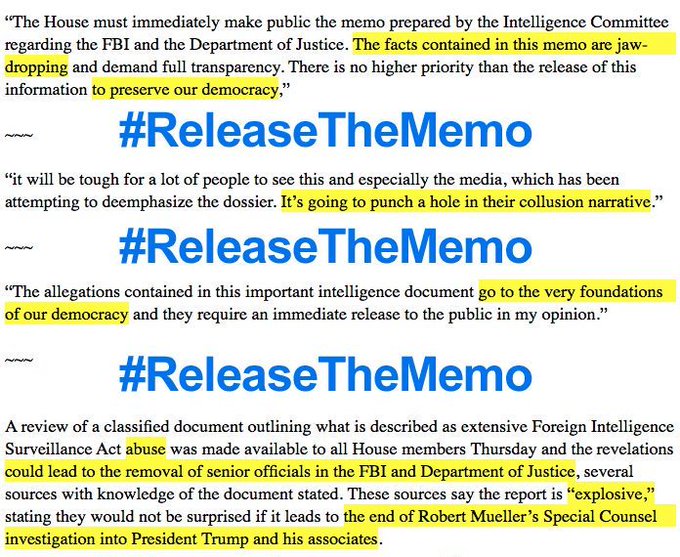 The swamp runs deep and it is about to be EXPOSED. #ReleasetheMemo #Obamagate

***
Even WikiLeaks has joined the fray, offering a reward in Bitcoin to anyone who will share the memo: 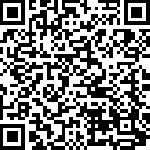 #ReleaseTheMemo: Do you know someone who has access to the FISA abuse memo? Send them here: https://wikileaks.org/#submit

WikiLeaks will match reward funds up to $1m sent to this unique Bitcoin address: 3Q2KXS8WYT6dvr91bM2RjvBHqMyx9CbPMN
or marked ‘memo2018’: https://wikileaks.org/donate

Of all the recent developments in the ongoing investigation(s), this one is on the cusp of turning into a genuine happening.
*********
Source
TLB published this report by Tyler Durden from ZeroHedge with our sincere appreciation for the coverage of this pertinent subject.