The New York Times‘ newest editorial board member, Sarah Jeong, was outed as a bigot yesterday after dozens of tweets from less than four years ago were unearthed, revealing extreme hatred of white people.

The Times, in response, claimed to have known about the tweets – and said they were simply Jeong imitating racists.

“Her journalism and the fact that she is a young Asian woman have made her a subject of frequent online harassment. For a period of time she responded to that harassment by imitating the rhetoric of her harassers.” -NYT

Except this was quickly dispelled after several tweets of Jeong’s in which she drops casual bigotry such as “fuck white women” out of the blue were caught by other Twitter users.

The NYT claimed that Jeong was “imitating” the behavior of people who harassed her online, but this does not explain why she was tweeting “fuck the police” and encouraging people to “kill all men.”

A search for “cops” and “police” on Jeong’s Twitter reveals an extensive history of anti-cop sentiment and a lack of sympathy for police who are injured on the job.

In one tweet from 2014 she wrote, “let me know when a cop gets killed by a rock or molotov cocktail or a stray shard of glass from a precious precious window.”

“If we’re talking big sweeping bans on shit that kills people, why don’t we ever ever ever ever talk about banning the police?” a tweet from 2016 asserts. –Daily Caller 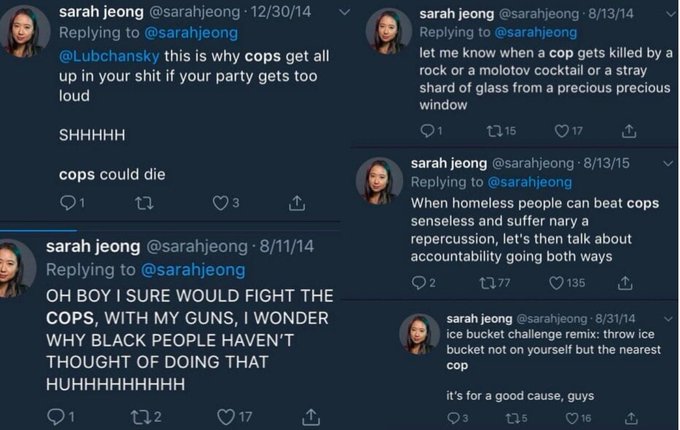 Jeong also fantasized about killing men, joking that even if only “bad men” were killed, it would still include all men.

It all makes perfect sense, right?

Media: “Trump voters are white racists and Nazis and racism is why Trump won.”

NYT: “Racism is fine if you’re crapping on white people.”

The @nytimes is proud to introduce you to their newest editor! She’s tweeted about how much she hates White People, Police, Republicans and Men. We should thank the @nytimes for finally saying the quiet part loud and endorsing the insanity that many of them believe in private.

As Breitbart‘s Allum Bokhari noted on Friday, Jeong also has a history of trashing her new employer and several NYT columnists!

You know what IS good? That someone is FINALLY suing the New York Times for libel

After a bad day, some people come home and kick the furniture. I get on the internet and make fun of the New York Times.

Of course, the MSM is already starting to cover for Jeong – as evidenced by journalist Tim Pool‘s observation that the BBC “stealth edited” an article to change the word “racist” to “inflammatory” without noting the update: 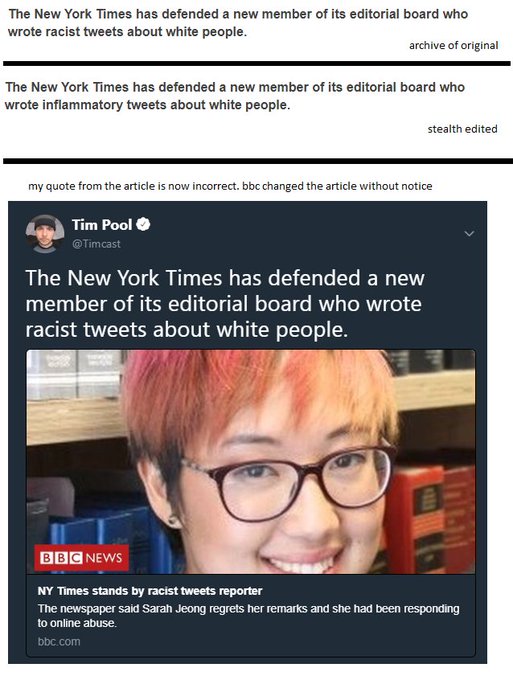 Stealth editing is beyond unethical. Too many large news organizations do it.

The BBC, by altering the article without notice, makes my quoting of them seem like I’m editorializing.

Did you know most large news organizations do this? http://Newsdiffs.org

Nothing to see here folks, just the NYT hiring and then defending a bigot who openly hates white people, men and cops. Of course, the Times also said of ABC’s decision to cancel Roseanne: “The network’s decision to cancel “Roseanne” over a racist comment will cost it. But when people decide to let racism slide, it costs the rest of us.”

Unless it’s one of their own…

(TLB) published this article from ZeroHedge with our thanks to Tyler Durden  for the coverage and availability.

The Lesson Of 2020: What’s The Point Of Pointing Out The Hypocrisy? [Video]