“North American governments have shown the ‘fortitude’ necessary to kill indigenous people often enough that this is no idle threat,” warns Bill McKibben.

Protesters at a rally in Vancouver to show opposition to the Trans Mountain pipeline on September 9th, 2017. (Photo: William Chen/flickr/cc)

As Canada’s controversial Trans Mountain pipeline expansion project faces ongoing opposition, the former governor of the Bank of Canada said that protesters may die but that the government should push the project through anyway.

Speaking at an event Wednesday,  David Dodge said, “We’re going to have some very unpleasant circumstances,” the Edmonton Journal reported. “There are some people that are going to die in protesting construction of this pipeline. We have to understand that.”

“Nevertheless, we have to be willing to enforce the law once it’s there,” Dodge said. “It’s going to take some fortitude to stand up.”

In an interview with the Journal, he elaborated by saying, “We have seen it other places, that equivalent of religious zeal leading to flouting of the law in a way that could lead to death.”

Author and 350-org co-founder Bill McKibben warned, “North American governments have shown the ‘fortitude’ necessary to kill indigenous people often enough that this is no idle threat,” while Canandian author Naomi Klein called the threat a “disgrace.” She added, “If the worst happens, we now know they went into this with their eyes wide open.”

North American governments have shown the “fortitude” necessary to kill indigenous people often enough that this is no idle threat.

Former governor of the Bank of Canada says people “are doing to die” defending their land against the Kinder Morgan pipeline expansion but Trudeau needs to be strong and build it anyway. If the worst happens, we now know they went into this with their eyes wide open. A disgrace. https://twitter.com/MikeHudema/status/1007353571766099971 … 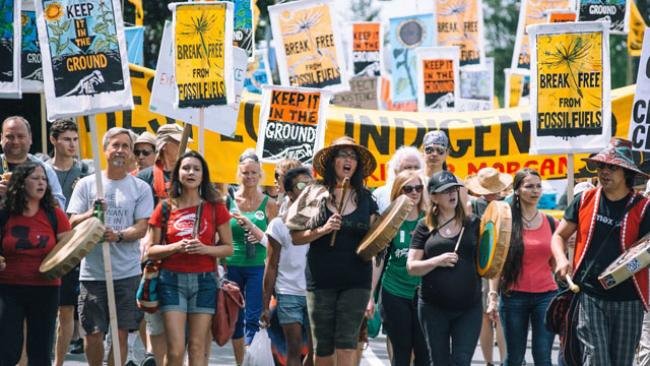 Is Prime Minister @JustinTrudeau going to condemn these comments from former Bank of Canada governor basically saying – ‘We need this pipeline. If people need to die because of it. Well so be it that’s the cost of doing business.’https://buff.ly/2JLcxmH #cdnpoli#bcpoli

Trudeau was the target of sharp criticism from environmental advocacy groups after announcing last month that the government would purchase the pipeline and expansion system, which will roughly triple the system’s capacity. That $4.5 billion buyout, commented the B.C.-based Dogwood Initiative, makes every taxpayer “partial owner of a leaky 65-year-old pipeline—and the proponent of a still uncosted oil tanker expansion project.”

Dodge, for his part, has been described as “not inclined to hold his tongue.”

His comments about the pipeline protesters come days after he accused climate activists of making it harder to enact policies to reduce greenhouse gas emissions and said Canada should “sell our hydrocarbons, which we produce, to foreigners at the highest possible market price….including the sale of bitumen from the oilsands, while demand for oil is robust and still growing.”

(TLB) published this article from Common Dreams. This work is licensed under a Creative Commons Attribution-Share Alike 3.0 License

Israeli Gov’t Just Condoned the Slaughter of Men, Women and Children by Calling Them ‘Nazis’