Retired generals who denounced Trump could be recalled to active duty and prosecuted, experts say

The Uniform Code of Military Justice prohibits using “contemptuous words” against the president.

“As part of the UCMJ, governing military law, you cannot use contemptuous words against certain officials, including the president,” one active duty Army Judge Advocate General Corps officer said. “That is a court-martial offense, and yes, you can be recalled to active duty to be court-martialed.”

The outspoken retired officers know they could be held to account, the JAG officer said.

“I don’t know who the hell they think they are,” Dowd said. “It’s stunning to me. I guess the law doesn’t apply to them.”

With increasing frequency over the past couple years, and in quick succession over the past week, they have leveled serious accusations against Trump, and have called for him to be removed from office.

In late 2019, McRaven published a New York Times op-ed titled “Our Republic Is Under Attack From the President,” and later told CNN interviewer Jake Tapper that Trump is working to destroy the country. 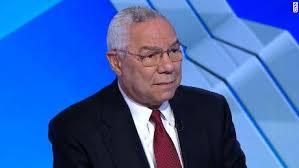 On June 7, former Chairman of the Joint Chiefs of Staff Gen. Colin Powell (Pictured) — also speaking to CNN’s Tapper — said that Trump has “drifted away” from the U.S. Constitution. Elsewhere, Powell said Trump “lies all the time,” and called him a “menace.”

Retired Lt. Gen. John Allen, who commanded U.S. forces in Afghanistan, said in an interview that the Constitution is under threat — not from violent anarchists, but from the president of the United States.

Retired Gen. Barry McCaffrey, who led U.S. Southern Command and served in Bill Clinton’s cabinet, denounced Trump as a threat to national security. Former Chairman of the Joint Chiefs, Adm. Mike Mullen — who in 2012 surrendered his computers to the FBI in the course of a cybersecurity investigation — accused Trump of giving succor to foreign detractors.

“We are witnessing the consequences of three years without mature leadership,” Mattis wrote about Trump in The Atlantic. “We can unite without him, drawing on the strengths inherent in our civil society,” he said, adding Trump made a mockery of the Constitution.

Amid publicity surrounding the comments, the retired officers rallied around one another, giving virtual salutes and fist-bumps.

McCaffrey posted on social media his support of Powell and Mattis. He tweeted a Tik Tok video mocking Trump, and made fun of Mattis critic Sebastian Gorka, calling him “a childish fraud.”

Members of the military community who are not retired four stars questioned the chorus of denunciation.

“The sudden rush by retired flag officers to come out and declare the commander-in-chief to be the greatest threat to our Constitution, is nothing short of abhorrent,” Army veteran Chad Longell told Just the News. “While rioters loot and burn the country, while anarchists attempt to take over an American city, and while many are now calling for the abolition of entire police departments, these leaders think the president’s style is the greatest threat to our country?”

In an open letter published online, one former Marine Corps officer called “Mad Dog” to task. “Who do you think you are to speak out in such a disgraceful manner against a sitting president?” wrote retired Col. Jim Bathurst. “Do you believe your rank entitles you to talk such trash?”

One active duty enlisted soldier and combat veteran said he is deeply disappointed by the retired flag officers’ comments.

“I thought our leaders are supposed to be neutral,” the soldier said. “They are acting like political partisans. That, and the level of groupthink mob mentality, shakes me to my core.”

Said Longell, who served tours in Iraq and Afghanistan: “What world are they living in?”

Retired and active duty military questioned why the vocal four-star officers previously remained silent on issues and policies that sent American troops to their deaths.

“Where were they during the Obama administration, when the rules of engagement (ROE) were getting American soldiers killed?” demanded retired Infantry officer and combat veteran Jim Lechner, a history professor. “The administration imposed an unworkable strategy and ROEs that were criminal. Why didn’t these flag officers speak up about that?”

In 2015, when asked directly by this reporter about the rules of engagement and whether they endangered American lives downrange, McRaven declined to answer.

In his own open letter, Dowd asked Mattis why he did not stop one notorious enemy.

“Perhaps you ought to explain how and why you (and John Allen), as [Commanding General] Central Command, did not engage and take out Iranian Major General Soleimani who roamed the Middle East and wreaked havoc and death of American boys with his infamous IEDs,” wrote Dowd.

Dowd said that he received a response from Mattis, and that their exchange — which he did not share — was “pleasant.”

The retired flag officers have been praised by supporters who believe their comments are warranted and helpful. And, while the criticisms of Trump could bring consequences via the military justice system, charges likely will not be filed, the JAG officer said.

“Could they be recalled to active duty and prosecuted? Yes,” the officer said. “Will they be? Highly unlikely.”

The effects of their words, though, ripple through the ranks.

“The only people who are politicizing the military are the flag officers who are telling our current service members that their commander-in-chief is the greatest threat to our republic,” Longell said. “I can barely think of anything as dangerous to our nation [as] to inject such a thesis as that into the already highly volatile chapter of our history we are in.”

Longell and three other active duty soldiers who spoke to Just the News report wanting neutrality and unity from senior leaders, including those who are retired.

Said Longell: “As a veteran who has tremendous respect for many of these leaders, it is with a painful feeling of disbelief and disappointment that I watch them now become tools of the very dangerous flames of political opportunism which threaten our great republic.”

1 Comment on Generals who denounced POTUS could be recalled & prosecuted