President Trump’s unilateral decision to declare Jerusalem as Israel’s capital earned him worldwide criticism and condemnation, except for Israel. Benjamin Netanyahu‘s so-called charm offensive in Brussels, where he wanted to convince the EU to follow Trump’s example, was shunted by Federica Mogherini, the EU’s foreign policy chief, saying that “this move will not come.” She stressed the support of the EU for a two-state solution with Jerusalem as the capital of both states.

By the way, Netanyahu was not invited by the EU but asked himself to read the EU the riot act. Instead of kicking him out, the EU representatives endured him and became prominent and firm after he left the stage. The EU Community, which tries to act as a global player, would have shown such a political rascal the door. Instead, they got insulted by Netanyahu and took it with a smile.

There have been widespread demonstrations all across the Muslim world, especially in occupied Palestine. Demonstrators also went onto the streets in Lebanon, Turkey, Morocco, Sweden, and Berlin, protesting before US Embassies shouting anti-American and anti-Israeli slogans.

Turkish President Erdogan uttered harsh criticism about Trump’s decision and Israel in particular, calling Israel a “terrorist state” and a “killer of children,” slamming the Zionist regime as an “oppressive, occupation state.” And the US is a “partner in bloodshed” in the Middle East, so said Erdogan. At a meeting of the Arab League in Cairo, Lebanon’s foreign minister Gebran Bassil, a Maronite Christian, called for sanctions against the US.

In Berlin, two thousand demonstrators gathered at the Brandenburg Gate close to the US Embassy, shouting anti-Israeli slogans and burning a self-made Israeli flag. This childish symbolism originated out of frustration, anger, lack of power and despair, created a hype among German politicians who branded it an act of “anti-Semitism.” One can ask why the demonstrators didn’t burn the American flag too, which would have made much more sense. The burning of flags is not a crime and falls under the right to demonstrate, as long as it’s not physically attached to a foreign embassy, which is considered a crime in Germany.

Where criticism of Israel’s criminal behavior is concerned, the exercise of freedom of speech is in great danger. Among German politicians and the fawning media, the anti-Semitism-club is always at hand to make critics silence or stigmatize any Israel critics as “anti-Semites.” It still works, although we are living in the 21st century and not in the Middle Ages. With reference to Karl Marx one can say; a ghost is going around in Germany, the specter of anti-Semitism!

Unanimously, the German political class condemned the burning of the Israeli flag as a form of “anti-Semitism and xenophobia”, how Chancellor Merkel called it. Interior Minister Thomas de Mazière stated:

“We don’t accept it when Jews or the state of Israel are disgraced in this way.”

Germany is “bound in a special way to the state of Israel and people of Jewish belief.”

And Foreign Minister Sigmar Gabriel said that despite understandable criticism of Trump’s decision,

“there is no right and also no justification to burn Israeli flags, incite hatred against Jews or question the right of Israel to exist.”

Not enough of this political nonsense, Gabriel claimed that such acts do not only oppose Israel but also “the constitutional order of Germany.” None of the demonstrators denied Israel’s right to exist and nobody called the “constitutional order” into question, Mr. Gabriel. Perhaps the Foreign Minister doesn’t understand democracy. 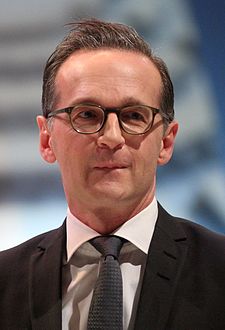 Justice and “Censorship” Minister Heiko Maas was in on it declaring

Rightly so, but there has been no anti-Semitism at the Berlin rally only criticism against the Israeli occupier and its ally the US. Jens Spahn, a politician from Merkel’s CDU, wrote on Twitter:

“We have been looking at imported anti-Semitism for too long out of the misreading of misunderstood tolerance.”

One could continue this kind of political rhetoric for pages without any gain in knowledge.

The President of the Central Council of Jews in German, Josef Schuster, also added his two cents to it. According to him, the burning of the self-designed Israel flag was pure Anti-Semitism and a threat to Israel’s existence. Schuster never criticized Israel’s brutal occupation and the mistreatment of the Palestinian people. Not only the Central Council of Jews but also other Jewish functionaries are fighting tooth and nail against criticism of Israel. Even Jewish critics of Israel such as the editor-in-chief of the online magazine “the Semit,” Abraham Melzer, was slandered by the chairperson of the Jewish community in Munich, Charlotte Knobloch, as a “notorious anti-Semite.” A court in Munich has forbidden her this slander, but Knobloch appealed the judgment.

The tenor of many articles was a kind of anti-Semitism that came with the refugees from the Arab world, although it was stressed that there is a latent anti-Semitism in Germany of about 20 percent among the population. It should come as a surprise to no one that all the headlines linked the demonstrations to “Anti-Semitism.” On a regular basis, many of the anti-Semitic “scandals” are initiated by infamous Jewish journalists. Too often, the press jumps on their bandwagon and the slander of innocents take its course.

The reaction of the political class is pure hypocrisy and ingratiation to Israel. The politicians kept mum when Israel committed war crimes against the population of the Gaza Strip killing several thousands. No word against illegal settlements, house demolitions, land theft, random killings, settler inflicted terror, demolitions of institutions financed by the EU et cetera. Across-the-board, the German political class has no empathy for the oppressed Palestinians but only for the Zionist oppressor.

Catalonia finally did it, and Madrid responds decisively

A Look Inside the “Et Tu Brute” White House Coup