Update II: A US judge with the US District Court of Columbia has heeded the prosecution’s request and ordered Butina be held without bail. During the hearing, prosecutors showed a photo of Butina meeting an alleged Russian intelligence agent, according to Reuters.

Here’s more from the hearing:

The 29-year-old former American University graduate student wore an orange prison jumpsuit and showed no emotion as her lawyer entered a not-guilty plea.

She has been accused of working with a high-powered Russian official and two unidentified U.S. citizens, trying to infiltrate a pro-gun rights organization in the United States and influence the United States’ foreign policy toward Russia.

The gun rights group was not identified. However, her social media accounts show she attended many National Rifle Association events and met with many top officials of the lobbying group.

Her attorney, Robert Driscoll, has said she is not a Russian agent and poses no flight risk, after she was arrested on Sunday without warning.

In a statement to reporters after the hearing, Driscoll said Butina wanted to send love to her parents and tell them she was OK. “While we respect the court, we strongly disagree that there were no conditions of release short of incarceration to detain an innocent student before trial,” he said.

#Zakharova: We are dismayed by the reported arrest of Russian citizen Maria Butina in the US on July 15. According to a statement on the website of the US Justice Department, she is charged with conspiracy to act as an agent of Russia without prior notification

“It looks as if the FBI, instead of carrying out their responsibility of fighting crime, is implementing a political put-up job set to it by forces that are whipping up anti-Russia hysteria in the US.”

Another interesting twist in the investigation of Maria Butina, the alleged Russian spy who tried to infiltrate the NRA and tried to arrange meetings between then-candidate Trump and Russian President Putin, has just been revealed in a new filing by the DOJ in its case against Butina, who is presently sitting in federal custody as she battles to be freed on bail.

According to a new court filing, investigators found a handwritten note in her apartment that included details about a job offer from the FSB, and allegations that she was in contact with senior Russian intelligence officials.

Because, apparently unlike every other spy agency in the world, the GRU is the only one known to recruit idiots and to advise its agent to specifically leave incriminating evidence in handwritten notes behind so it can be conveniently discovered by, well, anyone.

Perhaps unsurprisingly given the immense resources at her disposal, Butina has been considered “an extreme flight risk” and prosecutors have asked the judge that she be held through trial.

To help facilitate her cover, Butina had a “personal relationship” with an unnamed 56-year-old American citizen with whom she lived. The individual was identified only as “Person 1”. 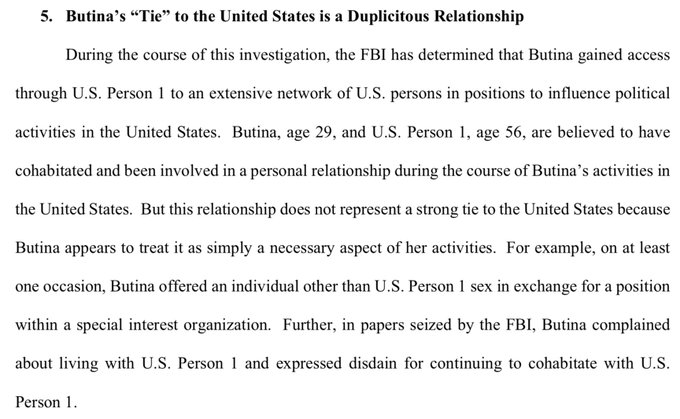 The government’s argument to keep Maria Butina in pretrial detention includes this section.

And despite this, Butina also offered sex to an unnamed official in a “special interest organization” that she wished to join. The filing also alleges that Alexander Torshin,  a Russian who has had personal contact with members of the Trump family, was Butina’s boss.

Reports of her arrest were initially met with incredulity and confusion while the press largely continued to focus on President Trump’s performance at the Helsinki summit. But this new information is extremely titillating.

Indeed, the story of Butina (who was compared in the indictment to another infamous Russian spy, Anna Chapman) now has many lurid elements: beautiful Russian spies, sex, high-ranking political connections (photos purporting to show Butina in the Oval Office have surfaced on twitter).

Which is why we imagine the press will be paying close attention to her first court appearance, set for Wednesday afternoon at 1:30 pm ET.

(TLB) published this article from ZeroHedge with our thanks.