I have no doubt that Greta Thunberg believes with all her heart that human use of fossil fuels is destroying the planet.  But she is being played by the wealthy and powerful people who spoon-feed the world’s children with only one side of the contested debate over climate change. And of those wealthy celebrities who preach the loudest about the need for “each and every one of us” to dramatically cut back on using fossil fuels, not a single one practices what they preach.
. 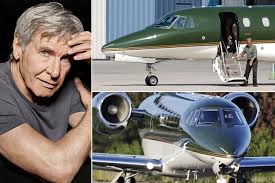 Harrison Ford is one of Hollywood’s most famous climate crusaders. He owns multiple extravagant homes, plus a reported 12 private planes, nine motorcycles and six gasoline-powered  automobiles.  His private plane collection includes two gas-guzzling corporate jets. Even though his opulent lifestyle depends upon copious amounts of fossil fuel energy, he speaks forcefully about his commitment to fight climate change.
.

One reason Hollywood stars are used to promote various causes is because actors are trained to project emotions they don’t actually feel.  In one of the most convincing performances of his award-winning career, Ford concluded his speech at the 2019 Global Climate Action Summit with this zinger:

We all suffer the effects of climate change. So, let’s turn off our phones, let’s roll up our sleeves, and let’s kick this monster’s ass!

At the beginning of his performance, and with his professional talents on full display, the Hollywood icon angrily barked this out:

Okay, but what about people who say they believe in climate science to shield themselves from criticism for consuming unconscionable amounts of fossil fuel energy?  If Ford really believes in the hotly disputed science that props up man-made global warming theory, he certainly doesn’t act like it.  In a video to promote the 2019 World Government Summit in Dubai, the motion picture megastar said this:

It’s up to you and me to act now to face the greatest moral crisis of our time.

Moral crisis? Act now?  Fair enough.  So what’s he doing, on a personal level, to “act now”?  Other than lecturing his moral lessers, absolutely nothing.  His multiple real-estate holdings include a 14,000 sq. ft. megamansion in the heart of one of the most exclusive areas of Los Angeles.  He also owns a magnificent Jackson Hole, Wyoming estate, the plans for which he sketched out in Paris while working on a film with fugitive child rapist, Roman Polanski.  Unfortunately for the planet, his excessive use of fossil-fuel energy isn’t limited to when he’s on the ground — he flies all over the world at the drop of a hat in CO2-spewing private jets.

An outspoken supporter of stratospheric carbon taxes that would prevent ordinary Americans from taking a commercial flight to go on a family vacation, this paragon of environmental virtue rewards himself by flying as often as he wants and for any purpose he wants, the planet be damned.  As reported by Breitbart, he boasted this:

Flying is like good music; it elevates the spirit and it’s an exhilarating freedom. I’m so passionate about flying I often fly up the coast for a cheeseburger.

Wealthy climate preachers are flying all over the world, going anywhere that suits their fancy, including for trivial purposes like getting themselves a cheeseburger.

As evidenced by their elephantine carbon footprints, these high-flying climate preachers are not the least bit concerned that CO2 emissions are harming the planet.  A new study by researchers at Sweden’s Lund University found that most wealthy climate celebrities are doing nothing to change their insatiable flying habits, with some responsible for a thousand times more CO2 emissions that the average person.

The adults who have purposely terrified children around the world have bent over backwards to keep an inconvenient fact hidden from them.  A senior UN climate official named Dr. Ottmar Edenhofer admitted the following during a Nov. 14, 2010 interview with Swiss newspaper Neue Zürcher Zeitung:

[UN] climate policy has almost nothing to do anymore with protecting the environment.

High-profile climate preachers never mention this stunning admission that the UN’s public stance on global warming is essentially a hoax.

Wealthy hypocrites who preach do as we say, not as we do are playing the world’s children, including Greta Thunberg, like a fiddle.

(TLB) published this article from American Thinker with our appreciation for this perspective.

(TLB) added/edited pictorial and video content to this article

About the writer John Eidson. He is an electrical engineering graduate of Georgia Tech and now retired. John is a freelance writer based in Atlanta. American Thinker recently published a related article of his titled The Cynical Plot behind Global Warming Hysteria.

More about Global Warming from The Liberty Beacon

Not In My Name: Academics Publicly Attacking UN Torture Rapporteur

Big Win for Trump Wed Night from The Supreme Court