In Drastic Reversal, Trump Orders Full With-drawal From Syria After “Victory Over ISIS”

(ZeroHedge)  A troop withdrawal appears already underway [in Syria] after a Pentagon official said it would happen “quickly”.

White House spokesperson Sarah Sanders has issued a formal statement on troop withdrawal from Syria: “We have started returning United States troops home as we transition to the next phase of this campaign.”

Moments after President Trump confirmed reports of US pullout via Twitter saying “We have defeated ISIS in Syria,” Pentagon officials said the president “ordered full US troop withdrawal from Syria,” and that this will be “rapid” — apparently already beginning, per a Reuters breaking report: “All U.S. State Department personnel are being evacuated from Syria within 24 hours – official.” 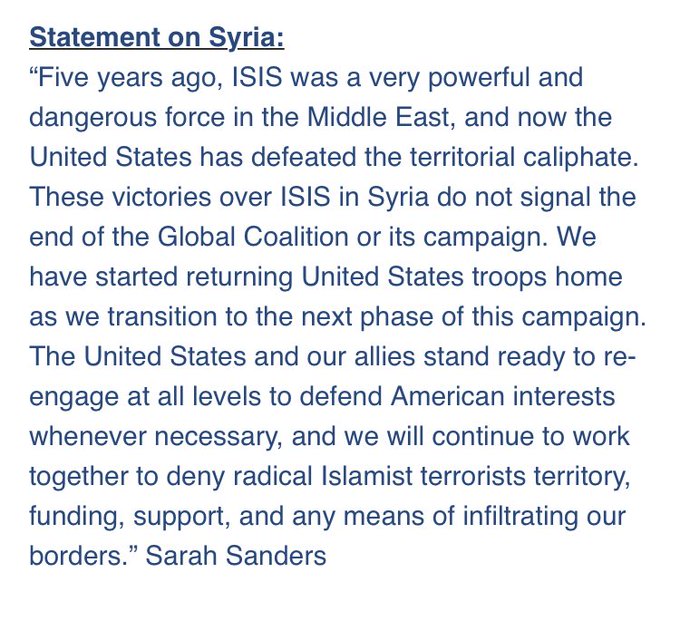 Sarah Sanders: “We have started returning United States troops home as we transition to the next phase of this campaign…”

Meanwhile Israel’s ambassador to the U.N. has vowed to continue combating Iran in Syria if US forces leave. Russia has alternately said “Syria will stabilize” should the thousands of American troops stationed there exit.
***

The WSJ notes the complete 180 reversal in policy, which just days ago was reiterated by officials as an “indefinite” American presence in Syria in order to “counter Iran” while bolstering Kurdish and Arab SDF forces in the East (the YPG-dominated Syrian Democratic Forces), comes following a phone call last week between President Trump and Turkish President Recep Tayyip Erdogan.

For the past week Erdogan has threatened to launch a full-scale cross border assault on US-backed Kurdish forces in Syria, which Turkey has long considered an terrorist extension of the outlawed PKK. This would potentially bring American troops and advisers under fire, who’ve found themselves in the awkward position since entering Syria of training Syrian Kurdish militias on the one hand, and coordinating broadly with a NATO ally on the other.

Perhaps Trump finally took full stock of the fact that the prior planned “indefinite” presence of some 4000 American troops was recipe for a quagmire sure to be Washington’s next Afghan or Iraq style “endless war”?

As one recent intelligence study put it: “The prospect of US being militarily involved in Syria, caught in middle of one of most complex conflicts in recent memory, with shifting objectives & ambiguous endgame, has been met with congressional indifference and public apathy.”

(TLB)published this story from ZeroHedge as compiled and commented on by Tyler Durden.