US Seeks Overturn Of Extradition Ban

WikiLeaks founder Julian Assange, who still languishes in London’s high security Belmarsh Prison, will appear in court on Wednesday and Thursday for a key hearing that could prove to be a potential gamechanger.

The court will decide among other things whether the US Justice Department’s assurances that he won’t face cruel confinement in the US should be extradited are convincing enough to overturn a prior ban on extraditing him. This is precisely what the US is seeking to do after gaining an appeal following the January decision of the High Court which said he’d be facing the American federal prison system’s strict, harsh confinement, likely at a place like ADX Florence supermax.

Ahead of the start of this week’s proceedings, WikiLeaks editor-in-chief Kristinn Hrafnsson said it woudl be “totally unacceptable” and “unthinkable” for the London court to reverse the prior decision, lifting the extradition ban.

“It is unthinkable that the High Court will come to any other decision but to uphold the magistrates’ court decision. Anything else is totally unacceptable,” Hrafnsson said.

“It would be such a stain on the system in this country that I certainly hope there will be enough pressure and realization of how devastating it would be for this country if somehow the judge comes to the decision of reversing the magistrates’ court decision.”

Also not helping the case of the US prosecutor is the recent devastating Yahoo News investigation exposing details of an alleged CIA plot to either assassinate or kidnap Assange, and render him to US soil by force. Both Assange’s legal team and his family – especially his fiancé – have lately pointed out that the CIA revelations alone destroy Washington’s case and standing:

Ms Moris said: “This is a game-changer going into the appeal because it shows the true nature, the true origins, the true criminality of the US actions against Julian and it completely taints any semblance of legality of this appeal going into it.” 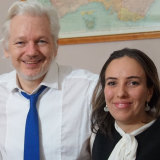 [Julian Assange and Stella Moris inside the Ecuadorian embassy, in an undated picture supplied by WIKILEAKS/PA]

Additionally, Stella Morris, who is mother of Assange’s two sons, believes the CIA has in the past also plotted to kill her. She has at the same time long represented him as part of WikiLeaks’ legal team.

“It felt like we were prey and because I was the person who was closest to Julian, I felt that I was very clearly a target,” she told reporters earlier in London. “I felt that maybe they might beat me up or try to kill me or something to get to Julian because they were desperate to drive him out of the embassy and into Belmarsh prison.”

If the proceedings go in Assange’s favor this week, it’s as yet unclear precisely what would come next, but if the court rules against the US side it would no doubt create huge momentum as a key victory for Assange, potentially making freedom finally within his grasp.

But for now, it seems that the strategy of the US and its intelligence allies, including in the UK, remains to try and erect as many legal hurdles and appeals as possible in the way to block his freedom in perpetuity – keeping him in Belmarsh pending a seemingly endless legal process.