TLB Editors note: Up dates as they occur today will be posted at the bottom of this post.

President Trump announced the apprehension and arrest, and says the suspect will be “prosecuted to the full extent of the law.” 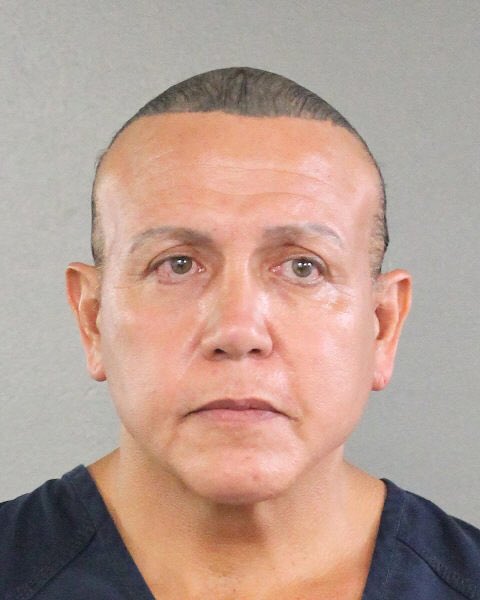 FLASH: Cesar Sayoc, 56, pictured in this booking photo from an arrest, via @browardsheriff

According to the New York Times, citing public records, Sayoc has a lengthy criminal history dating back to at least 1991, including felony theft, drug and fraud charges, and being accused of a bomb threat.

Based on the Facebook posts, the person identifying as Sayoc was fixated on the idea America would be at risk of terror under Clinton.

“Wake up America FBI director warns an attack like never seen before here in America will happen. We can’t afford risk American lives with Hilary Clinton. They will infiltrate refugees guaranteed,” the person wrote. –Yahoo!

According to The Times:

• His criminal record from the Florida Department of Law Enforcement indicates that at the time of his last arrest in 2015, he was 5-foot-11 and 215 pounds. He has brown eyes, black hair and a scar on his left arm, the records said, and was born in New York. The records listed Mr. Sayoc’s occupation as “manager.”

• According to a 2012 bankruptcy petition filed in Miami, Mr. Sayoc resided at the time at his mother’s home. “Lives w/mom,” a handwritten note on the petition said. “Has no furniture.”

More from the Daily Mail:

He claims to be Native American, and according to a picture posted on his social media page, he is a member of the Seminole Tribe of Florida.

Other information from his LinkedIn page suggests that Sayoc is Filipino.

The profile includes dubious claims that could not be immediately independently confirmed, including that Sayoc is a promoter for male striptease troupe Chippendales, and that he is enrolled in a veterinary medicine program. –Daily Mail

Federal authorities arrested a Florida man at approximately 10:30 a.m. Friday in connection with a spate of suspected explosive devices mailed to prominent Democrats and anti-Trump figures over the past week.

“He Was Crazed”: What We Know About Suspected Mail Bomber Cesar Sayoc

(TLB) published this story from ZeroHedge as compiled by Tyler Durden with our thanks.

Planned Parenthood Admits… We Are Paid To Do Abortions’